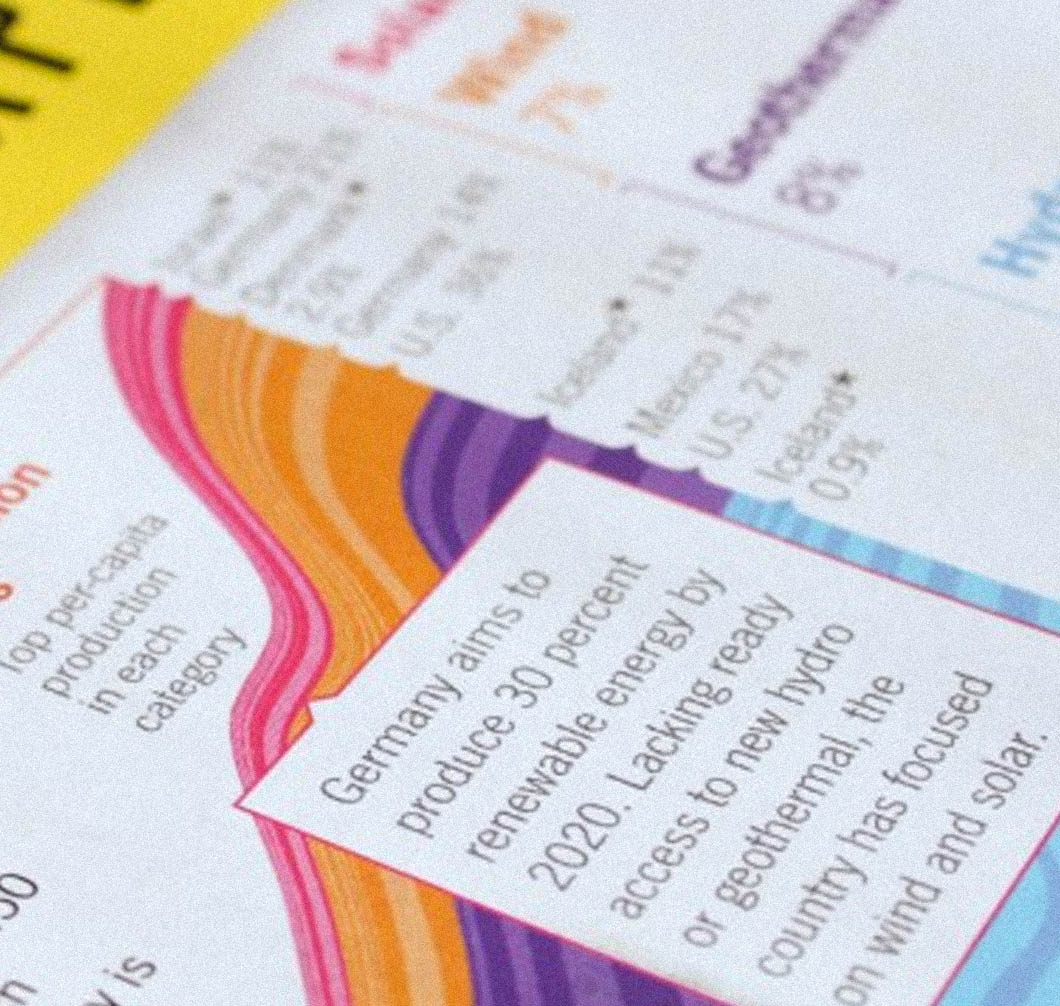 k
n
t
Fathom
Treading Lightly
Popular Science publishes a special energy issue every two years. We designed a 2011 spread that looked at where U.S. energy comes from, where it goes, and how much is lost along the way. The biennial is upon us, so we were excited when Katie Peek got back in touch for this year's issue. She asked us to research the innovations in renewable energy production that were taking shape worldwide, and to propose a couple of stories. 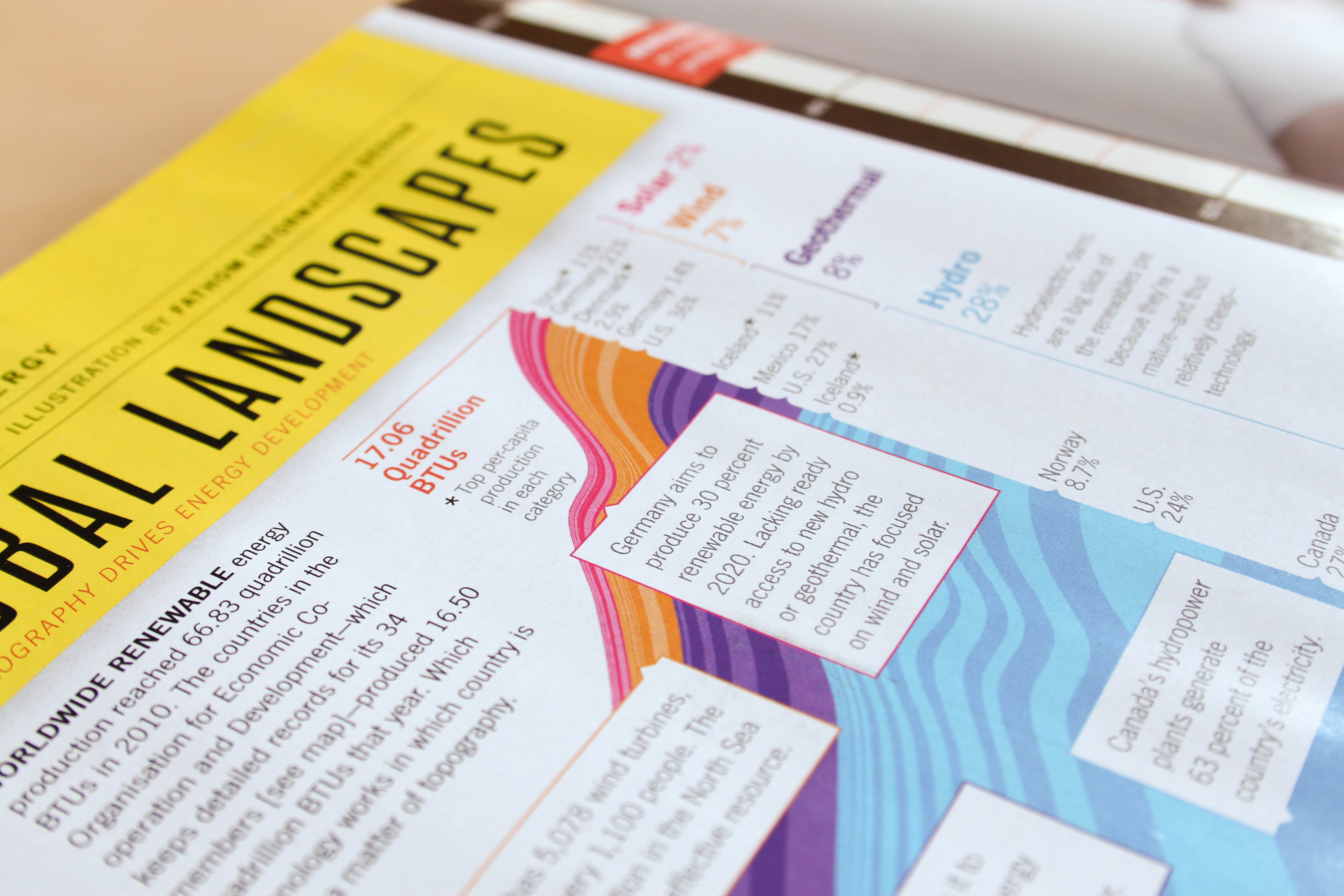 Detail of our graphic in the 2013 Energy issue.

The Organisation for Economic Co-operation and Development (OECD) provides a dataset on the production and consumption of renewable energies in thirty-four countries around the world. After plotting out the data by country, renewable source, and per-capita, the graphical narrative began to take shape. We collaborated closely with Katie on the layout because we were designing the spread for print. As you may know about the publishing world, a project’s not finished until it’s in the press. Katie kept the layout flexible until the graphics sat well with the text. Comparing this story with the 2011 issue, we were pleased to bring a more positive picture of global energy production into focus. The final spread represents the countries producing the most energy in each category, and also shows the percentage of their total energy production that comes from renewable sources. The online version is available here. 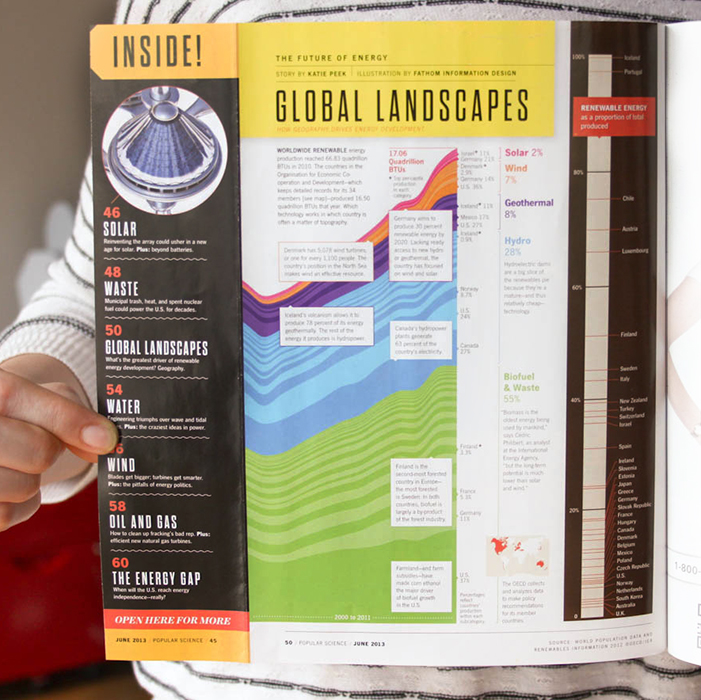 Alex waited outside the newsstand all night so she could be first in line for the issue on its official sale date, May 21st.

Process for structuring the data

We initially looked at the data by country and energy source to find which nations were making the most progress and which energy sources were generating the greatest impact. 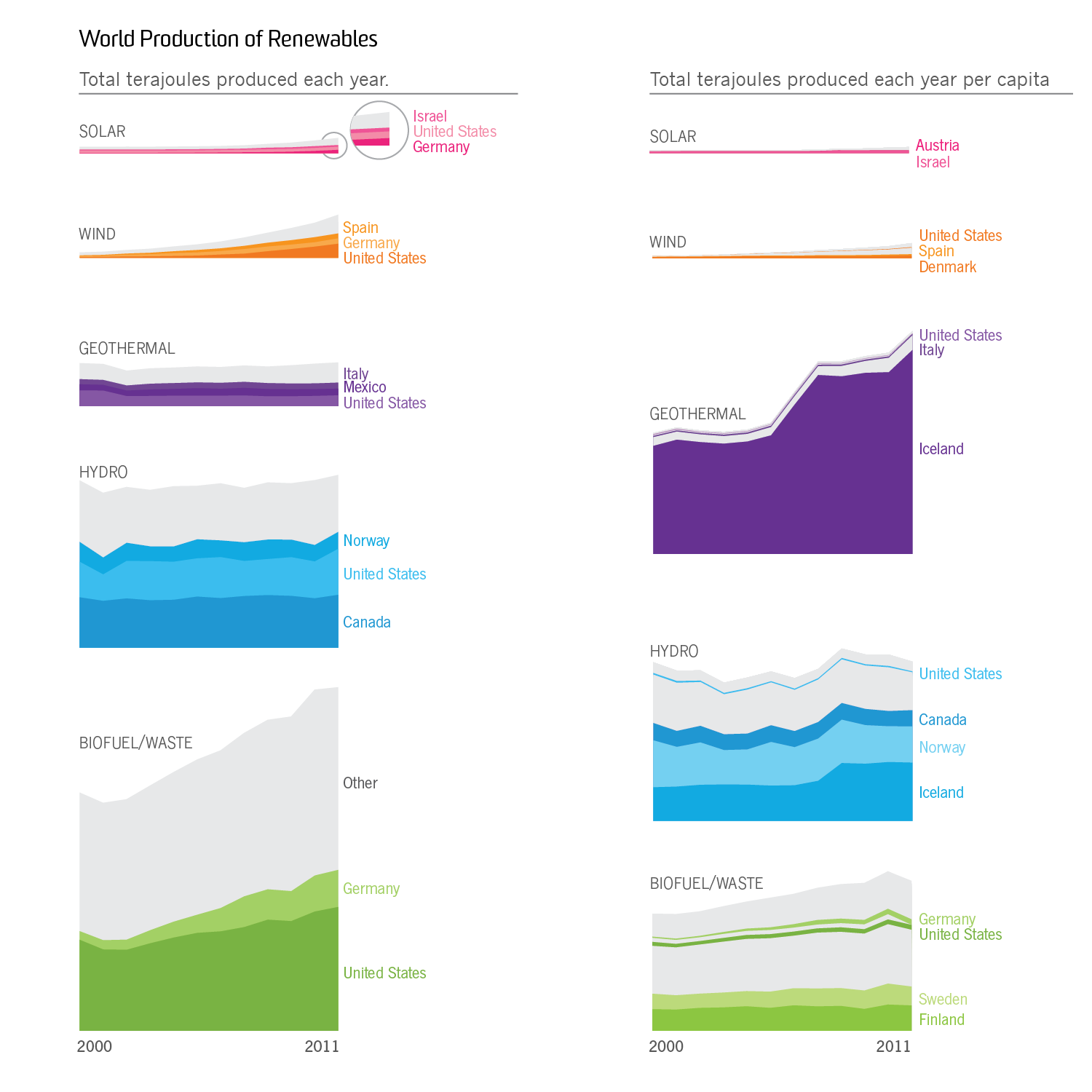 In an early sketch, we compared the countries that produced the most renewable energy with those who produced the most relative to their size. Nordic countries like Iceland, Finland, Sweden, and Denmark, which use their coastlines to their advantage, had a prominent presence in the per capita view. Note: The vertical axis of total TJ produced is not measured to scale with the per capita axis of TJ produced.

We also considered slicing the data by energy source to show which renewable categories were growing most rapidly. While wind and solar energy made up less than 10% of total renewable production, they’ve also experienced impressive rates of growth since 2000.  ­ 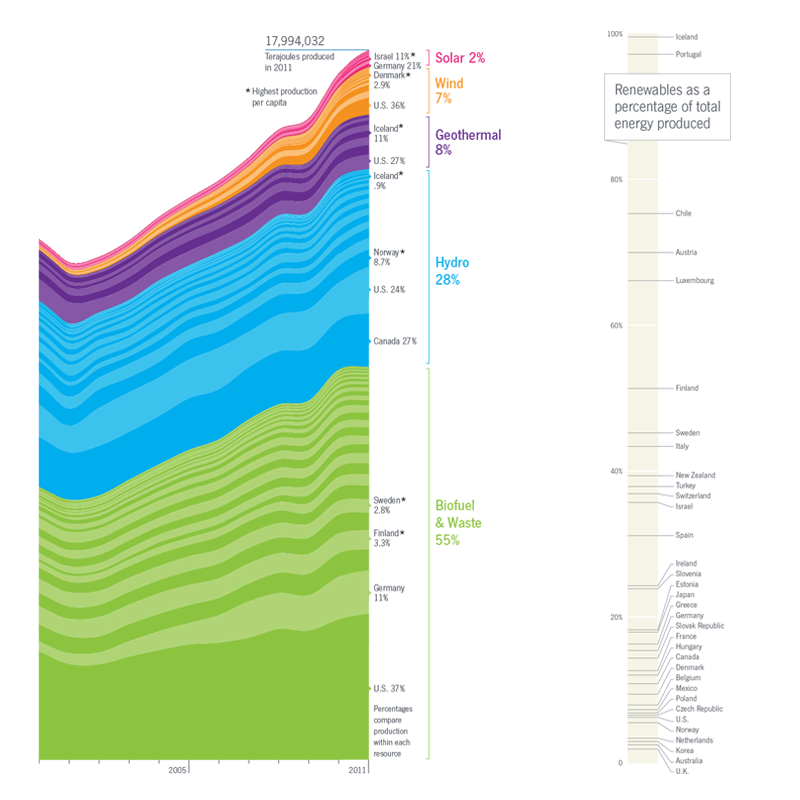 The left graphic shows the number of terajoules produced by each renewable technology over the past decade. This graphic was generated using a tool we created to design flow charts around varying parameters. This one is nicknamed “wiggle flat-bottom.” The graphic on the right shows the percentage of renewable energy that countries produce of their total energy production. The United Kingdom produces only (4.6%) while Iceland produces an astonishing (98.3%) renewable energy, most of which comes from geothermal.

So what’s the next step in renewables, you might ask? For now it looks like solar and wind energy are making headway. In the meantime, we’re pretty excited about the countries that are forging ahead and catching the waves.

This post is brought to you by Terrence and Alex.