We looked at dozens of datasets relating to The Way Forward (TWF), a ten-year financing plan proposed by MassDOT in early 2013.  Our challenge was to take the budgets, pro formas, development plans, and proposed legislation relating to TWF and create a set of assets that could be used flexibly by T4MA and other advocacy groups as the plan made its way through the legislative system. One day an infographic might be dropped into a PowerPoint and used in testimony at the State House, and the next it might be printed in a brochure and distributed to the sixteen Regional Transportation Authorities (RTAs) in the state, so the design needed to be adaptable. From the beginning, we focused on how these proposals would impact Massachusetts as a whole. With Boston's transportation network dominating the rest of the state in terms of size and expense, it is easy to see how residents of Western Massachusetts, for instance, could feel like all of their tax dollars flow eastward. We took special care to find and highlight examples of regional equity in the proposed plan.

Chapter 90, or apportionment funding, refers to the money distributed by the state for capital improvement projects in highway construction and preservation. A key part of the MassDOT plan called for increasing apportionment statewide from $200 million to $300 million each year. Each town’s percentage of road miles, population, and employment is factored into a formula that determines the amount of the statewide apportionment it will receive. We measured the level of funding each region would earn based on its density of road miles, and found that in both urban and rural areas, increasing the statewide apportionment would enable improvements in roads, highways, and bridges across Massachusetts. 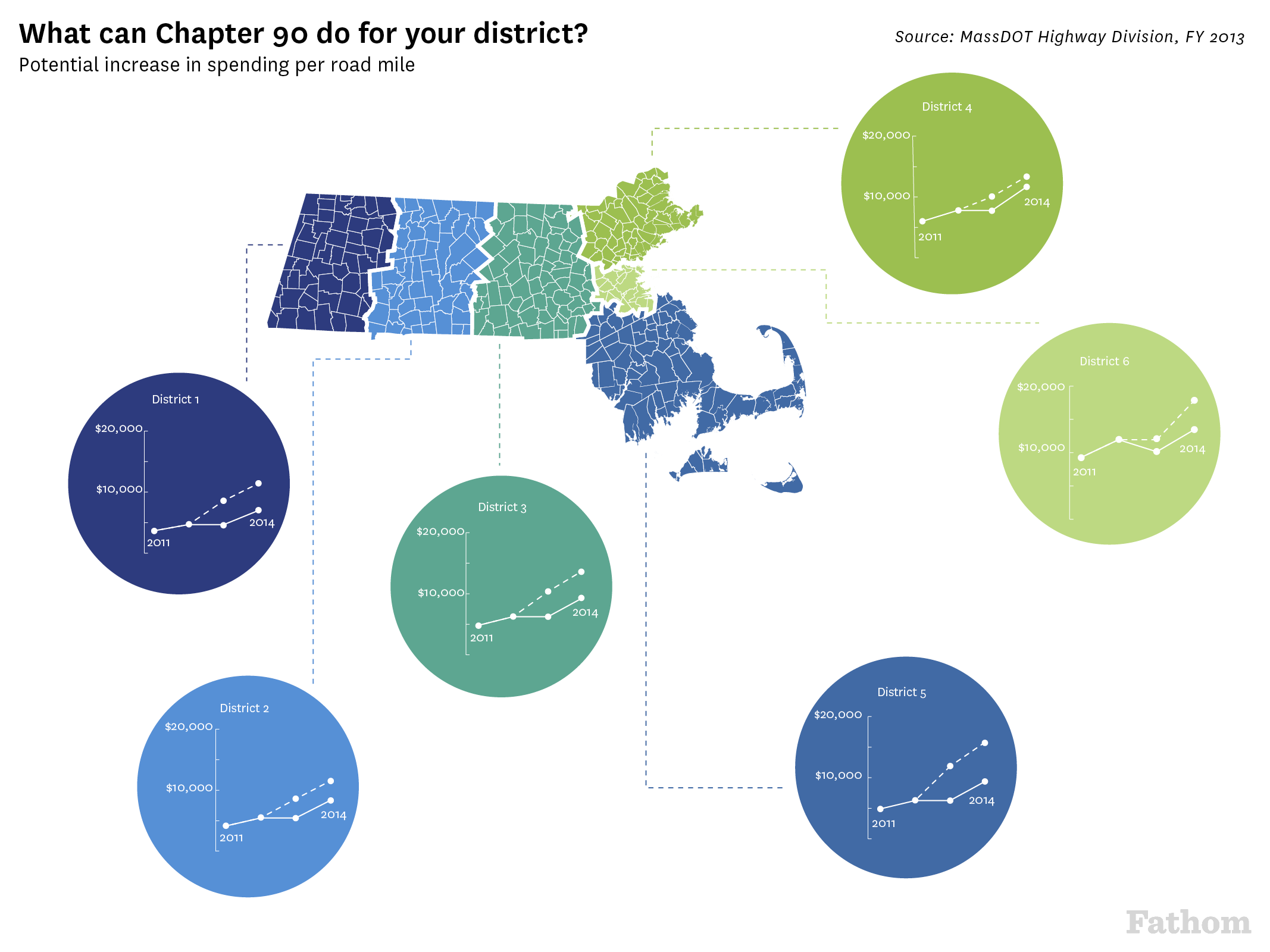 Increasing the Ch. 90 Apportionment from $200 million to $300 million would allow for significant roadway improvements across all regions of the state.

During a conversation with the folks from T4MA, we discussed how investment in public transportation is also, in a way, an investment in improving other regional infrastructure. The availability—or infrequency— of public transportation can determine who has access to certain jobs, schools, hospitals, and other institutions. We were compelled to create a graphic that illustrates the disparity of public transit in different regions of the state. The variance of operation hours within each RTA testifies to the need for more dependable, regular hours for bus services statewide. 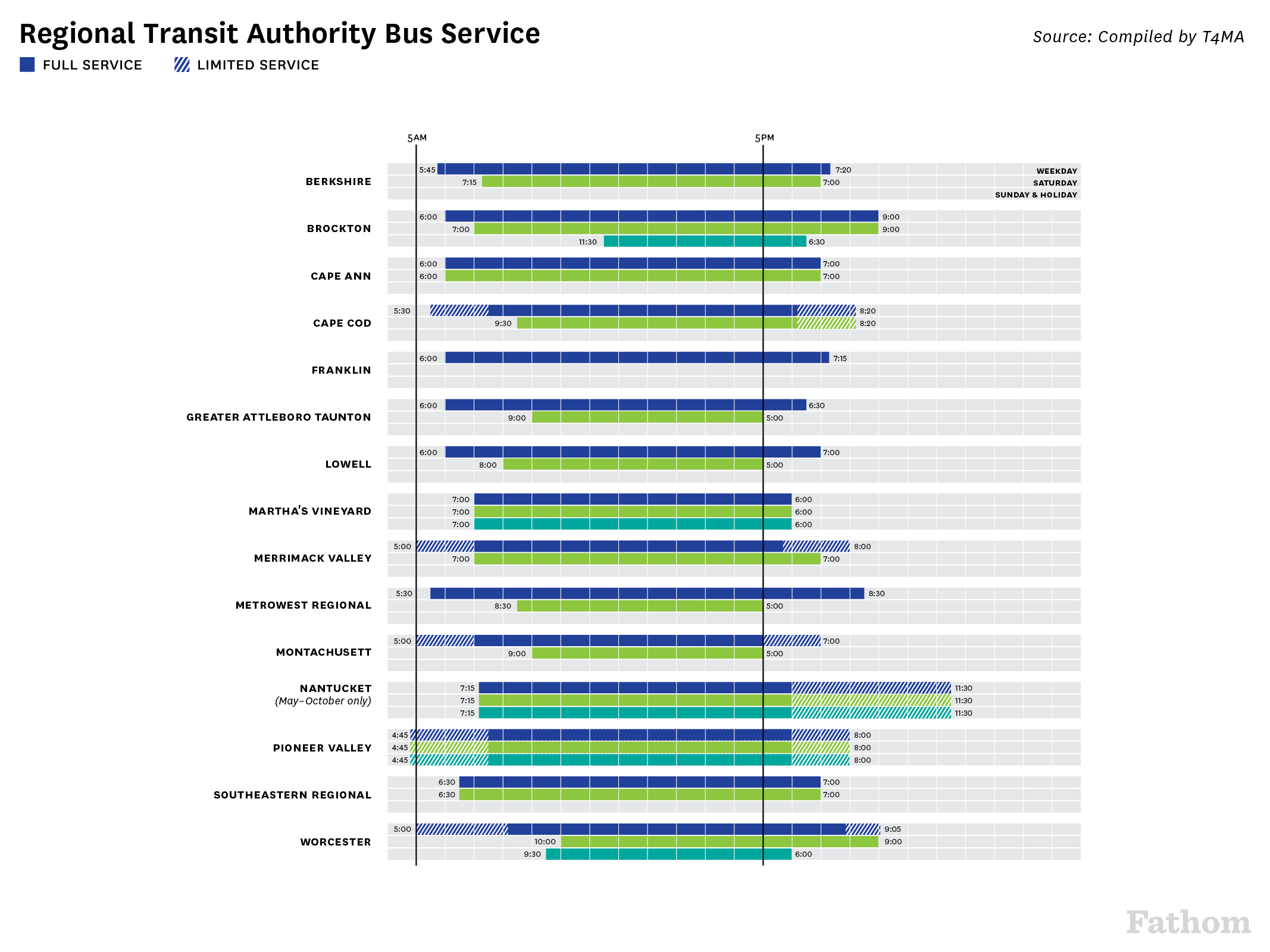 Due to insufficient funding, many of the regional transit systems are unable to provide service in the late evening and on weekends. Short service hours are problematic when people in certain areas of the state—especially in economically depressed areas—don’t have the means to access job sites, schools, healthcare facilities, grocery stores, and other locations that are part of a daily routine.

How do state revenues actually make their way to transportation agencies? The way money flows through any state is complicated, but in Massachusetts things are particularly complex. Using data from a recent MassDOT budget hearing, with input from researchers at the Dukakis Center for Urban and Regional Policy at Northeastern, we generated a picture of where the state's transportation revenues come from, and what financial structures they move through as they make their way to their intended sources. The overwhelming takeaway for us was that almost half of the state's revenue goes toward paying off existing debt. 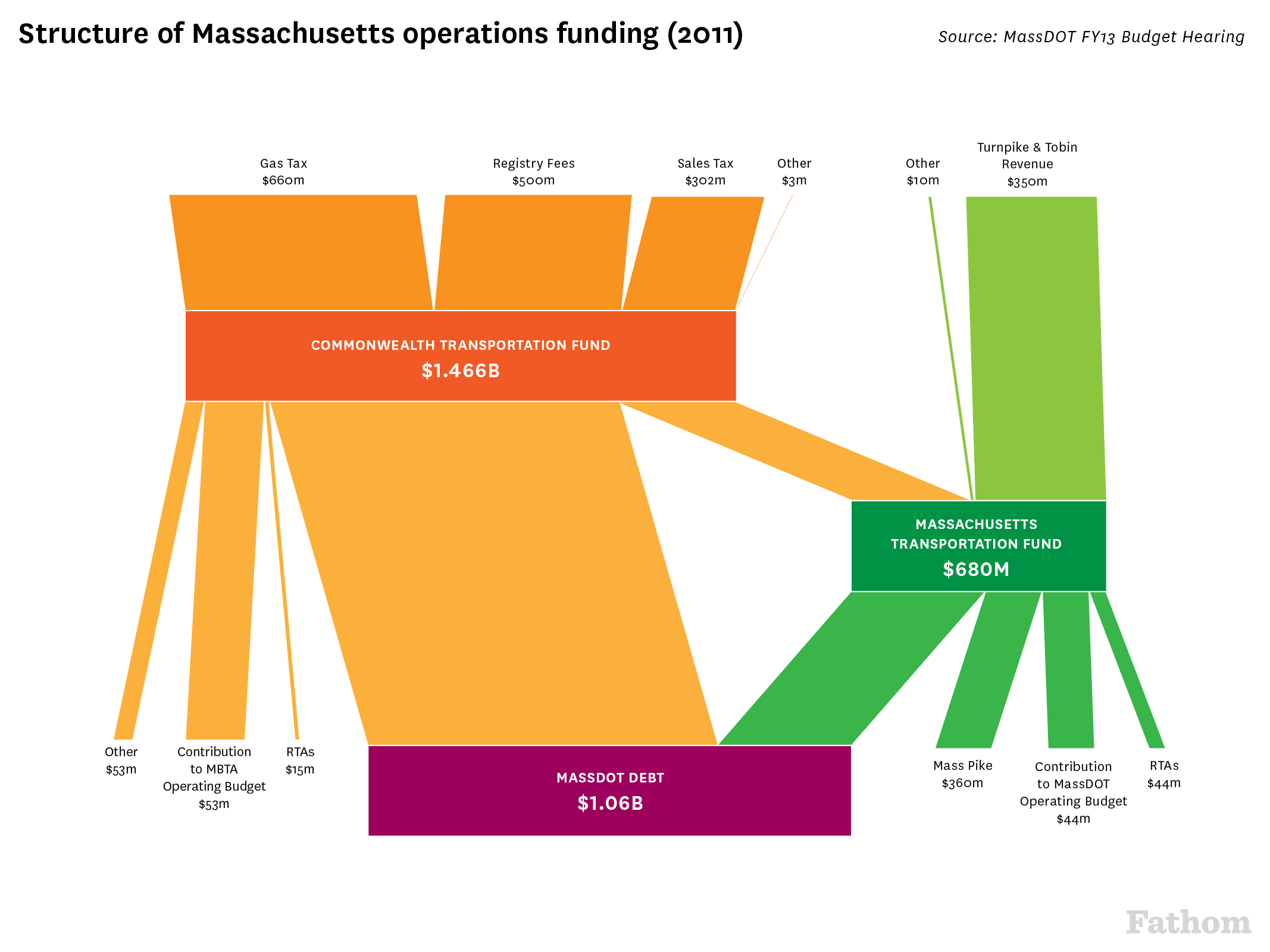 The Commonwealth Transportation Fund (CTF) is subject to appropriation by the MA legislature, which mandates that revenues be put toward debt before funding the MBTA or the RTAs. In the past, this has meant that there is not enough funding left to maintain a state of good repair (SGR) within the Commonwealth's roads, bridges, and railways.

The Massachusetts Department of Transportation oversees (among many things) the state's roads and highways, coordination of the sixteen RTAs, and maintenance of vehicle registration records. We looked at pro forma budgets released by the state and built a picture of what MassDOTs revenues and expenses will look like over the next few years. (It should be noted that the pro forma projections extend to the next twenty-five years, but we chose to focus on the immediate future.) The current fiscal year benefits from a small budget surplus in 2012, but as additional development projects come online, significant revenue gaps start to form from 2014 onwards. 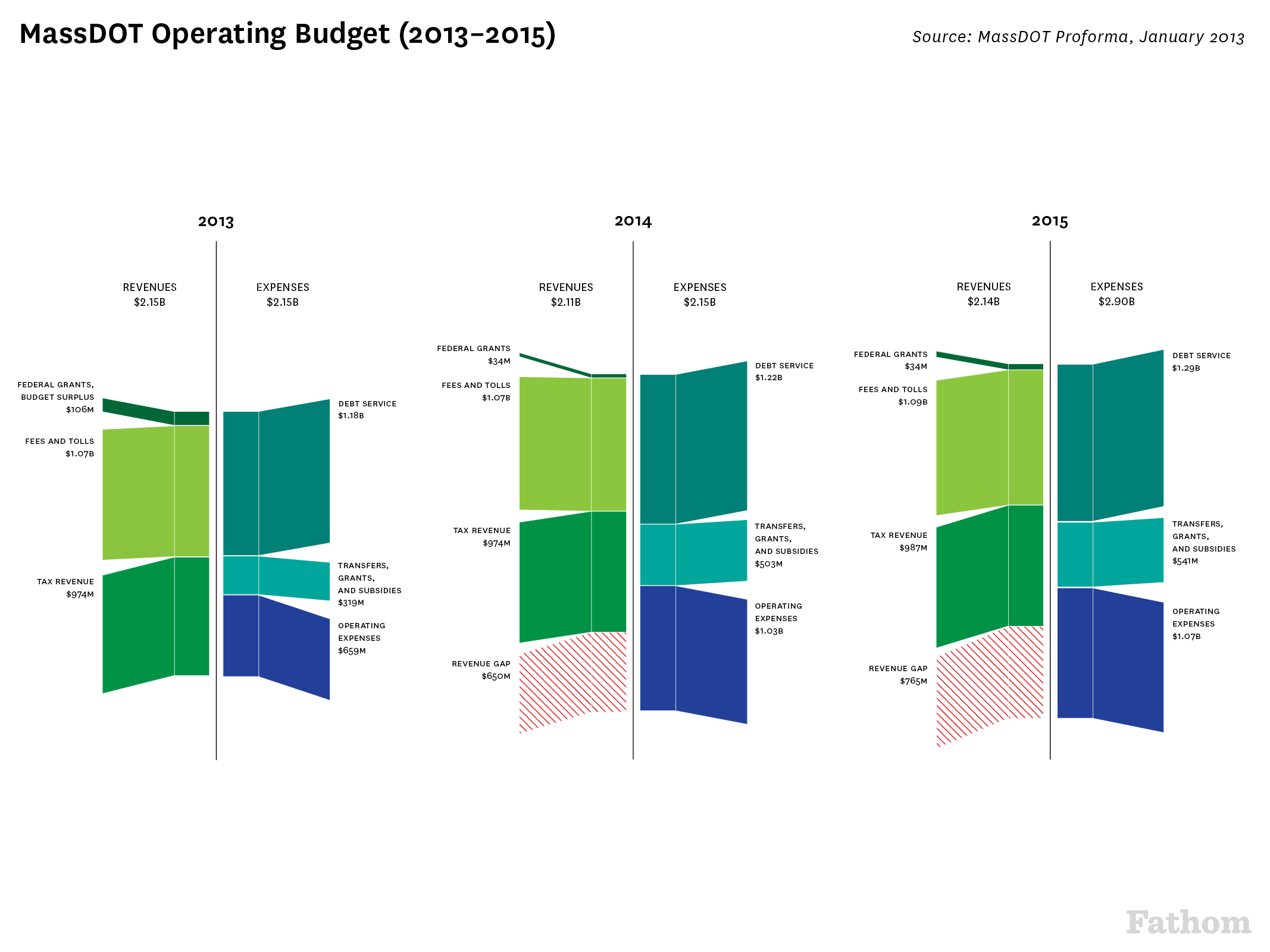 Red hashed lines indicate the gap between revenues and expenses for each fiscal year. Even if MassDOT minimized its operating expenses, the state would still need a solution for its growing debt.

We then zoomed in on the year 2015, on the far right, to take a look at the exact line items that contribute to these totals. On the revenue side, the bulk of funds come from the state sales tax, gas tax, and fees from vehicle registration. On the expense side, the majority goes toward paying off old debt. 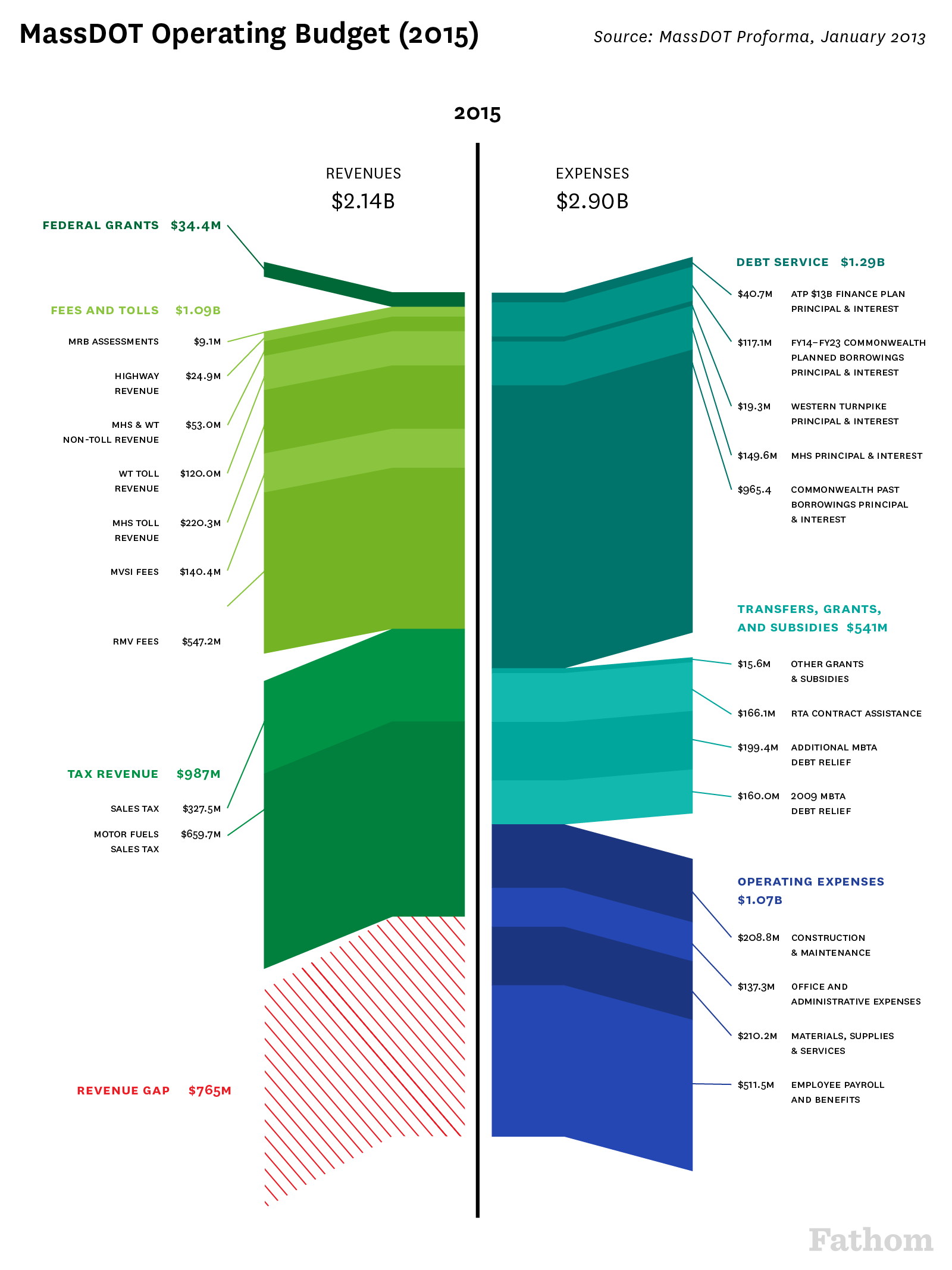 A detailed breakdown of where the money goes in a typical budget year.

The Way Forward called for $13 billion in additional funding over the next ten years. $684 million was needed to simply operate the transportation network we have today, roughly $5.2 billion to invest in road and bridge upgrades across the state, and $3.8 billion in transit expansion projects to bring economic growth and stability to targeted regions. The plan provided detailed accounts of the state's financial needs, but nothing of the details of its ongoing implementation. The monumental challenge of raising even a fraction of that money remains with the State House, and has been a source of contentious debate. In early April, the Massachusetts House passed a bill providing $500 million in additional funding, while the Senate passed a version with $800 million a few days later. The bill is currently being reviewed by a joint conference committee.

In the meantime, we'll keep doing our part to fund transportation improvements—one CharlieCard tap at a time.