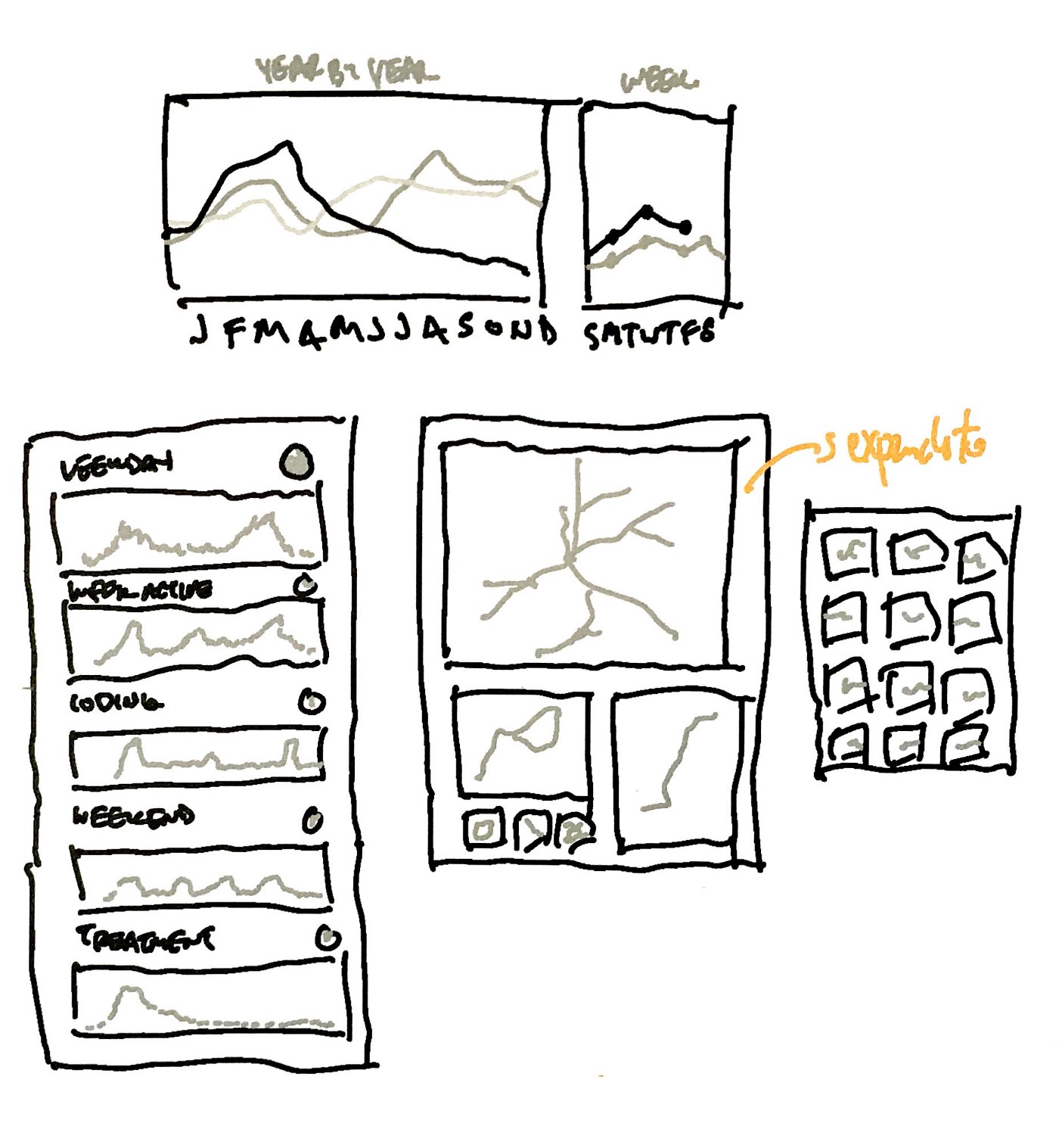 k
n
t
Fathom
Context-Driven Activity Apps
Before we went on break for the holidays in December, the office got together to brainstorm solutions to a question we’ve been thinking hard about over the past few months: what does a good health app look like? “Good,” of course, can mean countless different things. It could mean that it’s good at reminding you to exercise and eat well, good for logging personal health information, or good at predicting when a chronic condition may flare up.

The answers within the office varied widely, but for the most part people focused on apps in one of two categories: 1) exercise and activity tracking apps and 2) holistic health apps, or apps in which users log various health factors not necessarily tied directly to exercise — food consumption, chronic pain, sleep quality, etc. There are plenty of apps already on the market in both categories, each with their own strengths and weaknesses. But what seems to be missing is a complex app with enough contextual awareness to understand that a user is a whole, living person, not simply a thing that marches robotically to 10,000 steps each day.

The Apple Watch, with its exercise rings, is a great example of an exercise device that lacks user context. The Apple Watch wants you to reach 3 goals before midnight each day: 1) complete 30 minutes of exercise at or above a brisk walk, 2) move/stand for at least one minute of the hour for 12 hours in the day, and 3) burn a certain number of calories (the user gets to decide how many). The watch can send reminders throughout the day to help users work towards these goals, and the goals are reasonable for many people on an average day. But what happens when you get sick and don’t want to be reminded all day that you’re not standing? There’s no way to turn off notifications for a day without turning them off completely. What if you’re in a three-hour long meeting or at the movie theater? What if the watch could refrain from telling you to stand during those 3 hours if those events are in your phone calendar?

A context-driven exercise app could have options for importing appointments and calendar events. With access to your calendar, an app could
1) offer the option of muting exercise reminders during those events, and
2) build context around your daily exercise patterns. Those of us who are serious about tracking exercise will likely want to look back at past patterns, and a context-driven exercise app could reveal how certain activities affect our daily exercise routine. Don’t remember why your step count was 4,000 steps below average last Sunday? Apple’s Health app can’t tell you, but the Fathom Health App knows perfectly well that “The Great British Cake Off: watch all 9 cake episodes in one sitting” had been on your calendar for weeks.

Exercise apps can also use context to help the user gradually work small pieces of additional exercise into their pre-existing routine. Having recently rung in the New Year, we’re all determined to go the gym 8 days a week and eat half a cookie every 3 months. But just in case that doesn’t work out, it’d be great to have a backup plan. For those of us who are determined to fit more activity into our day, but either hate or don’t regularly have time to set aside trips to the gym, small changes to our daily routine could make a huge difference. Your phone certainly knows your daily routine based on step count and GPS patterns; what if an app could make suggestions to adjust that routine? This kind of feature could make an app feel like it’s actually trying to help you improve your activity habits, rather than serving as data dump to log all the times you lifted weights at the gym for 5 minutes. 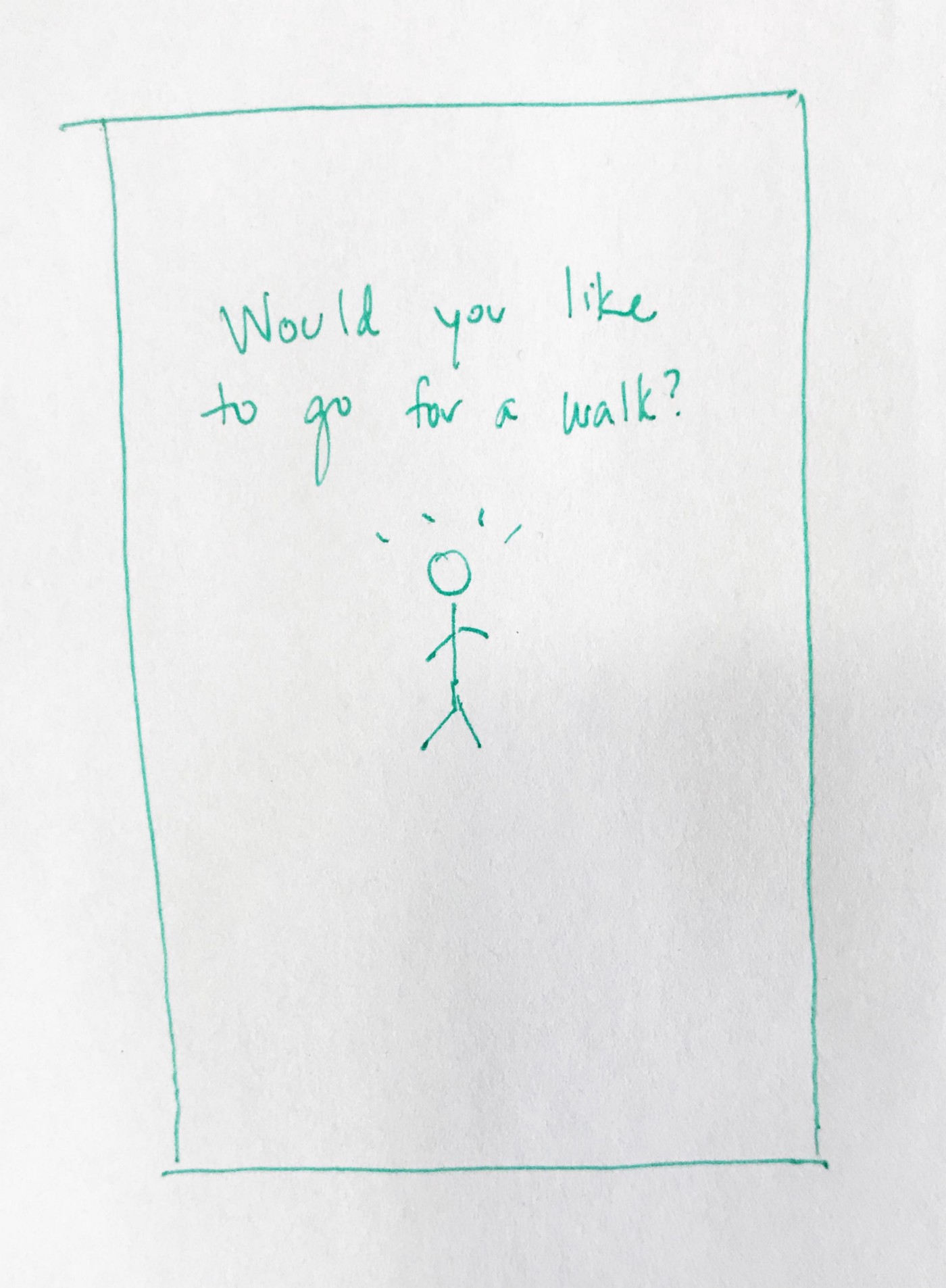 On the other side of the health app spectrum, holistic health apps are also begging for a do-over. One of the biggest issues the group addressed in the context of these apps is incentivized reporting. Holistic health apps only work if you regularly provide the app with personal details about how you’re feeling so that the app can start to look for patterns and determine suggestions. But let’s be honest: it can be hard to get in the habit of logging things every day or week.

Like it or not, using your phone to do mundane things like logging the tofu you ate for dinner is more fun when it’s fun, and when it’s fun you’re more likely to do it. Typing out of a list of the vegetables you ate for dinner isn’t as fun as, say, picking out colorful stickers with cute illustrations of broccoli. Attempting the impossible task of describing a migraine in words probably sounds migraine-inducing, but imagine if you could scribble all over the silhouette of a body to describe how it felt with colors and pictures?

If you’re thinking that cartoon broccoli sounds a little goofy, you’re not wrong. Those of us who were interested in holistic health apps felt that we’d be more likely to stick with an app for the long term if it added a bit of cheer and whimsy to our day. Even re-contextualizing reporting as an opportunity, rather than a task, is a step in the right direction. Instead of being told, “It’s time to log your daily symptoms,” it might be more pleasant to be asked, “Do you have anything to report today?”

The other issue we focused on for holistic health apps was their power to reduce stress about recurring health issues, or as we put it: eliminate feeling stressed about feeling stressed. It’s easy for this stress to compound and spiral out of control; in the moment, we don’t always stop to wonder why we feel bad, and the stress of not understanding what’s happening to our bodies makes it even worse. But what if an app could remind you that you’re probably stressed because it’s January and there are only 2 minutes of sunlight and you always feel stressed around this time? There are dozens of applications of this, from chronic pain to PMS to mental health.

Finally, there are some things that both types of apps should be concerned with, and privacy is a huge one. For a health app, there are privacy concerns beyond “is this company selling my data.” (We wouldn’t, by the way.) An app developer also needs to consider the question, “on a scale from TI-84 to 2001: A Space Odyssey, how creepy is this app?” There’s a lot of data that app developers have access to and could theoretically use to create enhanced features within the app, but should they? For example, your phone could theoretically use your GPS location to deduce that you just stopped by Dunkin’ before work and send a notification asking, “How’s the donut?” …but should it?

When you’re designing an app that requires tracking personal health information every day, where’s the line between helpful and invasive? What kind of assumptions can an app make that will help you track your health as accurately as possible without making you want to throw your phone in a dumpster and move to a remote cabin in Northern Canada? A less invasive method of asking a user about breakfast might be to send a notification prompting, “Any breakfast to log today?” Your phone could remind you you’ve been sitting for a long time without being creepy by asking, “Want to go for a quick walk?”

Clearly, even within our small office, people picture very different things when we say “health app.” With that in mind, we’re not expecting to make an app that’s going to work perfectly for everyone. Whichever direction we go in, however, we can guarantee that we’re going to work hard to make our health app as smart, helpful, and empathetic as possible.