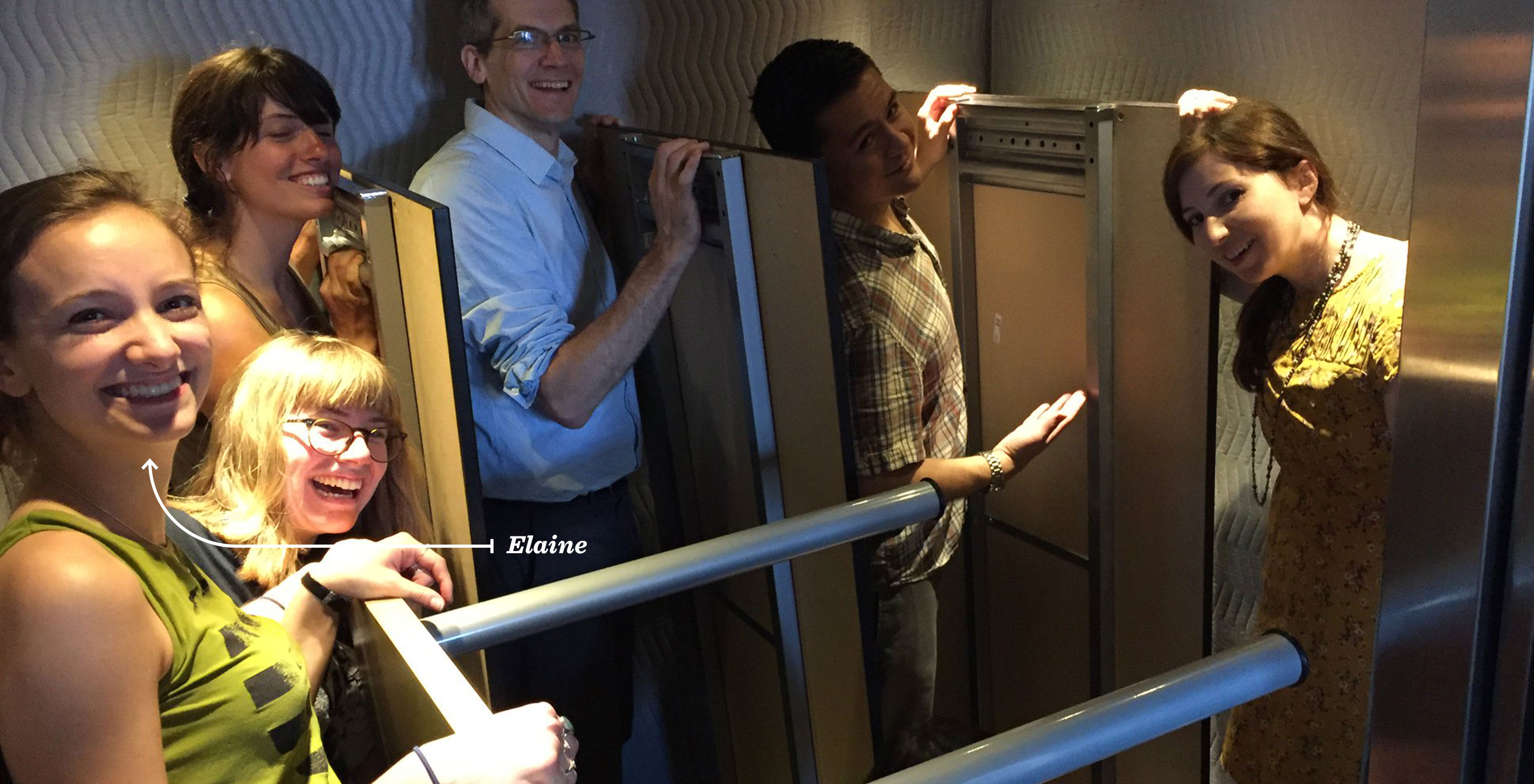 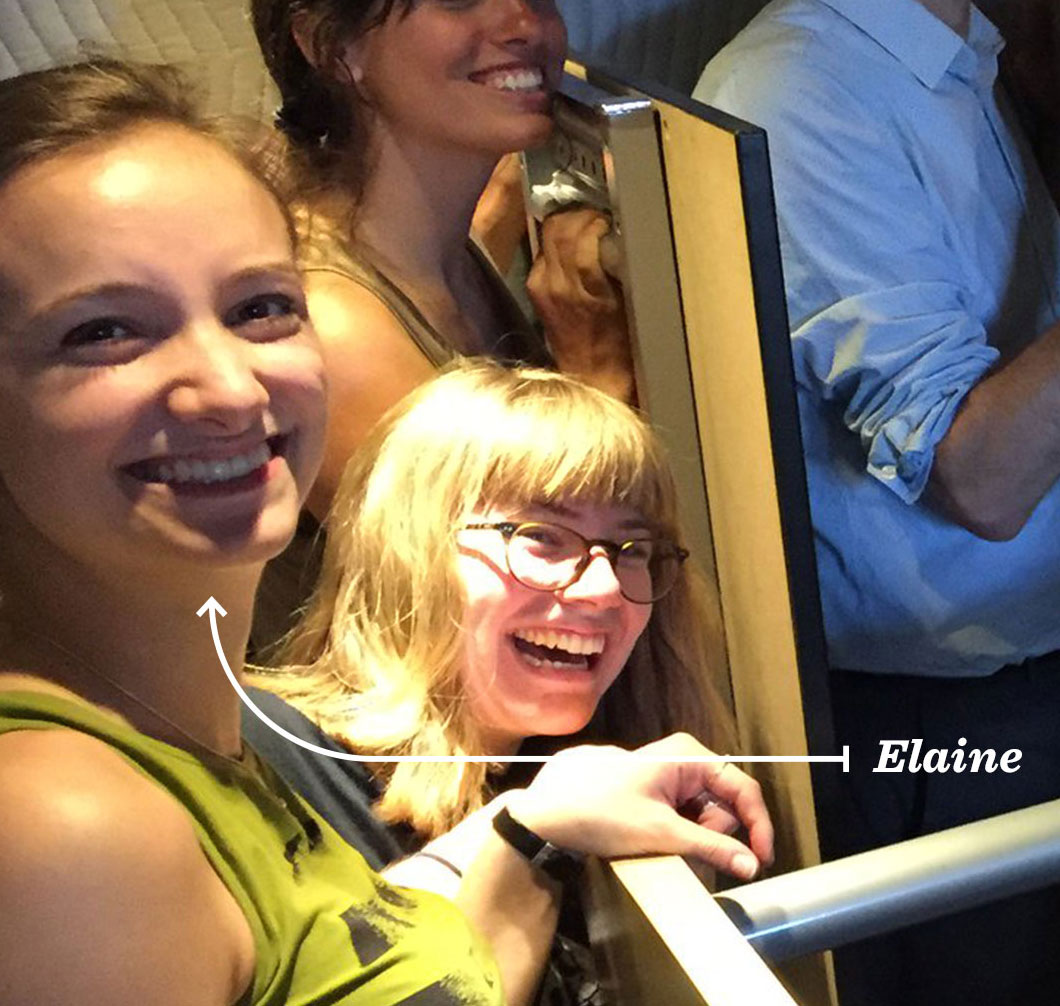 k
n
t
Elaine
Elaine's summer of research
This summer I researched and analyzed data, learned how to code in p5.js, and participated in the iterative workflow of Fathom. Additionally, I took a trip to the aquarium on my second day of work, practiced building Ikea furniture for the new office, and (unsuccessfully) tried to convince everyone that crumpets are delicious. 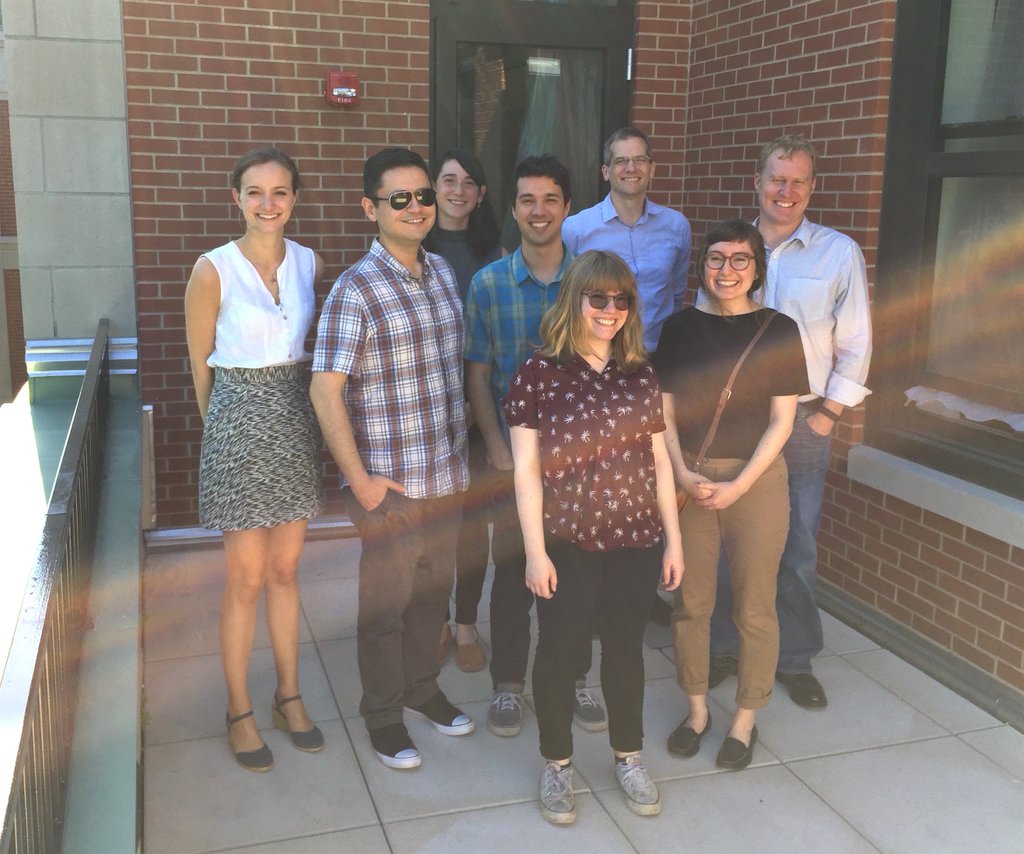 I spent my first month at Fathom diving into the world of wrongful convictions. I was so amazed, and shocked, when I read the draft of the ProPublica article, Busted. It was an engaging piece to read, but even more exciting to look at the data that supported the article. I found it incredible that all these variables existed—plea date, lab date, lab result—yet at each step a system failure still occurred. 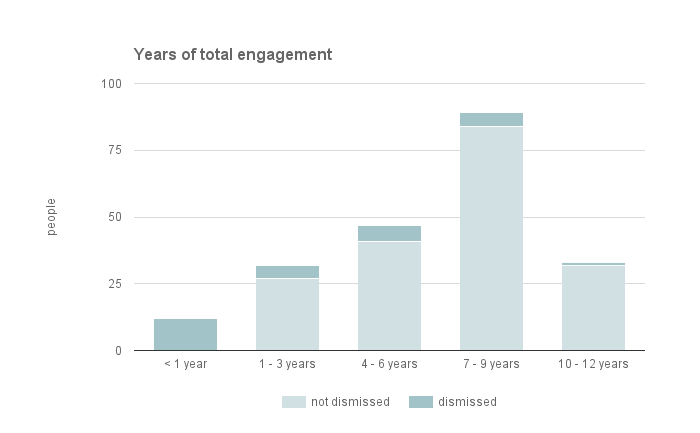 Preliminary look at how long people were, and still are, engaged with the wrongful conviction.

Trying to organize and understand these variables in a way that made sense was challenging. It helped to identify the points in the article that were complicated. For example, the sequencing of events was crucial to the story, yet utterly confusing because at each stop the proper order was reshuffled. 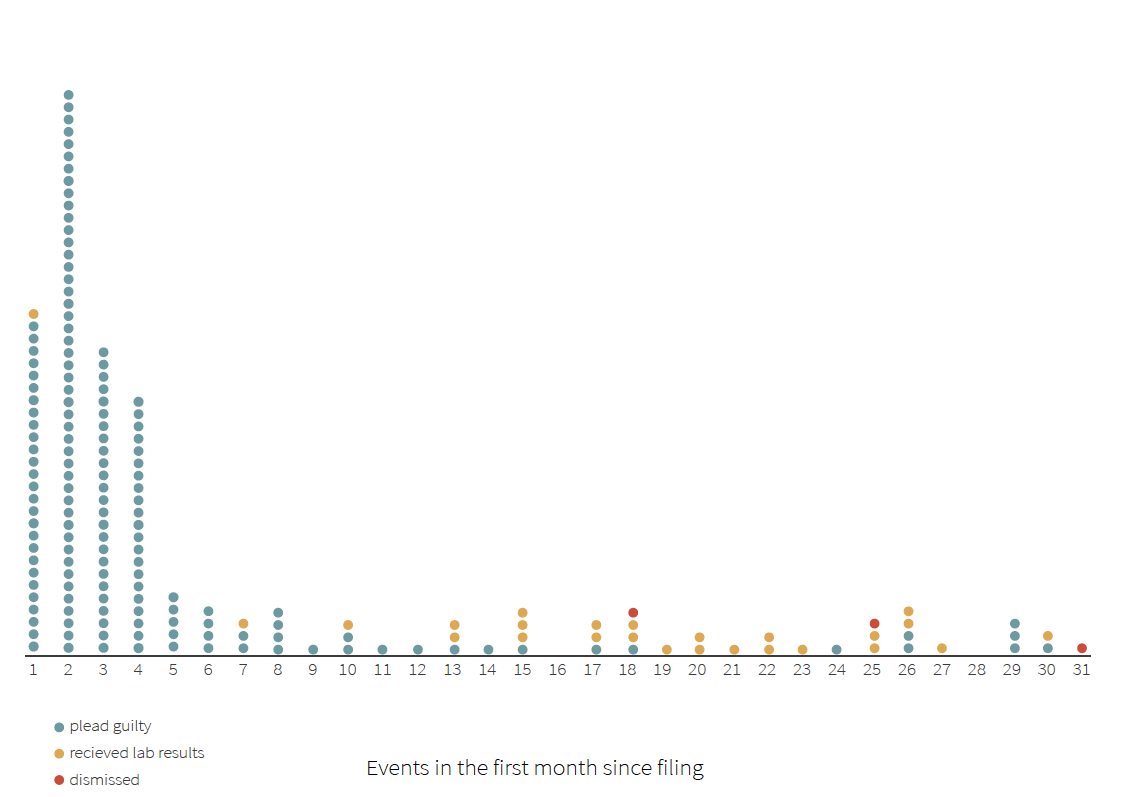 Tracking the frequency of events in the first month after individuals were arrested.

In the short span of the ProPublica piece I got to experience and participate in the Fathom workflow. The article provided the background and research for the piece, but the data was everything—it revealed the complexities and supported the widespread nature of the narrative. The data was where the team started before jumping into portraying the narratives of time, demographics, and sequencing. Through the ProPublica immersion, I came to fully understand the importance of iteration, because it happened at every step: data cleaning, variable calculation, analysis, development, design, and text editing until we reached the final. 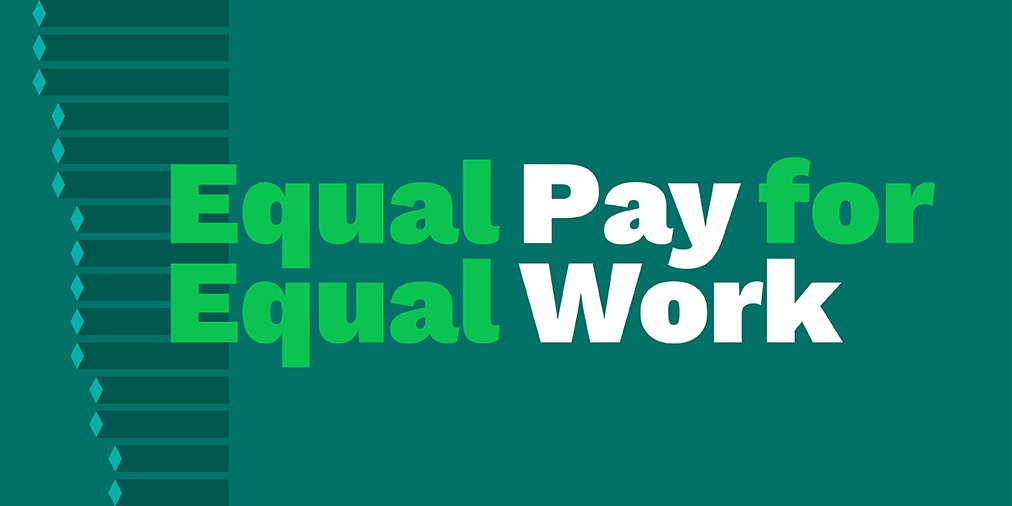 Check out the final piece here.

I also worked with Olivia and Paul on a piece for Women's Equality Day—August 26—not every day as we would like. Using national data on job earnings, we analyzed the idea of equal pay for equal work. People often throw around the phrase “women make 81 cents on the dollar” or “78 cents on the dollar,” but we wanted to nuance that figure in order to show what women really earn at the same jobs as men.

The data is very granular; job titles get as specific as “extruding, forming, pressing, and compacting machine setters, operators, and tenders.” However, despite the detailed 550+ occupations each year in the original data, only about 100-115 have annual reported data for both men and women. Even with this decreased data pool, we had some interesting findings. In 2015 alone, women in only 5 of the 119 jobs made more or equal to their male counterparts. Additionally, it’s right to question the generalization that women make 81 percent of what men make for the same job. In 2015, women made anywhere between 56 and 111 percent of what their male counterparts made. 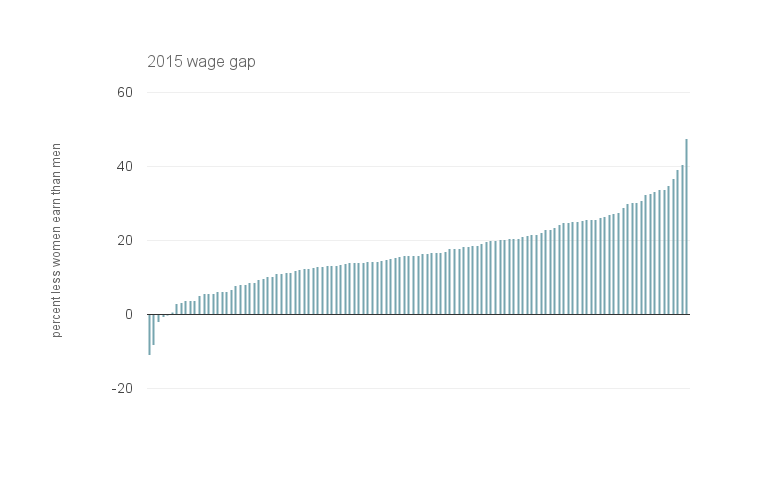 2015 wage gap: percent away from equal pay that women earn.

In 2015, the 5 jobs where women made more than their male counterparts were:

These jobs are spread across all industries, and differ by year. Similarly, the pay gap exists in the vast majority of jobs, regardless of industry. 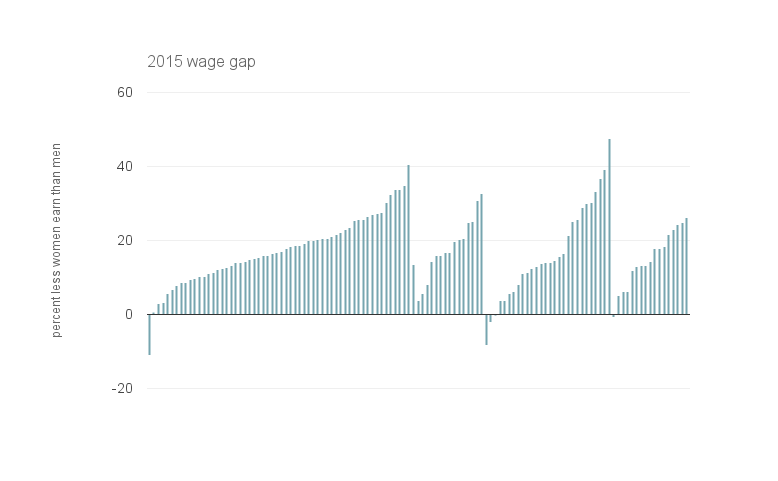 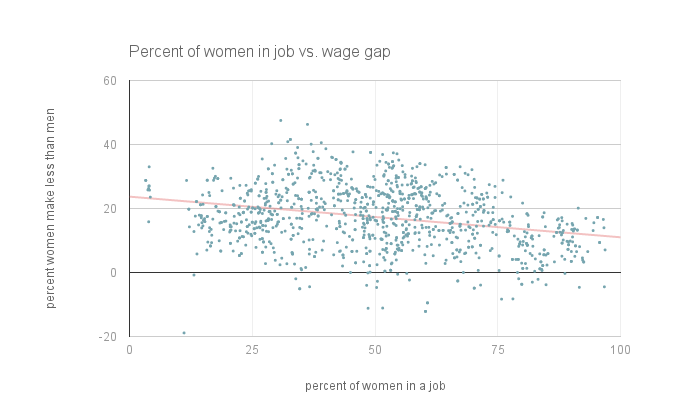 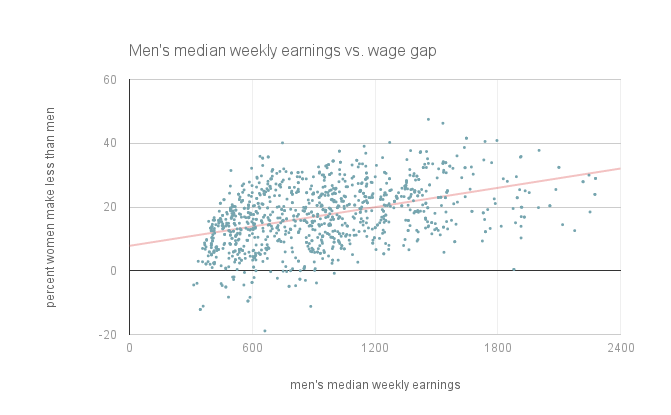 The final project I worked on this summer was independent research on sea level rise. I first became interested in this topic within the field of international law with the idea that there are not existing structures to handle climate refugees and disappearance of parts of, or complete, nations.

I started my research by scoping the existing data, and settling on data from the NASA Socioeconomic Data and Applications Center (SEDAC) at the Center for International Earth Science Information Network at Columbia University. This source provided country-level data for the variable “percent of country population living under a certain elevation.” I used this variable as a prediction for the people who would be impacted by sea level rise even though not everyone would be equally affected due to the uneven nature of sea level rise and different mitigation capabilities. I selected this variable for 1 meter, 3 meters and 5 meters given the incremental and unknown aspects of sea level rise.

Once I started looking into the relationships between countries and regions given the percentages, one of the first calculations I made was the conversion from the percent of the country population to the raw number of people. This started to shape the direction of my research because the countries with the highest percent of the population affected were not those with the most people impacted.

I think the metric we use to quantify the effects of sea level rise can alter the perceived danger, and change the narrative regarding the mitigation and adaptation response. Focusing on the percentage of the country population values the nation, culture, community, language, history, and heritage. On the other hand, quantifying the population that would be impacted recognizes the individuals, families, and lives affected. Both are important, and I will carry this question of how the metric changes the response into future research.

Another aspect that interested me from the data was which regions or countries would be the most impacted. In conjunction with this I wanted to incorporate the variable of development, which impacts a country or region’s ability to mitigate or adapt to the impacts of sea level rise. In my final visualization I decided to use GDP per capita as this indicator.

Only after I’d identified these themes from the data did I start the design process. With the goal of a communication, jumping off piece for future studies, I went through many iterations of how to portray the ideas I extracted from the data: metric of quantification, comparisons across countries and regions, regional trends of impact and development. 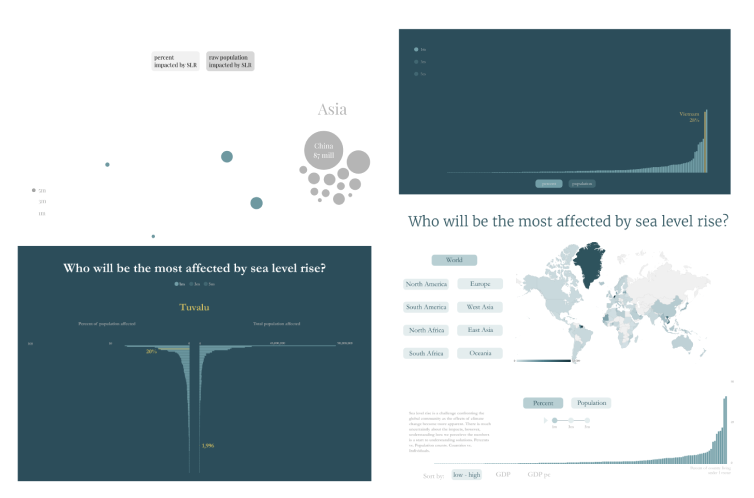 Iterations and iterations of design.

I cycled through many versions and considerations: how to show the difference between the country’s percent and raw population, how to ground this idea in geography, how to incorporate geography and regional trends by abstracting away from a traditional map, how to preserve comparisons across countries and across regions, and more.

The final design I landed on was something that (I hope):

The sea level visualization in action

This piece is still a work in progress, but it combines the research, data analysis, design, and coding that I have worked on for the past few months.

This summer has been an amazing, enlightening experience working with the Fathom team to study, create, and ponder representations about complex topics in our world.