One of the biggest hurdles beginning farmers face in the U.S. is access to land. The National Young Farmers Coalition came to us to help them build an affordability calculator that would let potential farmers understand funding and financing property of their own. They were looking for a partner that could build a tool from the ground up, one that went beyond a typical home mortgage calculator and took the complexity of farmland purchases into account.

The project is part of a grant from the USDA that is split into three phases of work – a prototype, a beta launch, and a final release. We began with many hours of research, prototyping, and user feedback, quickly becoming experts in mortgages, conservation easements, and the many ways in which farmers approach buying land. From there, we built a working prototype focused on comparing land purchase options. Common concerns from an NYFC feedback session led us to a two-pronged approach for the beta tool. Hearing the need for more educational material, we added animated case studies to complement the calculator, each one illustrating the steps a real farmer went through to purchase land. We also built a lightweight server app to power the tool, which allowed NYFC to collect the user data and feedback they needed for the USDA grant funding the work. The final platform allows users to easily build complex financing scenarios and explore the affordability of the farmland.

Everyone's land acquisition process is different. We had to look at many different variations of how farmers have been able to access land in the past – from government grants to private investors – and decide which scenarios were the most common. 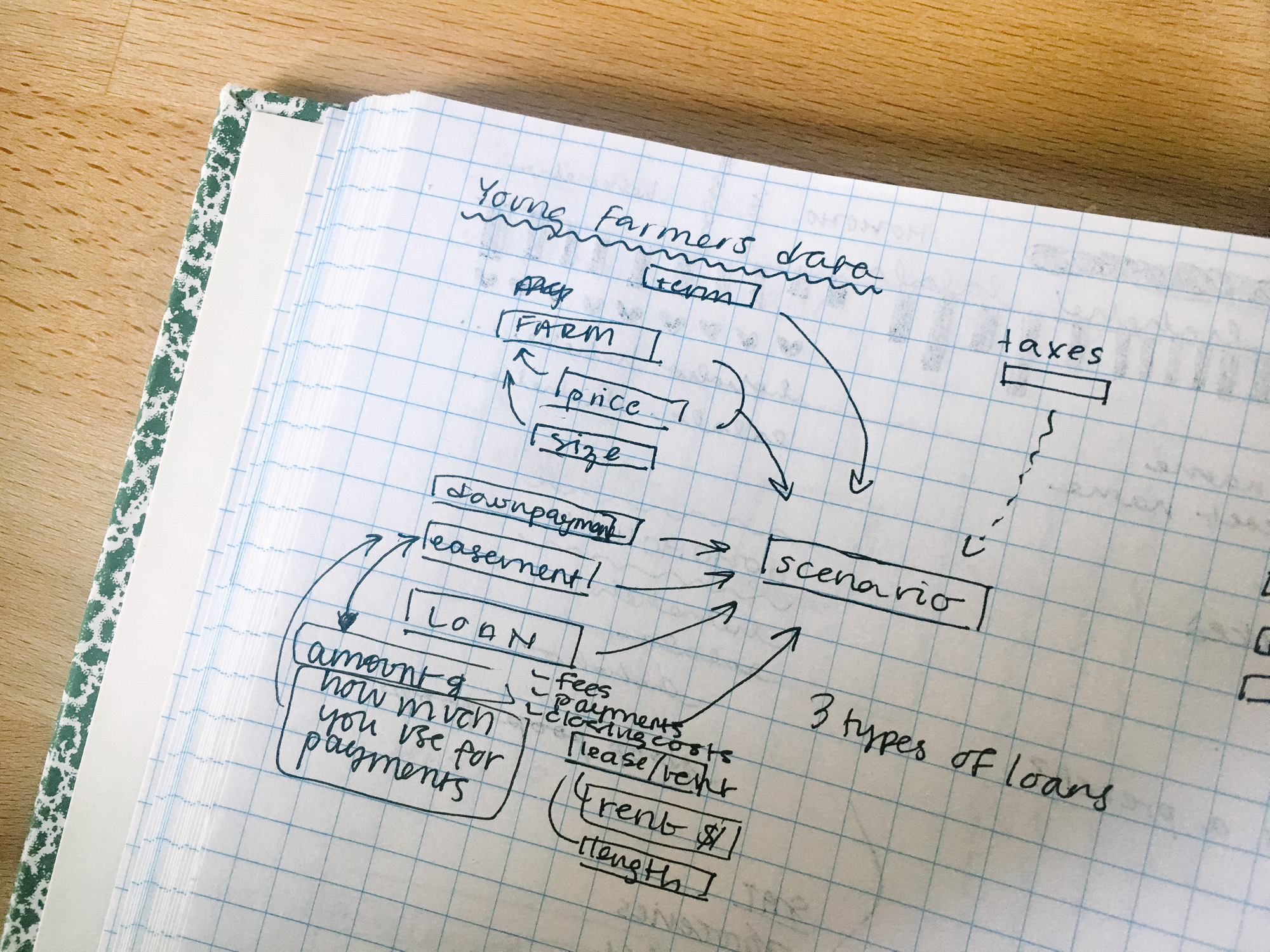 In most cases, farmers work with farm credit agencies, the Farm Service Agency (FSA), and land trusts, so we focused on those types of financial relationships.

Conservation easements are a big part of NYFC’s advocacy, so we learned a lot about the different ways in which they're used and worked on ways that they could be incorporated into the calculator.

We also examined many of the tools we knew farmers were already using. Home mortgage calculators, like Zillow’s, were popular choices, but they didn’t allow for easy comparisons, nor did they include a lot of the other variables to consider when it comes to buying land for a farm.

Since we could assume that their target audience was serious about farming, our job was not to teach financial basics or build a business plan, but instead to help them untangle the messiness of land cost calculations, and create results that they could then plug back into their own plans.

The first phase of this project was to develop a prototype that could be used to source feedback from farmers, as well as other professionals who work with farmers to plan their finances, such as farm credit lenders.

A big part of our initial design challenge was to build something that felt intuitive and friendly, but still accurate and trustworthy. The original prototype focused on a drag and drop interface, which we thought reinforced the idea of "applying" funds to different scenarios.

The prototype also contained a walkthrough to assist users with less mortgage knowledge, and a final big-picture view used to look at payments over time. We wanted to address a wide range of users in the prototype phase in order to see a) which type of user found the tool most useful, and b) if our design decisions were addressing their needs. For example, were users less familiar with mortgages able to use the tool and learn something from it? And for users who were further along in in their planning, were they able to compare scenarios in a meaningful way? Was it an obvious and significant improvement over using a custom spreadsheet? 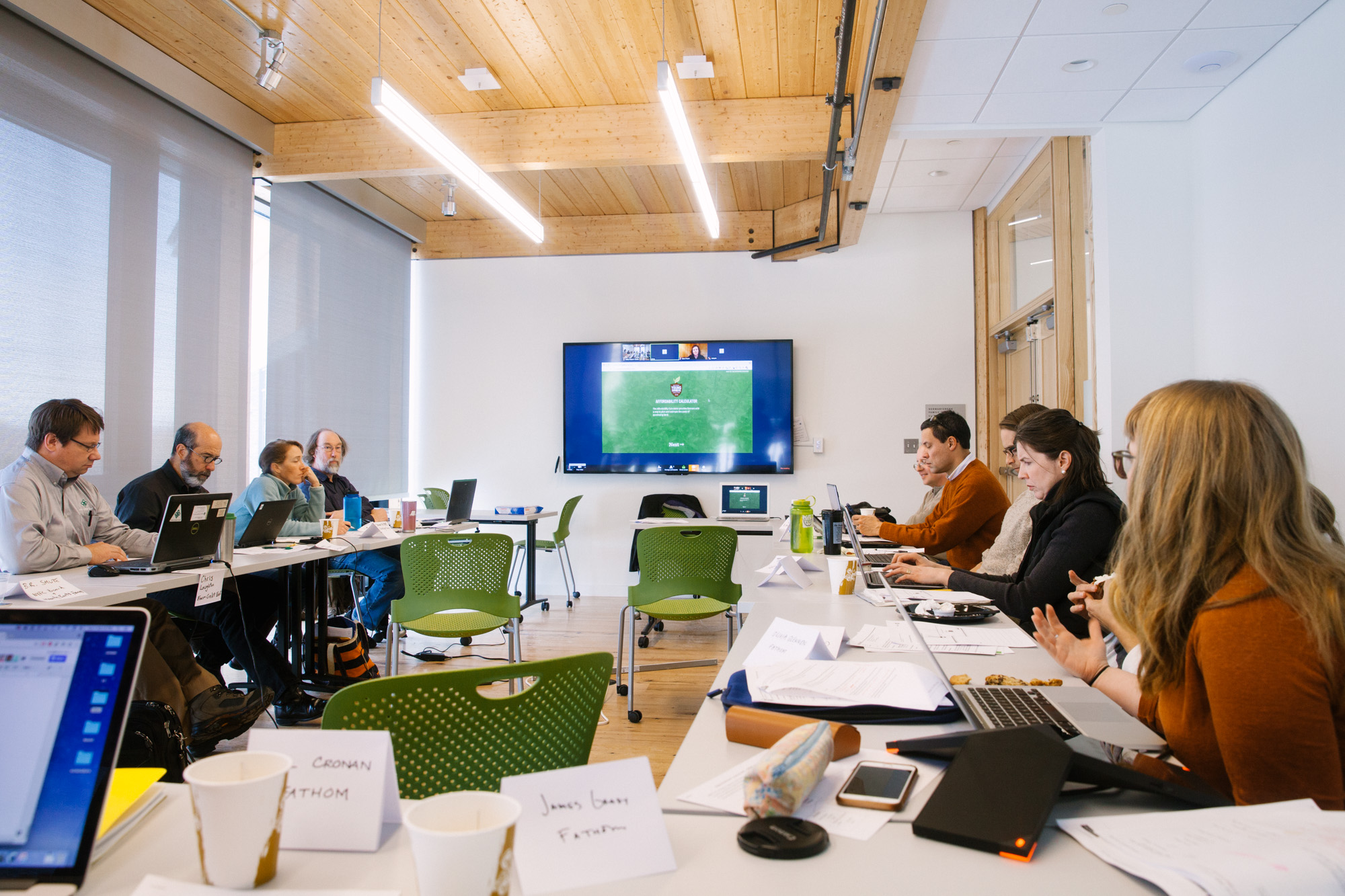 A few months after releasing the prototype, we met with several farmers working with NYFC and farm service providers to review their use of the tool. The key takeaways were that the tool needed to be 1) more focused on comparing the affordability of different options, 2) help users understand their possible options, and 3) better indicate where they have to conduct more of their own research.

In reviewing the feedback, we felt that the calculator alone wasn't enough to help users understand their options. We suggested balancing the quantitative tool with more qualitative “case studies” that walked through the land access stories of real farmers.

Based on the prototype feedback, we needed to consider a few things:

The original prototype separated the walkthrough, scenario building, and comparisons into three separate views. The redesign of the calculator showed all three on one screen, allowing users to more easily create scenarios and compare them. We also moved away from the drag and drop interface after seeing how users responded to it. In most cases, people were looking for a faster way of building so they could focus on the comparison. To address this, we reduced the number of “building block” options and switched to buttons to add or remove blocks.

In the original design, we did our best to hide any inactive numbers. However, users felt this was hiding too much. In the redesign, we kept all the numbers present, so the user can easily make changes. We also made sure that the tool would quickly and continuously provide useful information with minimal user input. Often this is best handled by providing “default” numbers that users can change, which means that the interface is never in an “incomplete” state. But that wouldn't work, because part of the tool’s purpose is to help inform users where they need to do more financial planning and research. However, many users may only have a vague idea of what their expenses like insurance or taxes may be. Instead, we made sure that you could get a rough picture with very few numbers.

We carefully considered the interface of both what users enter and how to best depict the results. For example, the monthly payment visualization focuses on showing the breakdown of a monthly payment and how those proportions might change over time. The view also mirrors the tendency for people to budget on a monthly basis. The total costs view enables long-term planning, letting a user compare the overall cost of two scenarios – in particular, interest over time.

For the new case studies section, we looked at how to take complex scenarios and distill them into easy-to-understand steps. In listening to Tim’s story, we realized that a lot of time would pass between each stage of the process. We felt it was important to add a timeline to help beginning farmers understand that land acquisition can be a lengthy process, and to keep that in mind with their own planning.

Throughout the piece, we highlighted which groups Tim was working with at each step, helping introduce users to options they may not have been aware of.

For the USDA grant, NYFC needed to collect user feedback during the Beta testing phase. To do this, we built a lightweight custom server app to support user accounts and store the feedback.

For the final release, we worked with NYFC to incorporate additional financing options and detailed affordability breakdowns. Farmers can calculate affordability using numbers from their balance sheets, track the property's equity over time, and compare the cost of leasing versus buying the land. When finished, farmers can download a detailed PDF overview of their scenarios to reference in business planning and meeting with loan officers.

Working with NYFC, we were able to take lots of disparate research and materials, incorporate user feedback, and package it all into a clean and accessible tool that directly serves their audience. The final tool is more than just a calculator: it's an online resource that provides a solid foundation for NYFC's work in promoting land accessibility.