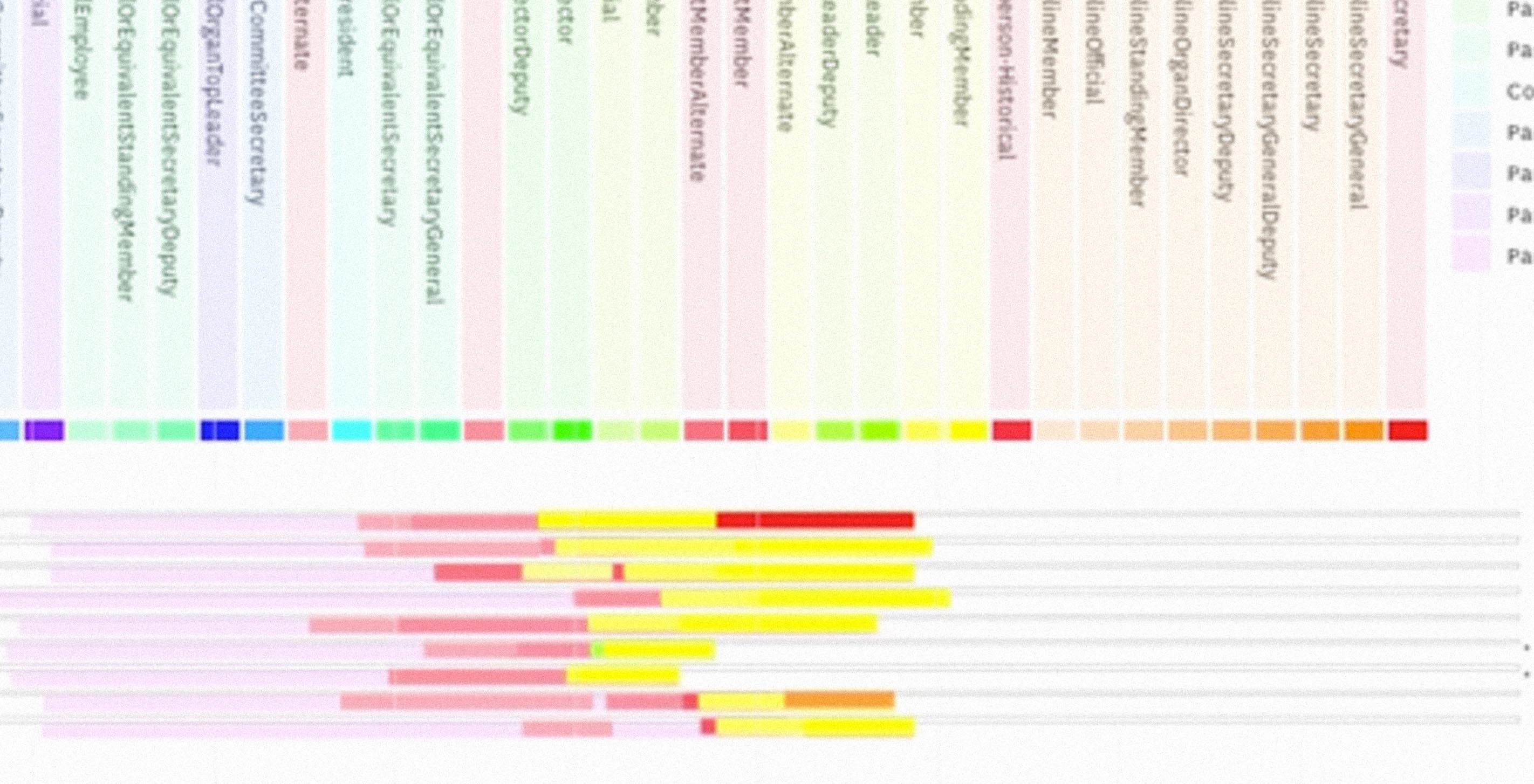 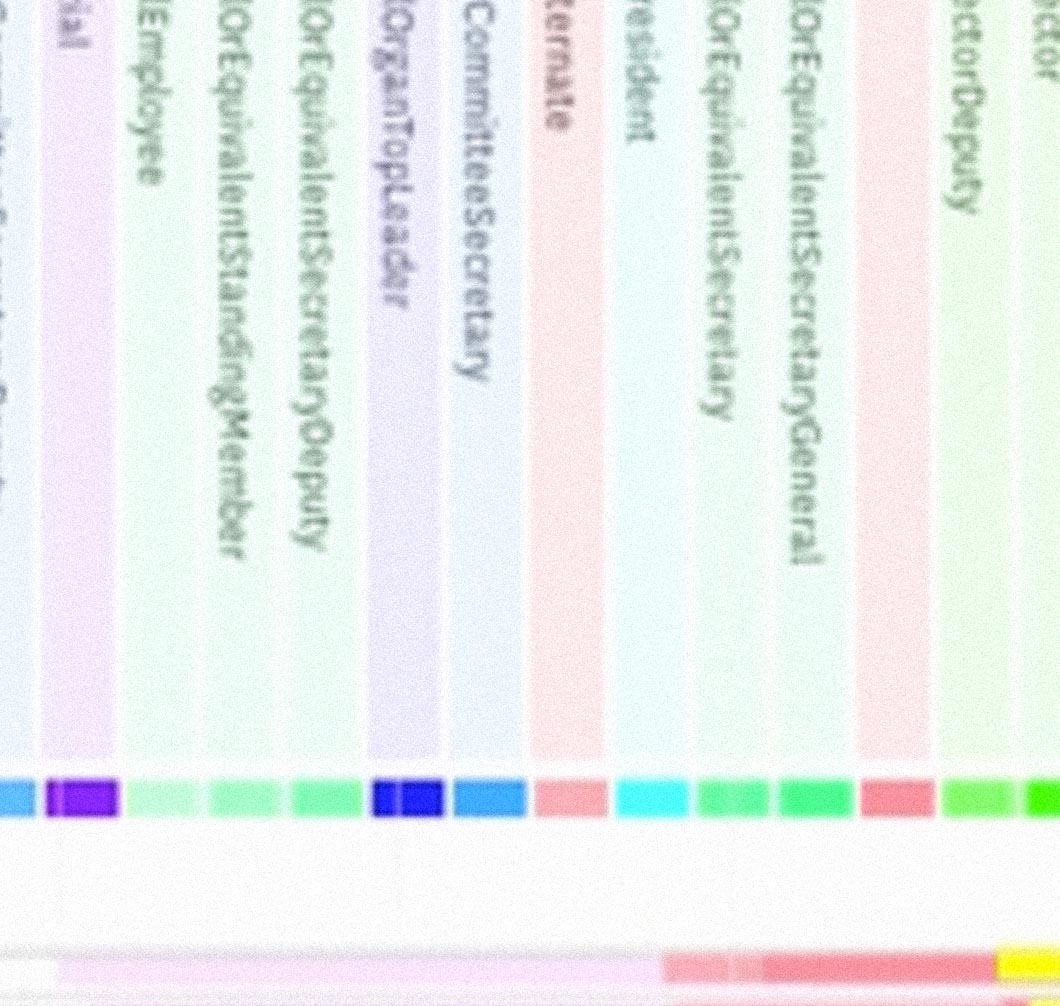 k
n
t
Mark
Rising stars and many hats
This post continues from “Of guanxi, kingmakers, and princelings,” describing how we approach projects and let the data inform the presentation. You may want to read that one first.

From the outset of the Connected China project, initial discussions with Irene Jay Liu of Thomson Reuters told us that the career trajectories of Chinese officials would play a major role in the application.

In the custom database maintained by Irene's team, a job is tracked as a relationship between a person and an organization. Memberships, academic affiliations, and person-to-person connections are stored in the same way. To better understand these connections, we built a quick tool to explore them along a timeline: 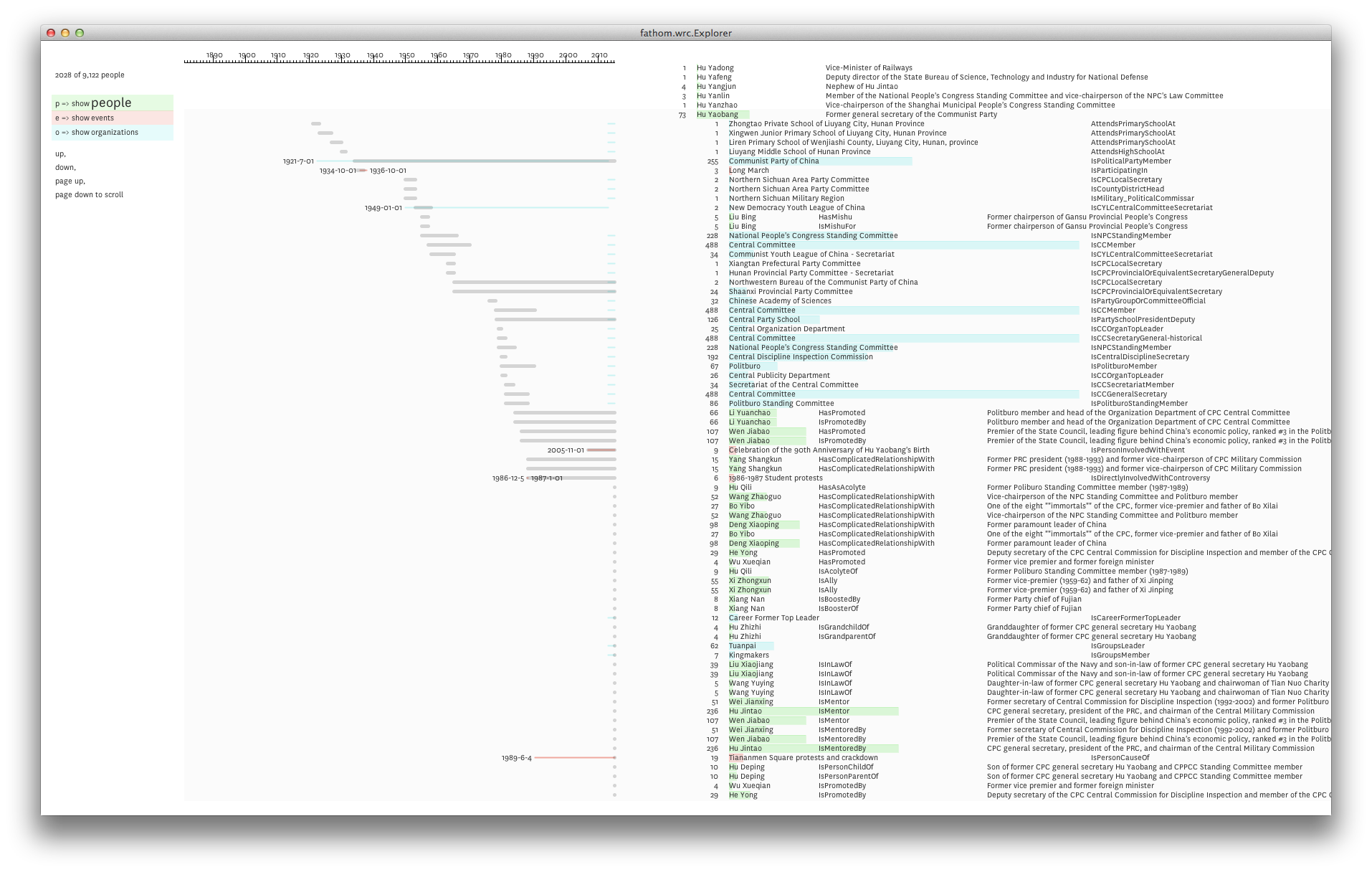 In the data compiled by Reuters journalists, every type of connection between people, organizations, and events is assigned a specific relationship type. Particularly interesting is the time span attached to each link.

The database allowed the journalists to track the duration of every relationship, but durations were most readily available and reliable for official positions. As a result, we focused on the rise and fall of political careers. And what better careers to explore than those at the very top, the members of the Politburo Standing Committee?

Officially known as the "Standing Committee of the Political Bureau of the Communist Party of China Central Committee," the Politburo Standing Committee (or "PBSC") is China's most powerful organization. Their decisions trickle down through all levels of the Party and through the government and military. Our next step was to isolate the positions held by the PBSC's nine members (in November, this number was decreased to seven). You can see the members listed across the top of the screen capture below, and underneath them you can see Li Keqiang's full career history as it appeared in the database at that time. Each of the rows with a red, orange, or yellow square mark a position he has held, and each black bar is a rough timeline showing the duration of the post. 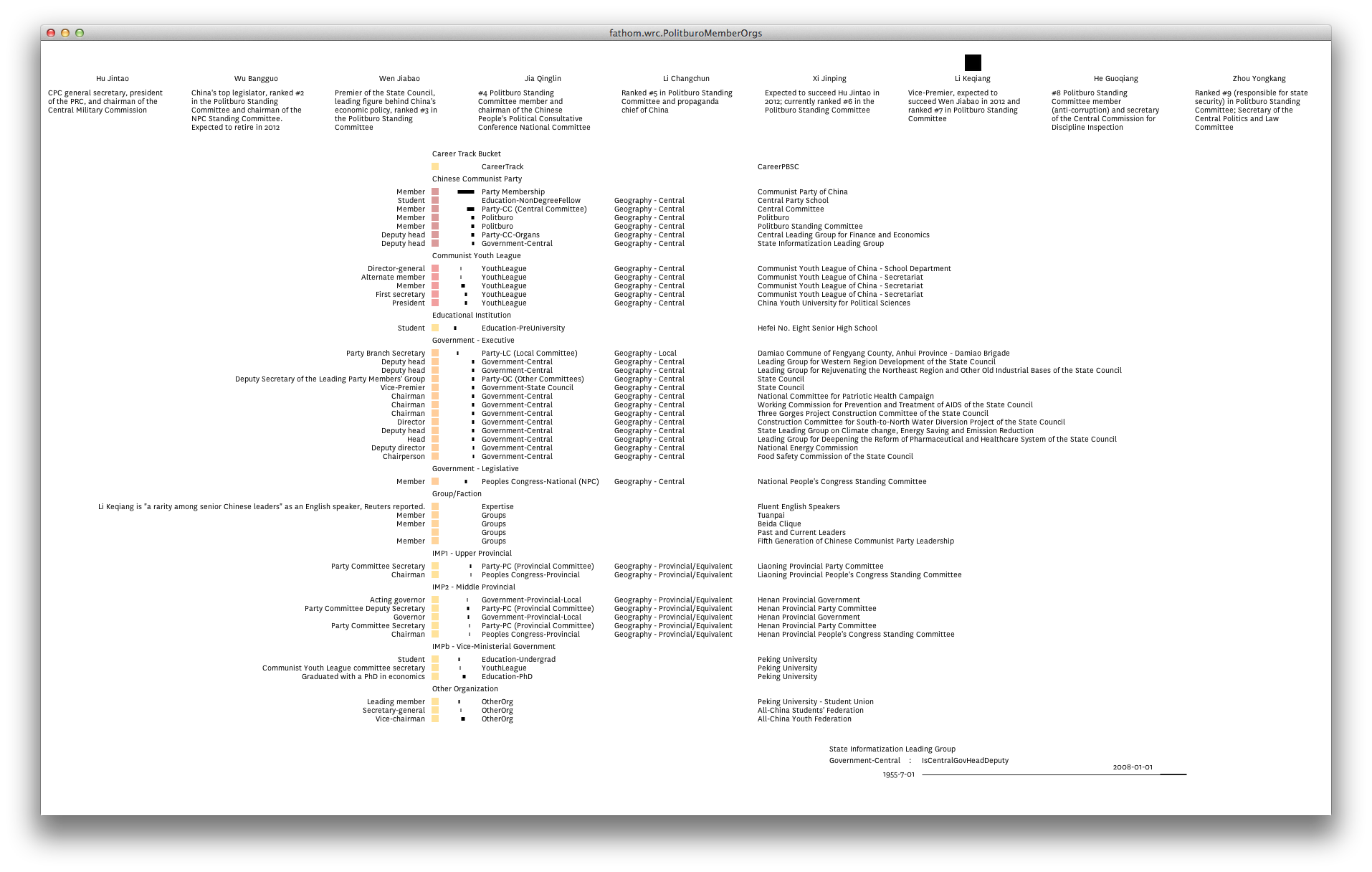 In the summer of 2012, China's top ruling body still had nine members. Each of them held multiple positions in the government and, more importantly, in the Communist Party.

One immediate observation we made was that a politician can wear many different hats at the same time. In the snapshot above, almost all of Li Keqiang's positions within the Chinese Communist Party and the executive branch of the government are being held concurrently.  As officials climb the ladder, they usually take on parallel positions in the Party and in the government, and they frequently hold several offices in addition to their primary role. We would come back to those simultaneous positions later in the process. Before that, we had to find the means of showing career advancement.

How detailed could we be about career advancement? Even jobs that aren't necessarily superior on paper represent an advance in status and experience. While the journalists researched official sources for ranking civil service positions, we built a quick tool to put the various jobs in a fixed order. We then plotted the careers of the members of the PBSC, first indicating the type of positions they held in a grid and then expanding those positions into a timeline. We also wanted to acknowledge the impact that age has on careers—the Party and the government enforce retirement ages, so politicians who get a late start might never achieve top leadership. So we added the option to align the timeline by age, which you can see in the video below around the :08 mark.  We collapsed the jobs to show only the most important ones during their careers.

Many of these ideas made it into the final Connected China app, but plotting each position as an incremental rise or fall in career importance did not. Because not all positions are easily mapped onto ranks, too many of the steps involved an “unknown” change in status, which made comparisons difficult. Sometimes, it can be hard to say goodbye to an idea, but we knew comparing careers would need to be straightforward for an audience not concerned with the nuances of roles and rank.

Some positions within the civil service are assigned ranks or administrative levels. Unlike in the United States, where a presidential candidate can be a U.S. senator, a state governor, a business leader—or even an actor—political advancement in the Chinese system tends to follow a prescribed pattern. Officials start off with local positions, then advance to the provinces, and then step onto the national stage before they can rise to the Politburo Standing Committee. Most serve in a deputy role at both the provincial and national levels, but some, like the President Xi Jinping and Premier Li Keqiang, rise quickly enough to skip those deputy roles.

In order to plot a politician's rise, we needed to map each of their roles to its correct administrative level, and then collapse all of their simultaneous roles beneath the most important position. Since the reporting team was still in the process of researching and entering positions in the database, it was time for another iteration to make sure we were showing career growth accurately. In this one, we showed both a full career history on the right, and a timeline of corresponding administrative levels on the left: 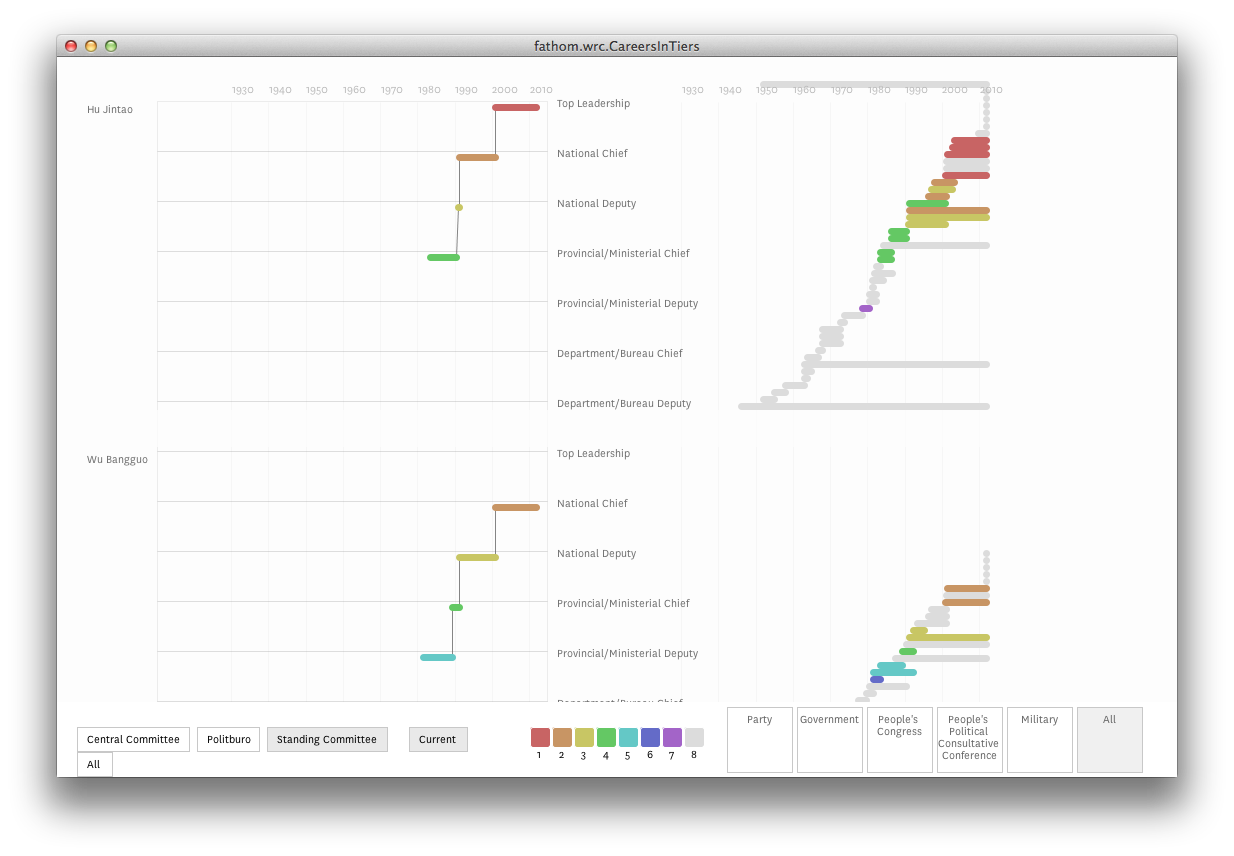 In the Chinese civil service, ranks are assigned to many of the positions. Career trajectories proceed along these ranks in consistent ways.

Once we had the fundamentals worked out, we set aside our internal tools and started work on what would become the final application. We determined that the full list of roles and the steps in a career told necessary—but fundamentally different—stories, so we handled them in two different ways. In the Career Comparison view, the ability to compare multiple careers far outweighs the need to see the specifics of a political post. Initial testing showed this career comparison to be an important window into understanding the subject at hand, and as a result, it became one of just five top-level sections in the final application. 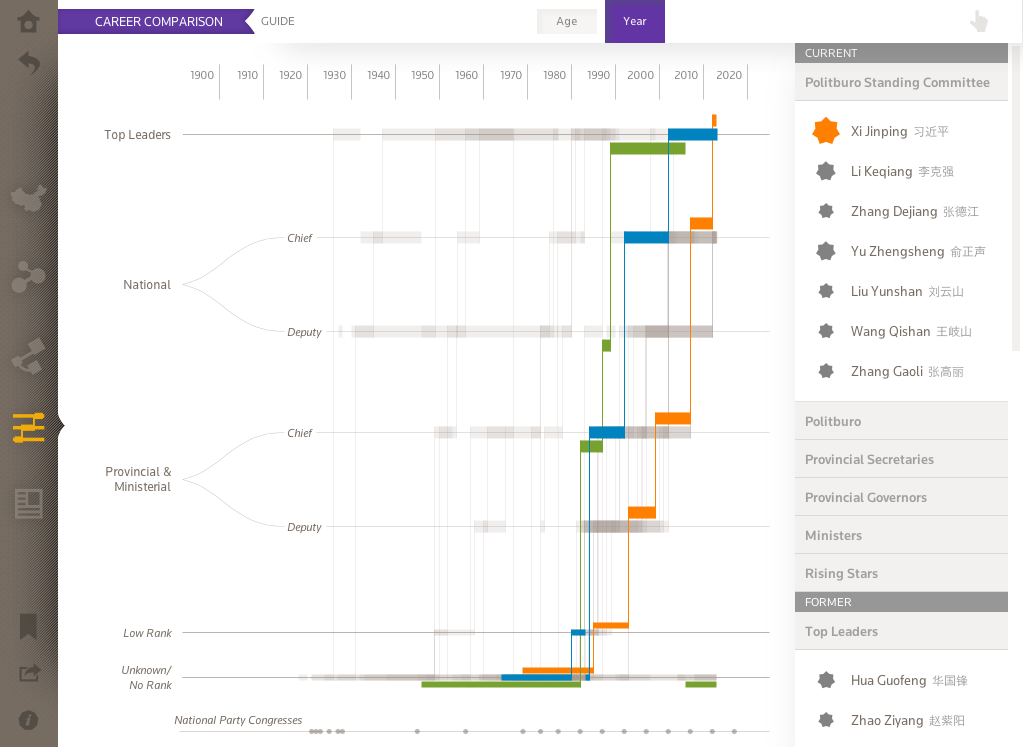 Three generations of Chinese presidents in the Career Comparison view of Connected China. Retired Jiang Zemin is in green, Hu Jintao is blue, and new President Xi Jinping is in gold. Each path features a steep rise and jumps over one or more administrative levels.

On the other hand, the full career history is used to round out an individual's profile, where it's more appropriate to show the additional detail of their career. 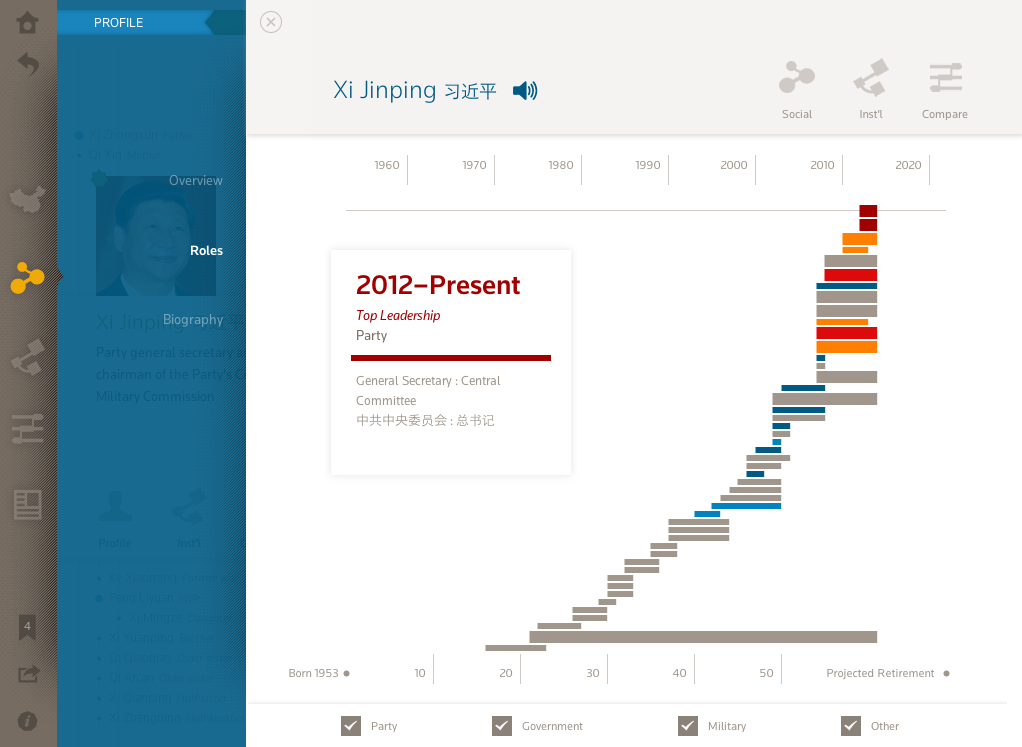 Xi Jinping's career history, as shown in his profile page in Connected China. Wide bars denote positions he holds currently, and color denotes the rank. Here, his most important role (leader of the Chinese Communist Party) is highlighted.

By toggling the different checkboxes at the bottom, you can highlight an individual's positions within the Party, government, military, and roles from other categories. Swiping (on a tablet) or dragging the mouse (on a desktop computer) across each position will show details such as rank and the official name of the post. The wider bars indicate currently held positions—emphasizing the tendency for top officials to hold many positions at the same time.

These simultaneous offices are one mechanism by which the Party, the government, and the military act in concert. In the Institutional Power view, we provide a map of the these pillars of power, and in step two of the introductory guide we highlight the positions held by the members of the Politburo Standing Committee. As you tap or move your mouse over each member, all of their current positions are highlighted in red. Below, you can see the positions currently held by Xi Jinping, head of the Communist Party and incoming president. You can see he is at the very top of the party and the military, and currently serving as vice president within the government. 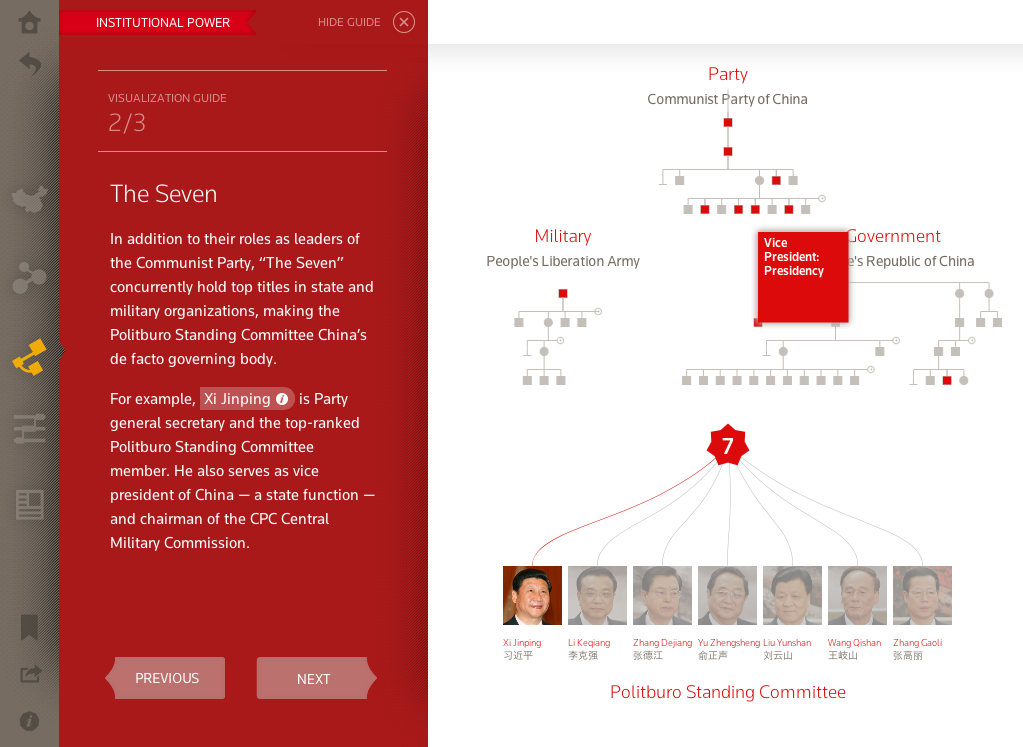 Chinese officials often serve simultaneously in the Party, government, and military. In the Institutional Power view, we show the top tiers of all three pillars and the roles held by members of the Politburo Standing Committee. Here, all the positions currently held by Xi Jinping are highlighted in red.

The ongoing efforts of the Reuters journalists continued to uncover more details about political posts and connections during our development process.  And by using that data to inform the tools we built as part of the process, we were able to weave useful information about political careers throughout the application.