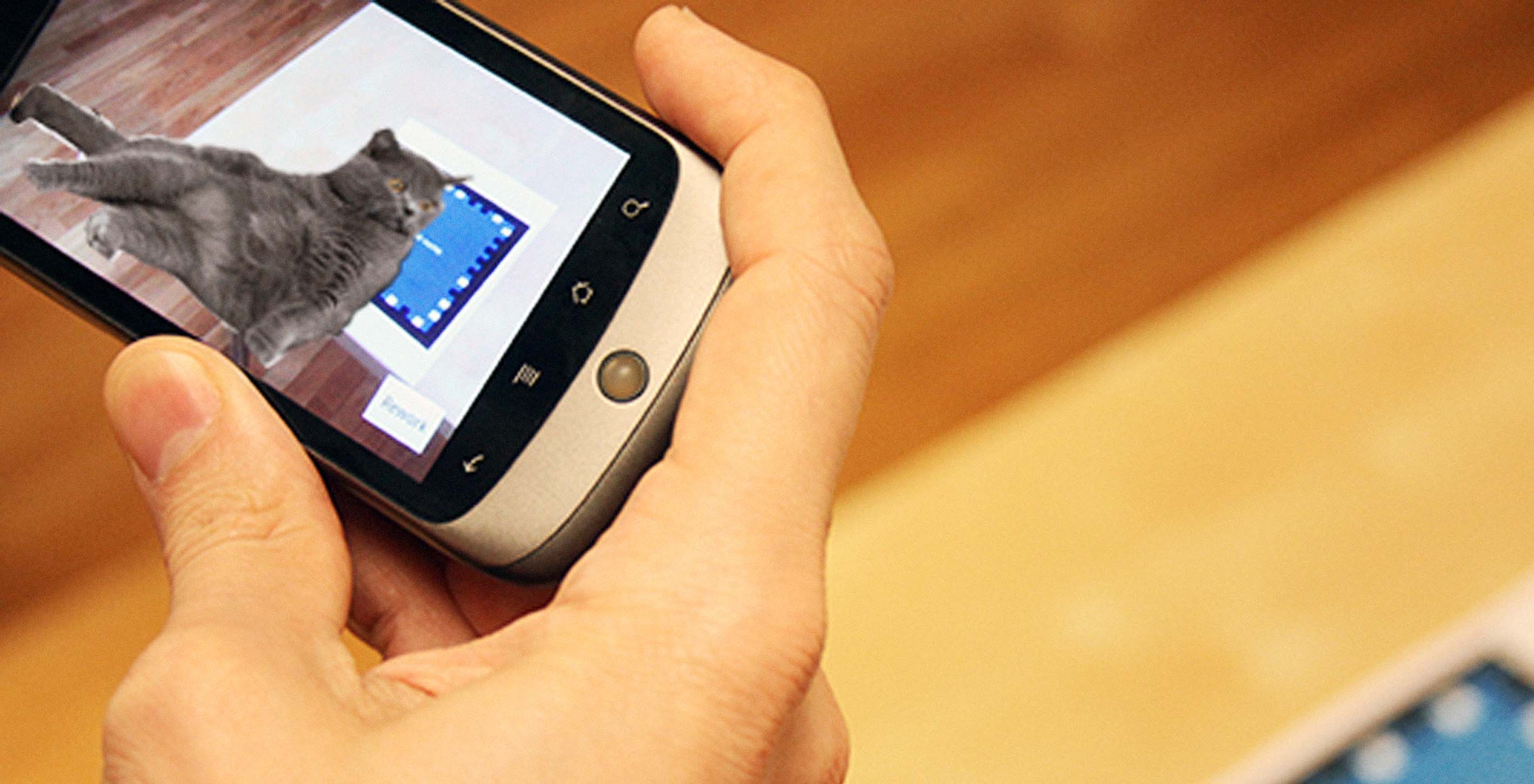 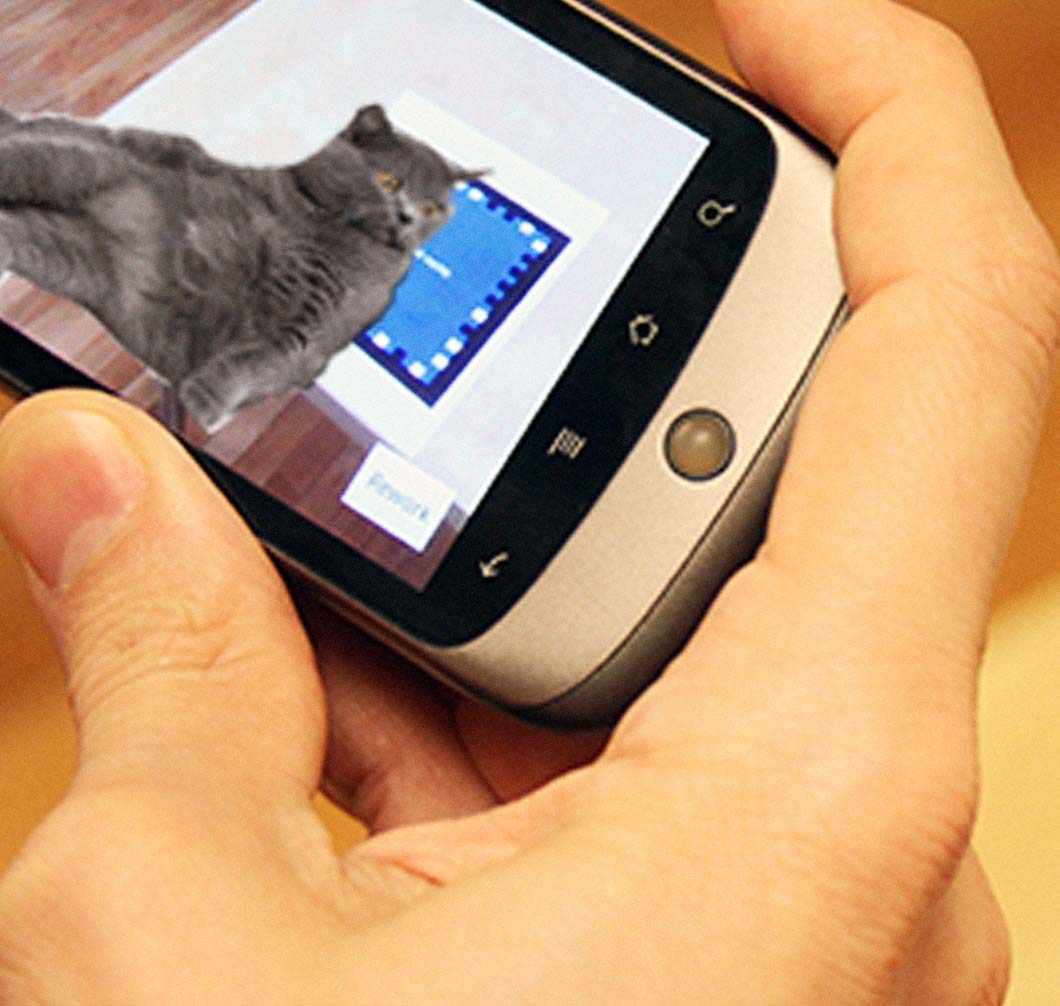 k
n
t
Andrés and Terrence go to a hackathon

The Relay app emerged as a project from an MIT hackathon, and soon after became a fully working prototype. 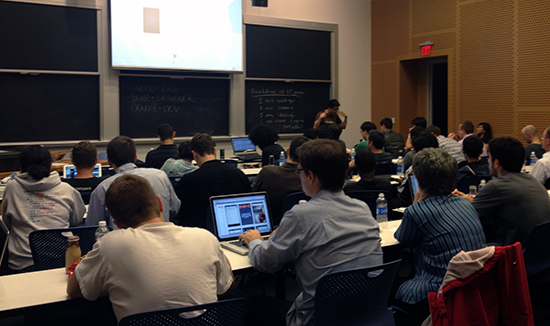 Why did you guys go to the AT&T Mobile Hackathon at MIT?

Terrence: Company policy. Just kidding, we went of our own free will. Neither of us had been to a hackathon before so we thought, why not? I wanted to check out the talent at MIT and test drive the future.

Andrés: I hadn't been to a hackathon before, and was curious about the experience. I also thought it could be a good chance to test the latest beta version of Processing 2.0. 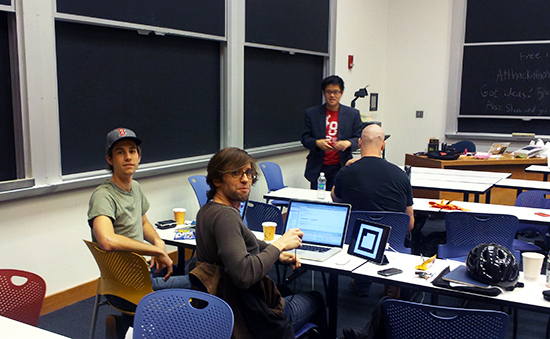 Was it what you expected?

T: I'd never been to MIT or a hackathon. Opening night there was a lot of positive energy when teachers, students, researchers and designers pitched their ideas to recruit teams.

A: In general, I'd say yes: people coding hectically to try to get their ideas ready in 24 hours, and large amounts of snacks and caffeinated beverages, which I heard is common thing at hackatons. I'd leave the unexpected part for a later question. 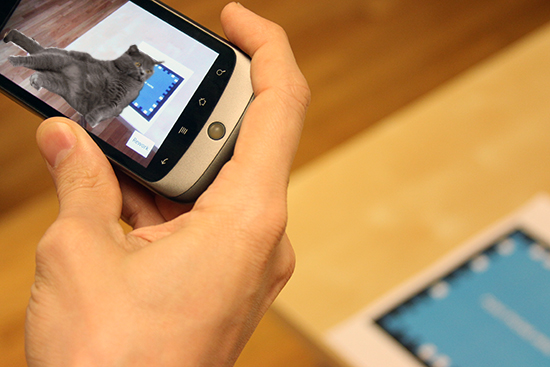 So tell us the ideas behind your project?

We began by exploring the theme of social interaction in physical space using mobile technology. Our idea then branched into the subject of art in public space, an issue that has been around since the days of cave painting. How do we collectively decide what to exhibit in our public spaces?

The app we began developing, called Relay, uses augmented reality (AR) to project poetry, advocacy, and art into public spaces. Anyone with the app can write their own messages, and each message lives in a specific location. Each location is marked with a poster. The goal is that someone sees the poster, downloads the app, and views the conversation. Then add add your own text! We hope this conversation helps us gain insight on whether qualities like humor, aesthetics, metaphors, pop references, or even profanity are held at different levels of importance. Maybe encouraging the development of a reality where contributing our ideas is accessible and where public space is seen as gallery space. More importantly is that we actually utilize these galleries, and find ways to communicate despite conflicting views, with the aid of technology. 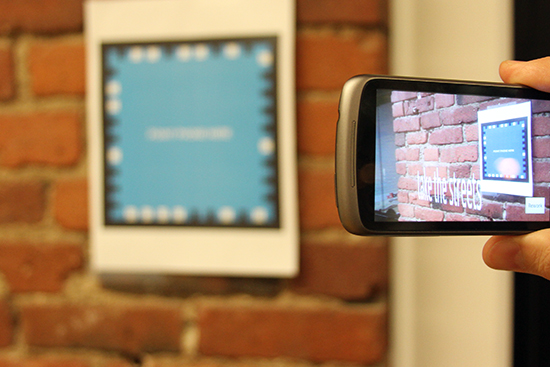 I heard you guys got first place. What will you buy with your gift card winnings?

T: A pumpkin carving kit, the Half Life of Facts by Sam Arbesman.

A: Getting first place was unexpected. Still not sure what I will buy with the gift card, maybe a couple of books or some electronics.

Do you think you would go to another hackathon?

T: Are you kidding me, we are going on tour next summer!

A: Probably, but first we need to finish this project.

Andrés and Terrence were interviewed by Terrence.

At the end of the hackaton we managed to run a very simple demonstration of the idea, so during the last couple of weeks we were busy implementing a fully working prototype. This prototype includes the data back-end that allows users to save and retrieve messages at each location. We used the vuforia SDK to handle the computer vision part and parse.com for the data back-end. The video at the beginning of this post shows the prototype in operation.