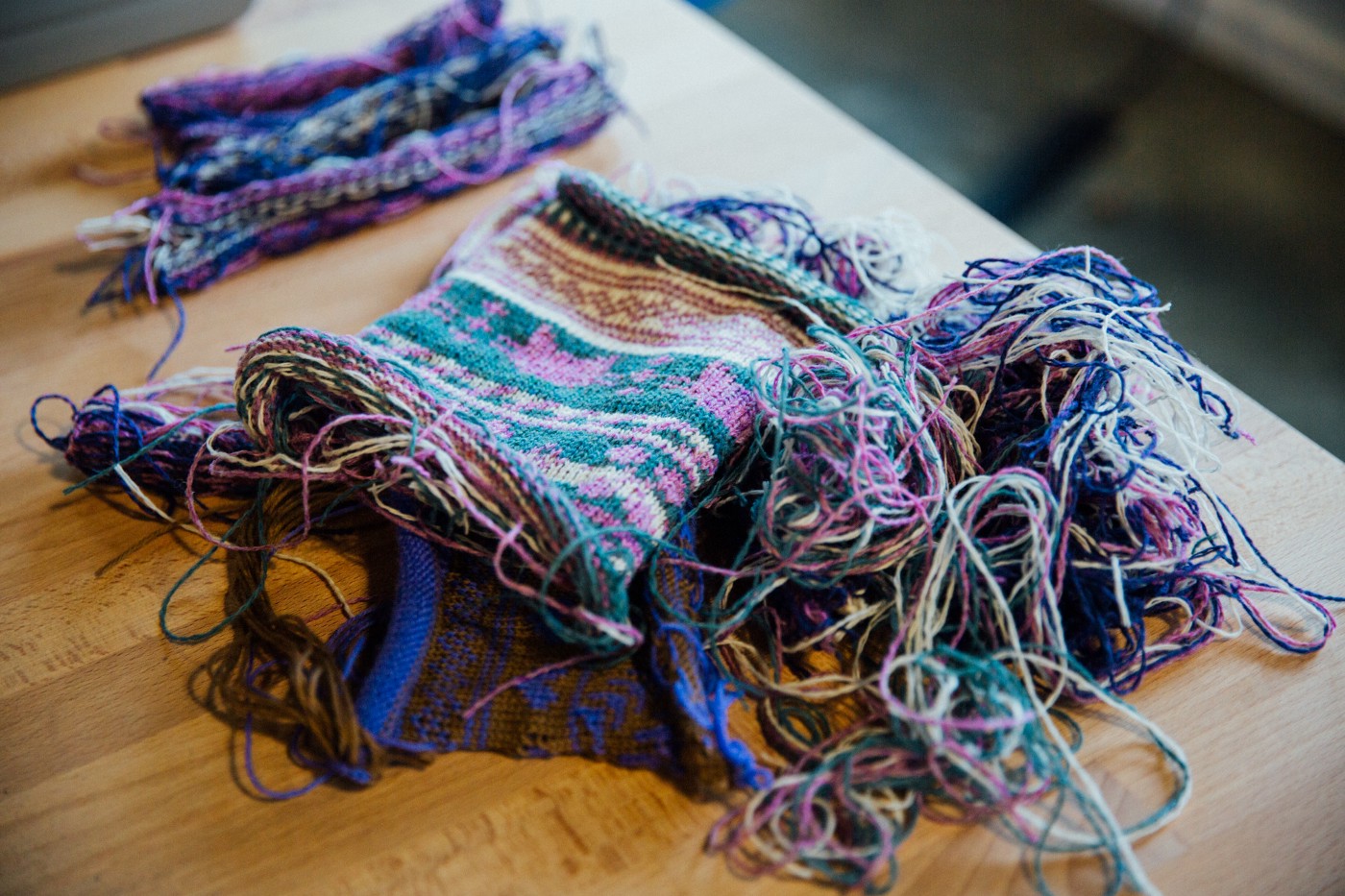 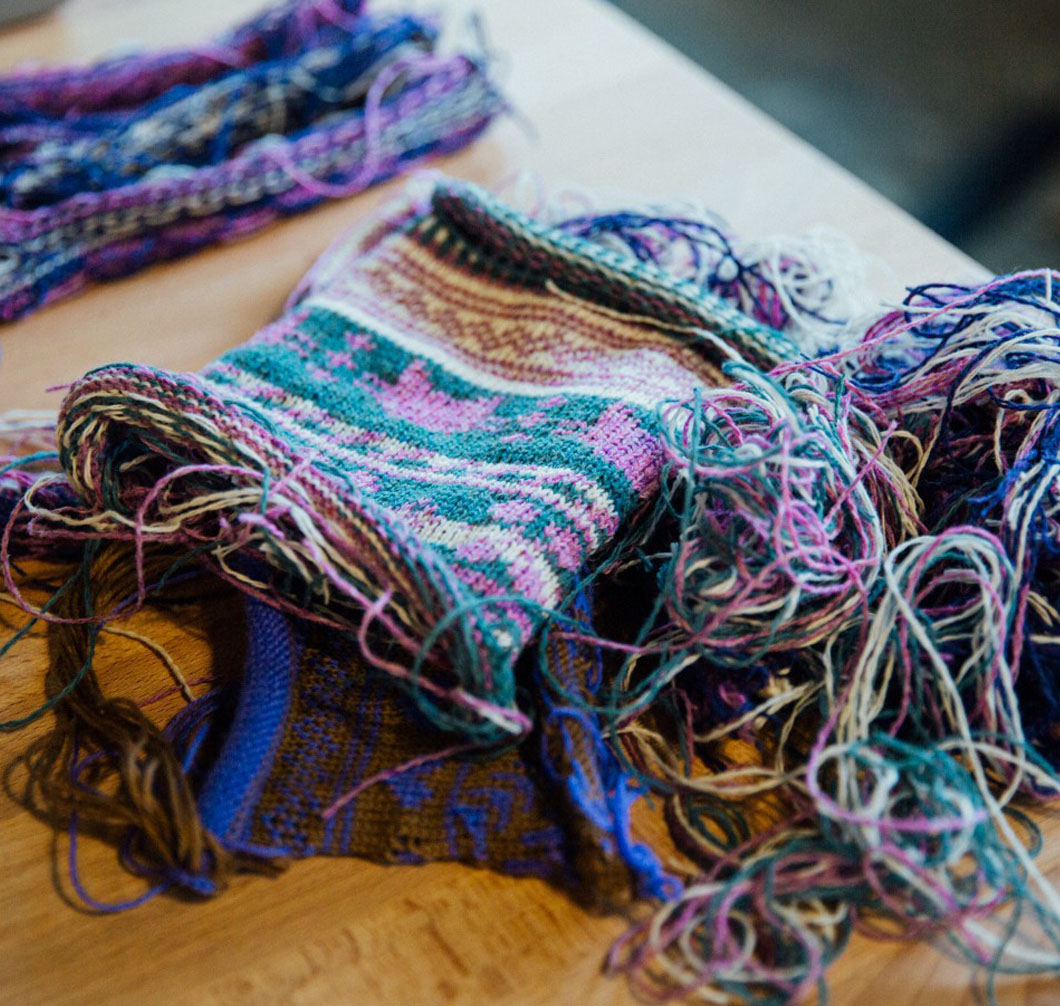 k
n
t
Knitting Our Holiday Cards
Earlier this year Fathom acquired a Brother KH910 knitting machine. We’d been trying to learn more about it with the hope that we would eventually be able to hack it to quickly read complex, generative patterns, but we needed a project to jumpstart the process. When it came time to decide on a theme for our annual holiday card, we saw our opportunity. Although I had not actually used the machine yet at the time, I suggested we make a Fathom Holiday Sampler, knitting a unique, computer-generated, multi-colored square for each of the nine members of our office.

I began researching traditional Fair Isle and Nordic knitting and sketching out motifs inspired by these patterns. Meanwhile, Anisha got to work hooking our knitting machine up to an Arduino to connect it to a computer, on which Olivia was setting up AYAB, a software program that allows users to control the knitting machine directly from their computer. Without the extra hardware and software, the knitting machine can only do patterned knitting by reading from patterns that are physically printed or drawn onto mylar sheets. With the new setup, the machine can knit directly from a pattern loaded onto a computer or tablet. Each pixel in the pattern relates to a single needle on the machine, so an image that’s 100 pixels wide generates a knit piece that’s 100 stitches wide. 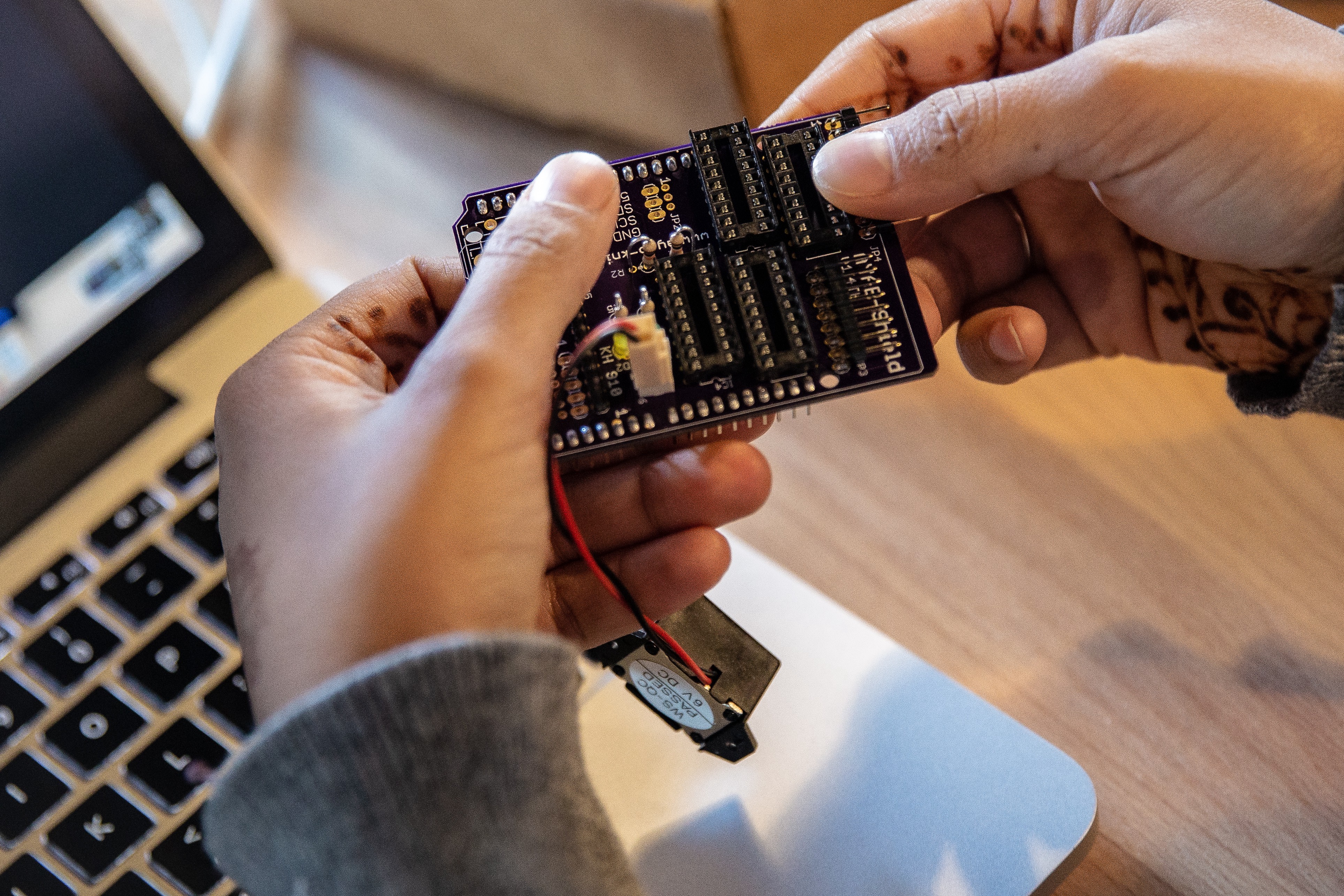 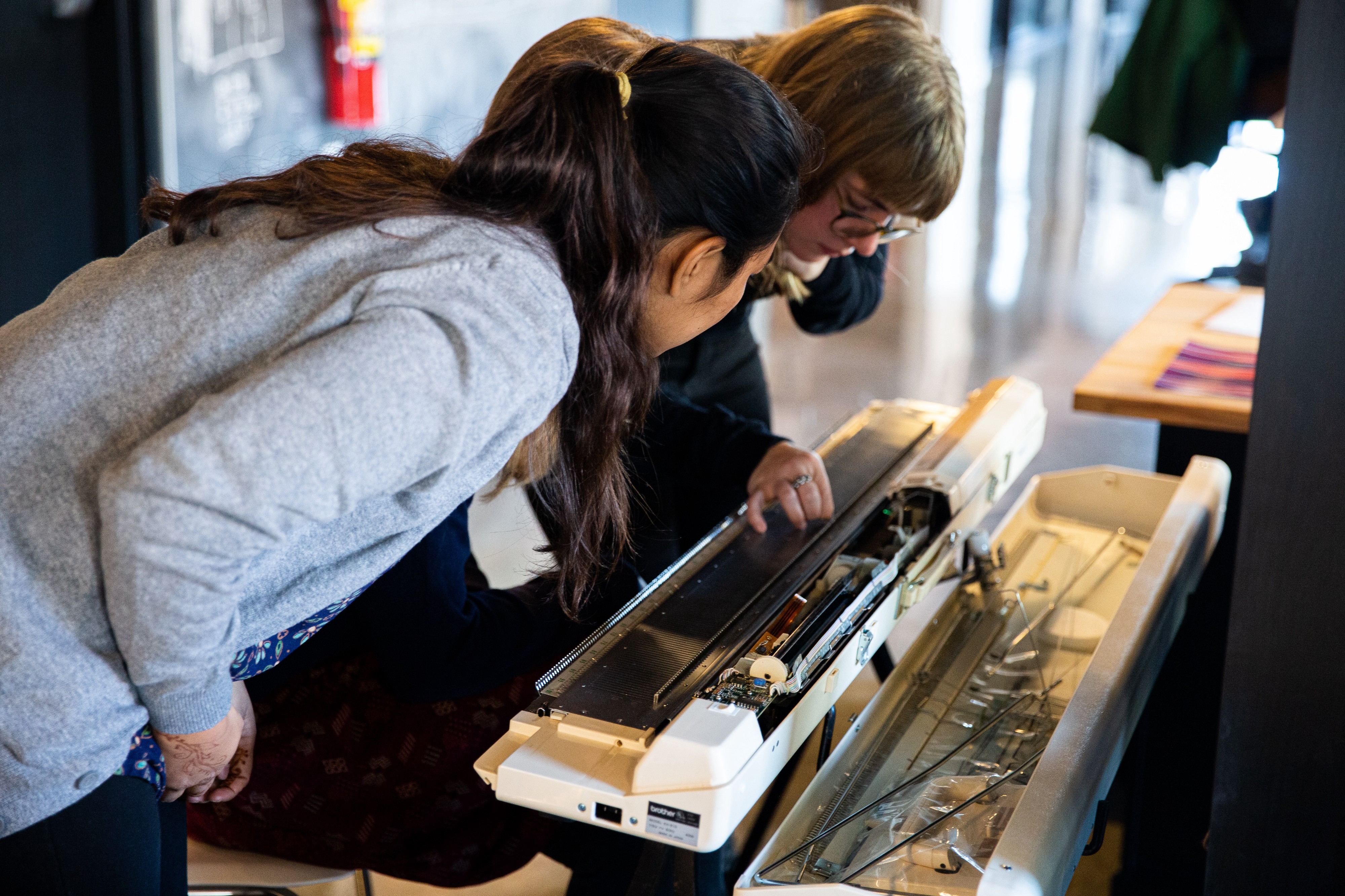 The next thing we needed was yarn, so we started mocking up how the squares might look together in different colors using my test patterns. We had used Harrisville Designs’ Shetland wool with the machine before, and matched some RGB colors to their yarn samples to test different combinations. As we would with any generative project (despite the unconventional medium) we iterated through a number of combinations with each option before landing on the best solution.

For example, we liked that two-color squares were easy to differentiate, but overall felt the composition was too flat. 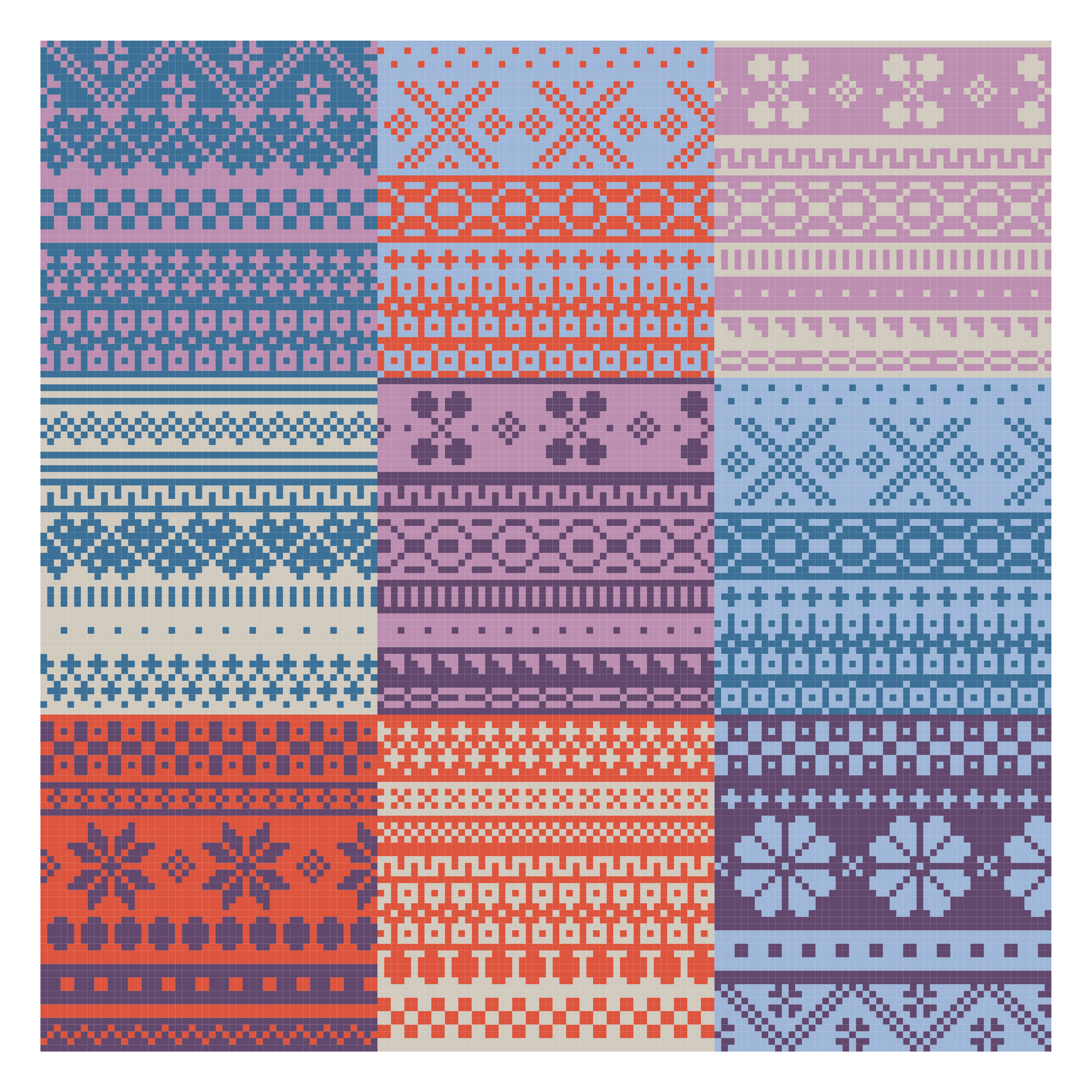 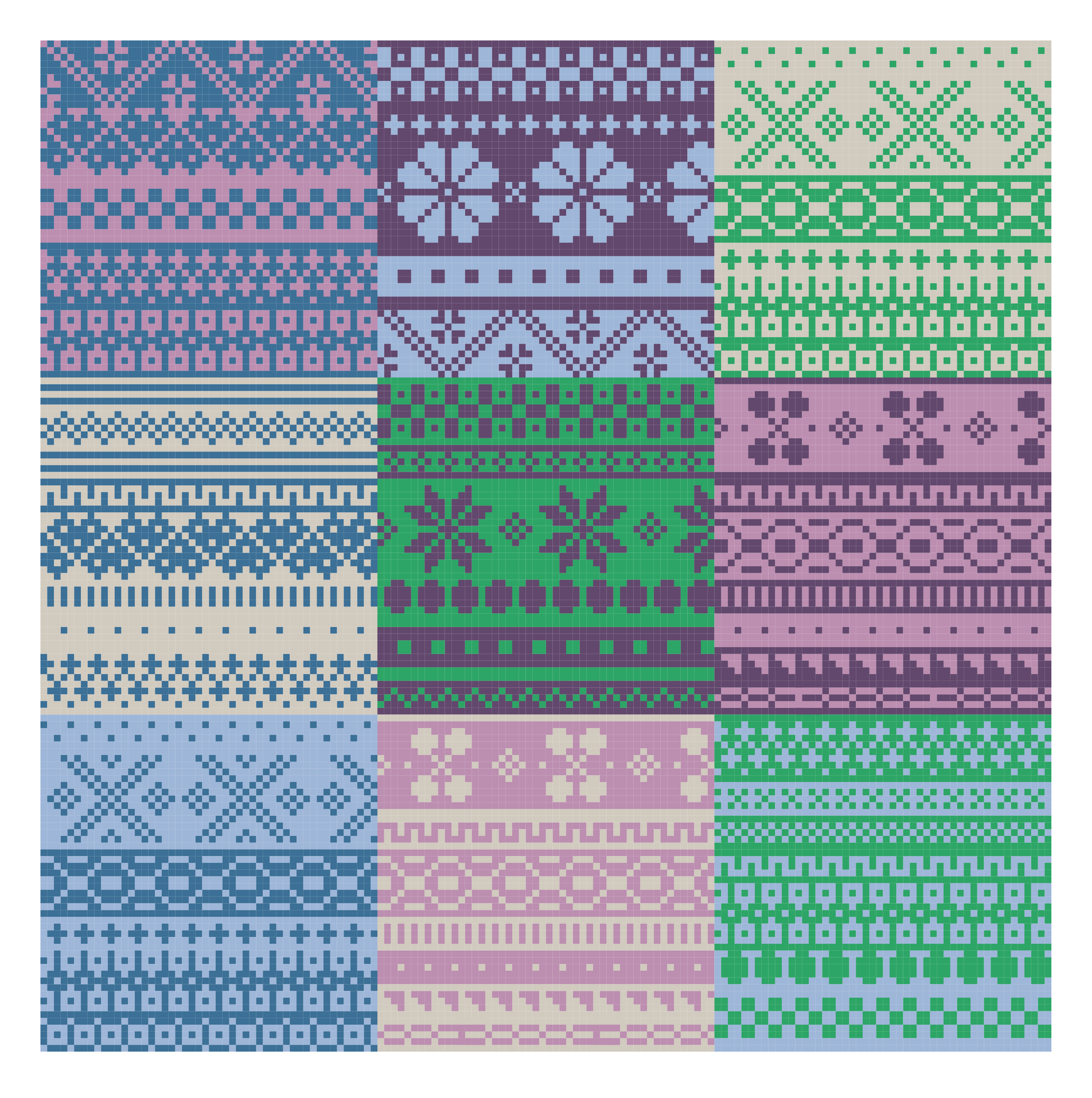 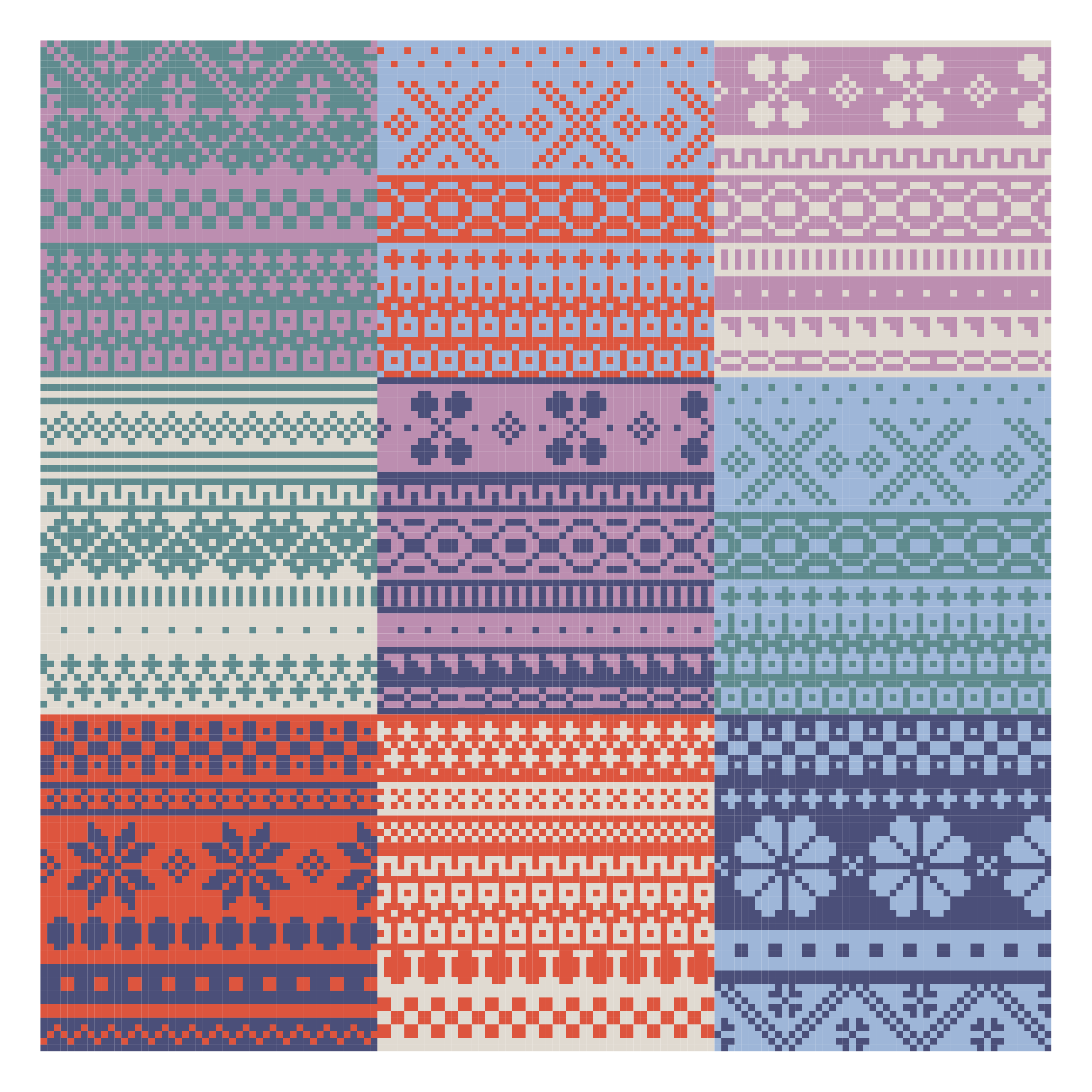 We liked the richness of the three-color squares, but felt the squares were too indistinguishable. 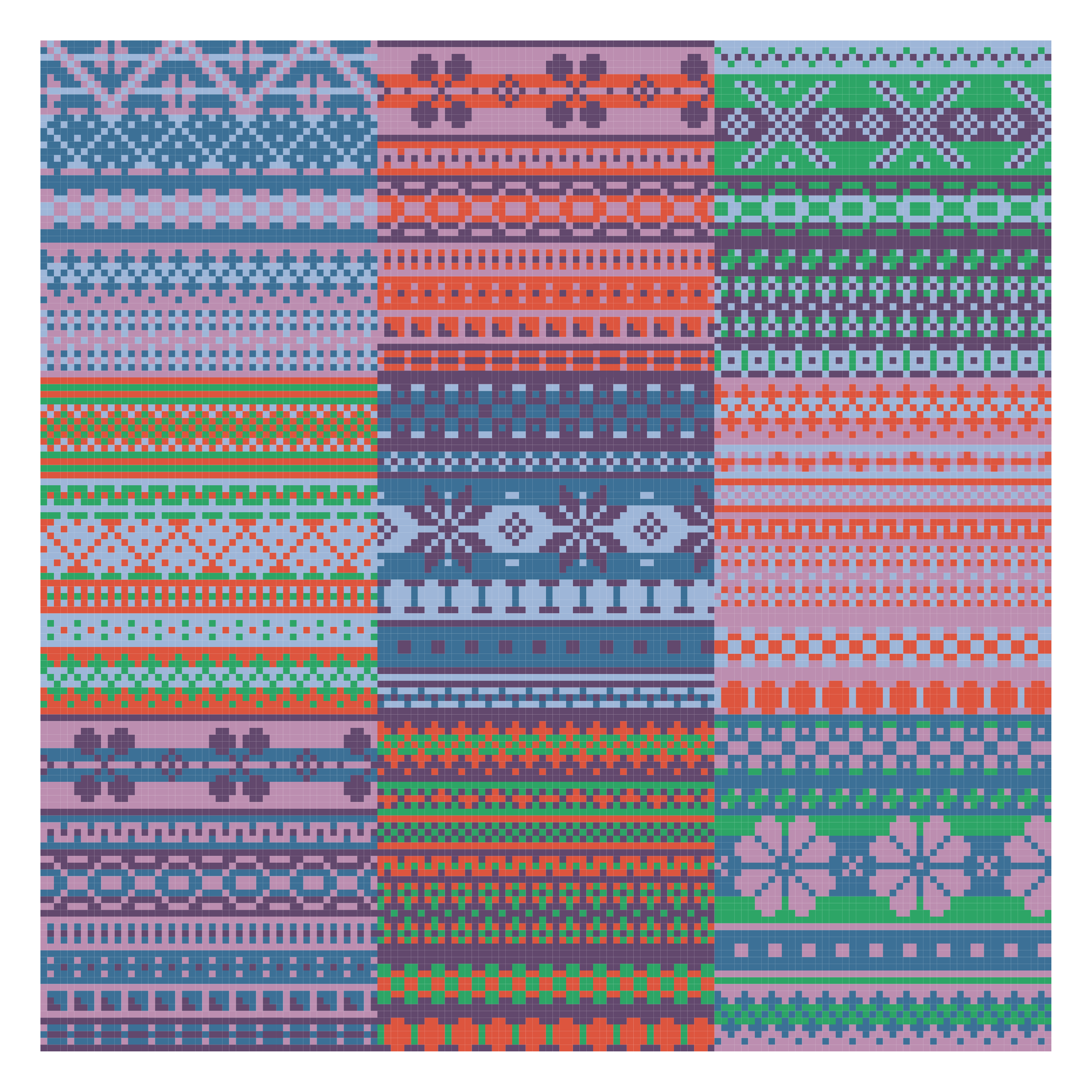 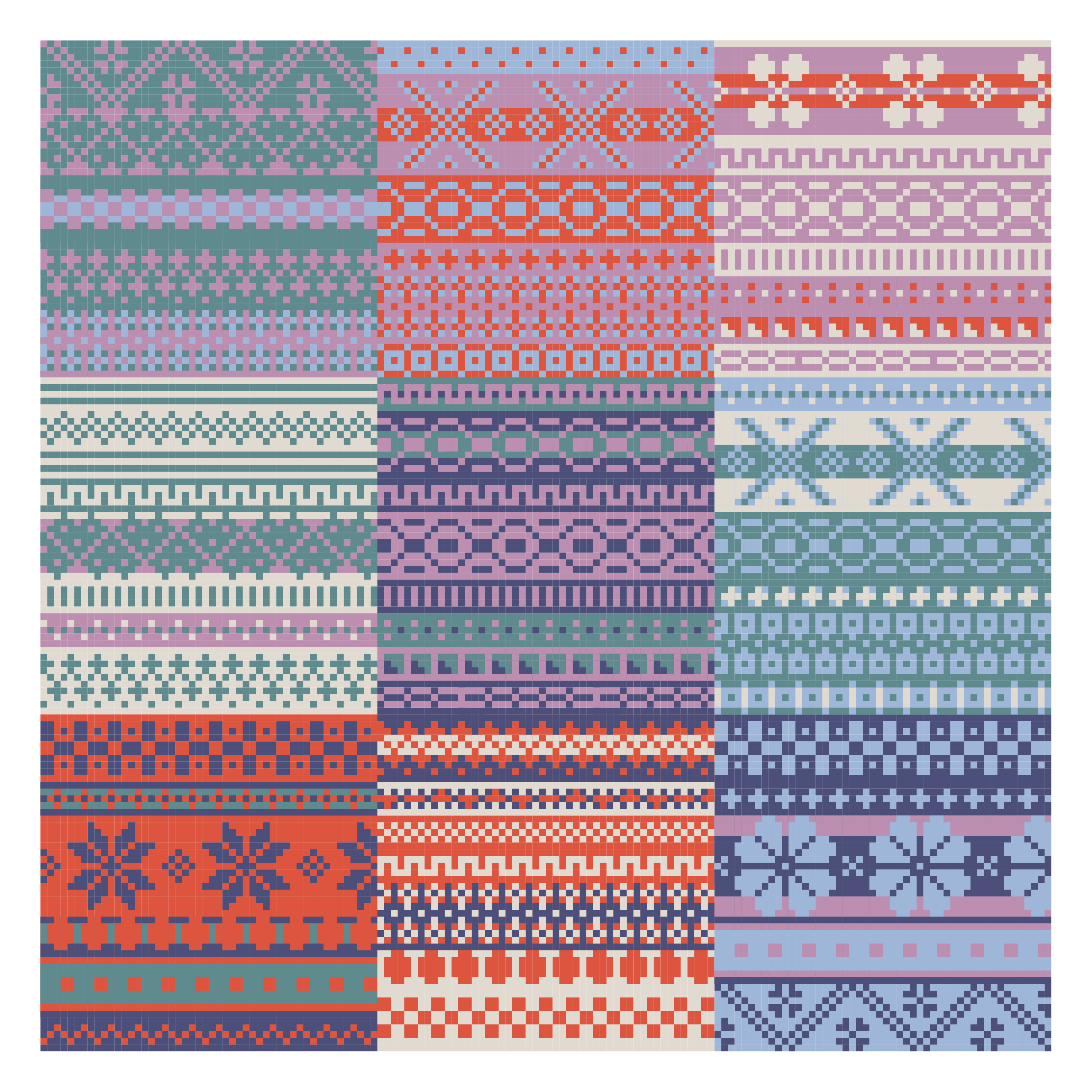 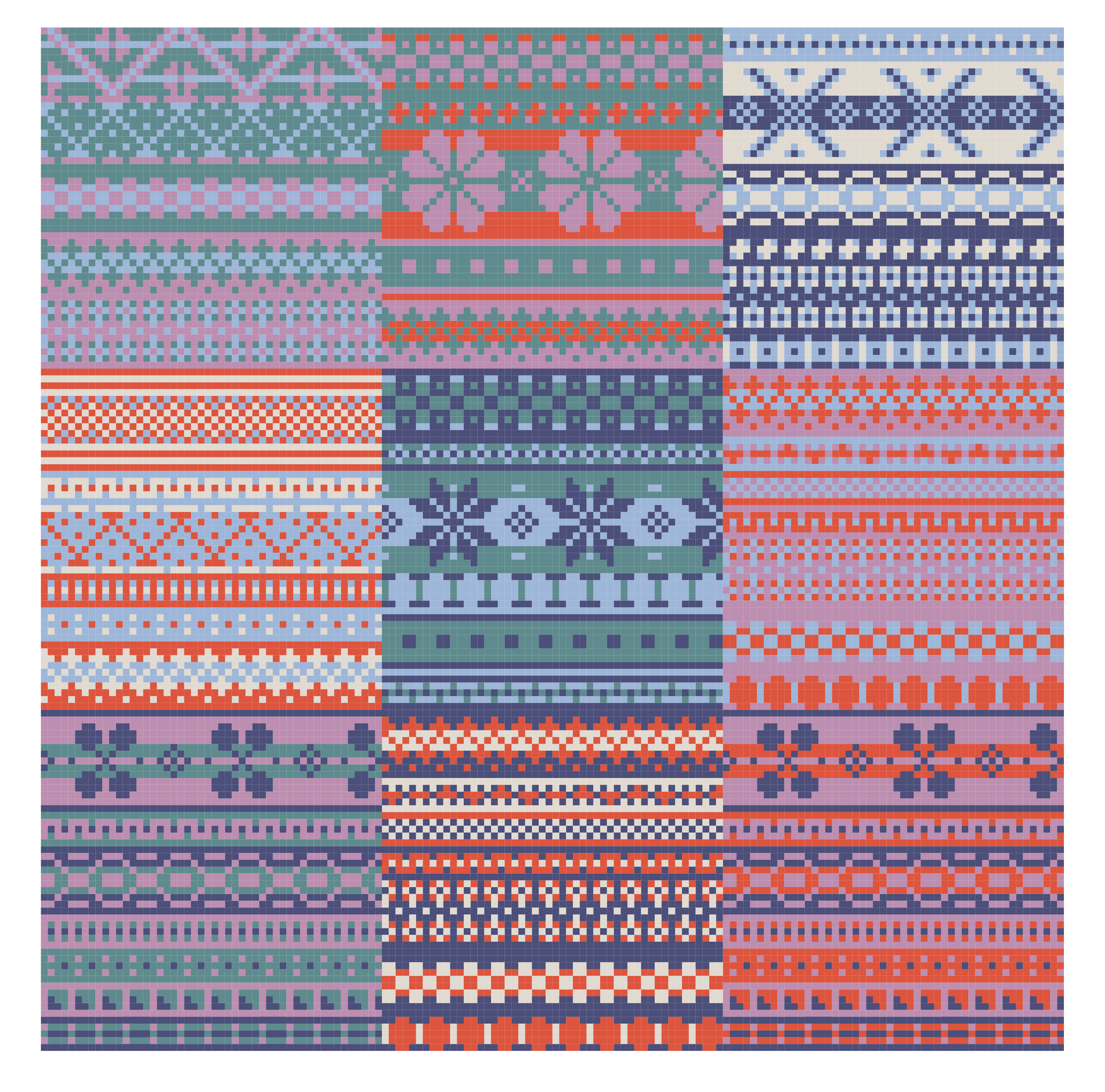 We landed on a combination of two- and three-color motifs within each square, and in the process chose six colors that stood out as the most-loved combination throughout our trials.

By this time, I had designed a number of motifs in traditional Fair Isle styles, and decided to move forward with 64 of them. About half of these were made up of two colors, and the others included three colors. We hoped it was a combination of motifs that, in a generated pattern, would replicate the “look” we chose for our squares. 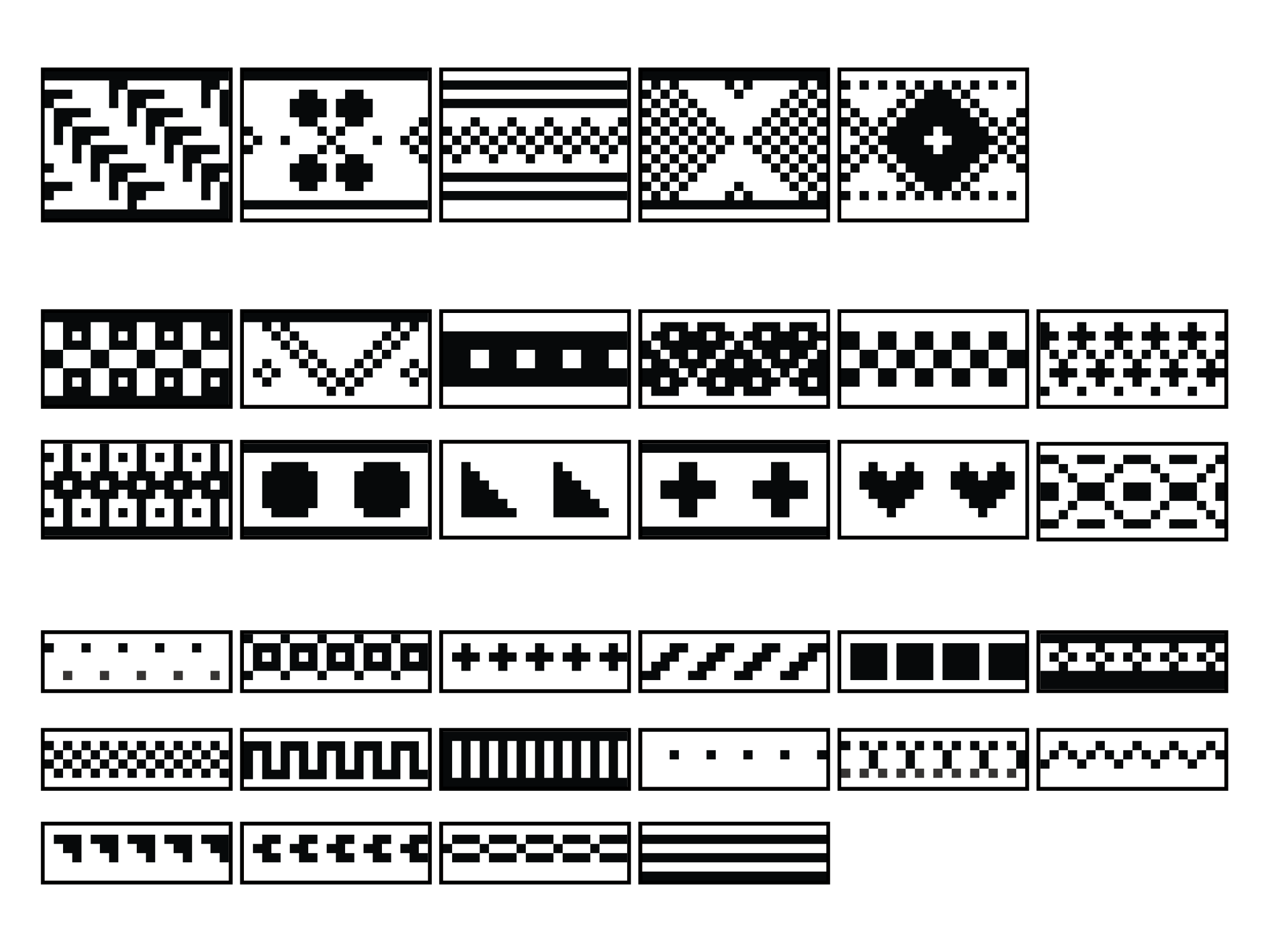 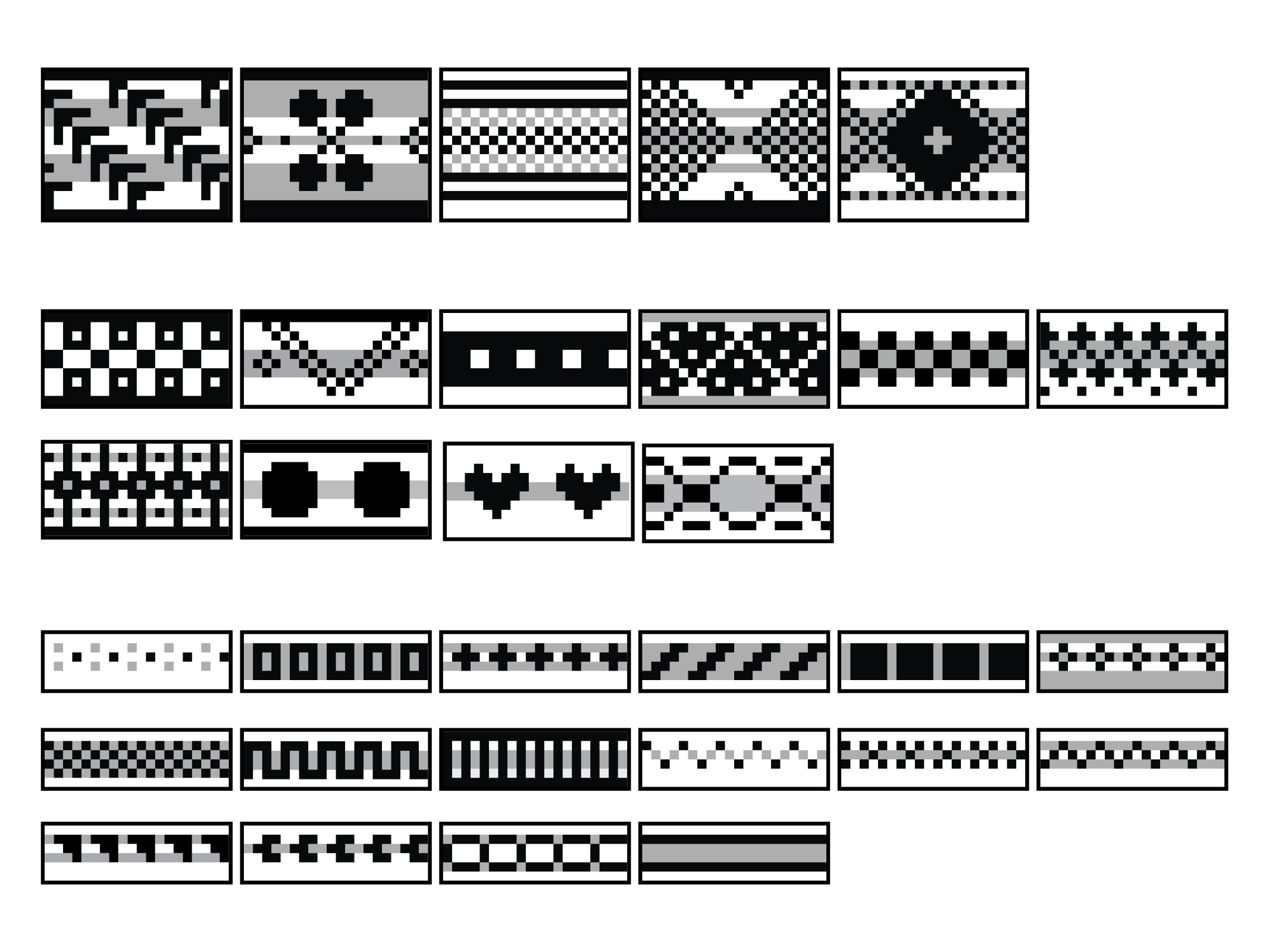 Each square also included an iconographic motif to add personality and a little bit of holiday razzle dazzle. 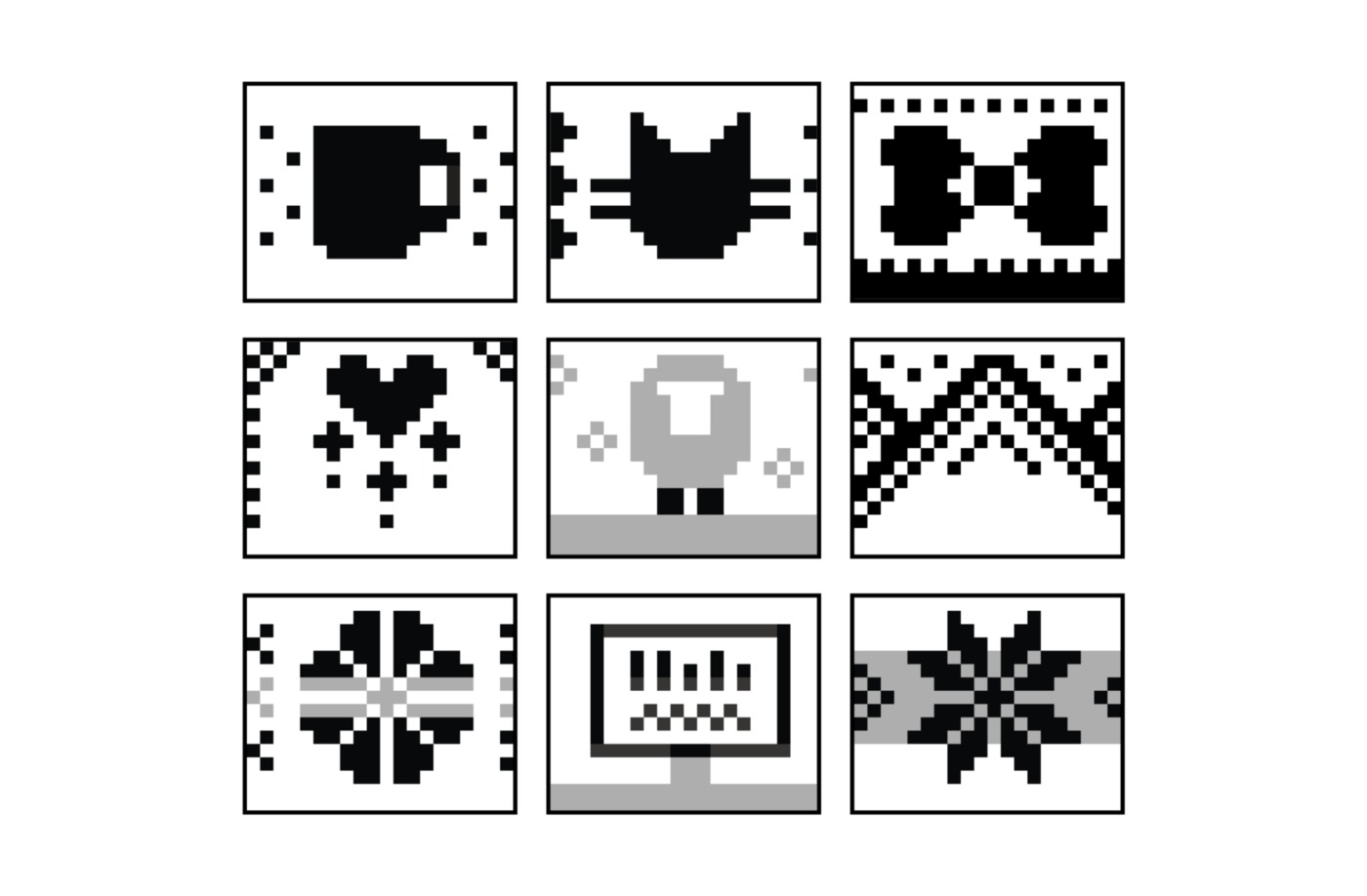 To generate the patterns, each row contained a single motif repeated horizontally, with unique combinations of motifs stacked vertically in each sampler. The patterns were 60 by 80 pixels, which, when knitted, creates a square because the stitches are narrower than they are wide. 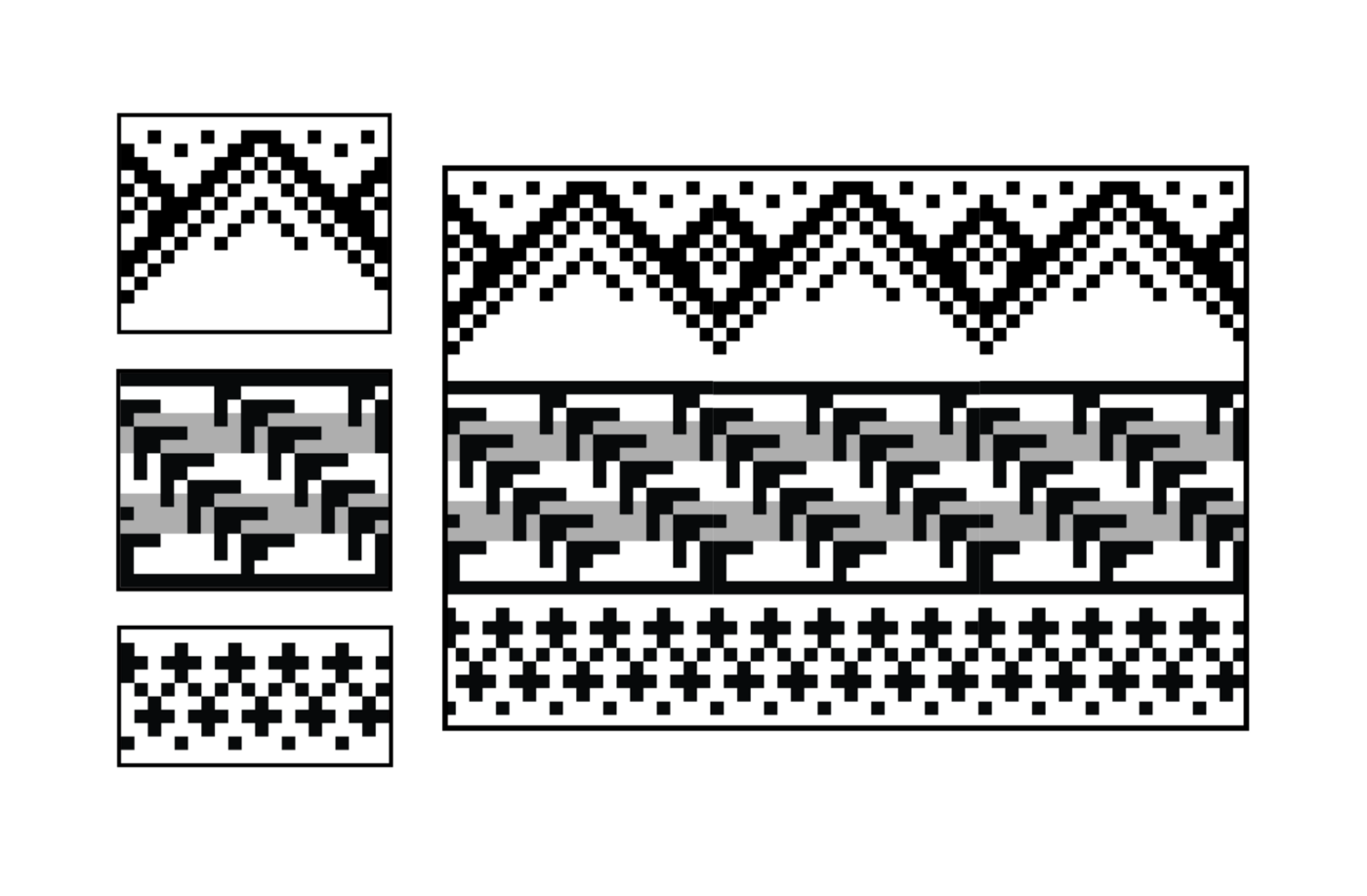 Each person in the office filled out a questionnaire to determine which motifs to use for their square, as well as the order and color of each motif. I designed the questionnaires as elementary school-style Christmas worksheets. (Growing up as the only Jew in my grade, I was always told I could read in the corner while the other kids filled theirs out, so they’ve always held a certain forbidden allure to me.) Each sheet started with a word search. This determined both the colors in the square and the icon motif. Another question asked how far people were traveling over the holidays; this distance pushed the icon motif further down the square depending on how far that person was traveling. Other questions similarly determined other aspects of each pattern.

Once we had everyone’s worksheets, I used a Processing sketch that Olivia wrote to convert the worksheet answers to unique knitting patterns. For each square, the program generated the following three types of image. 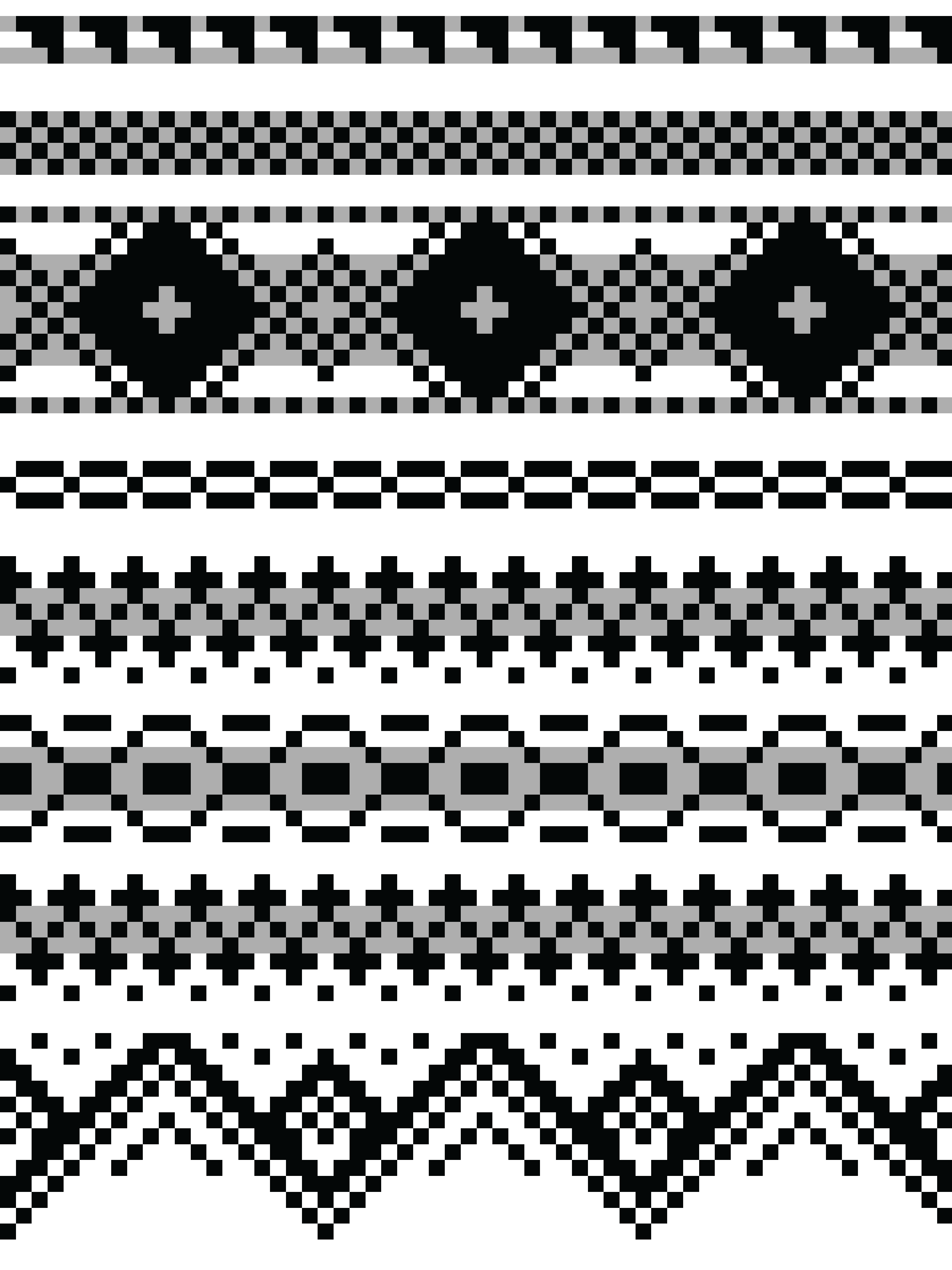 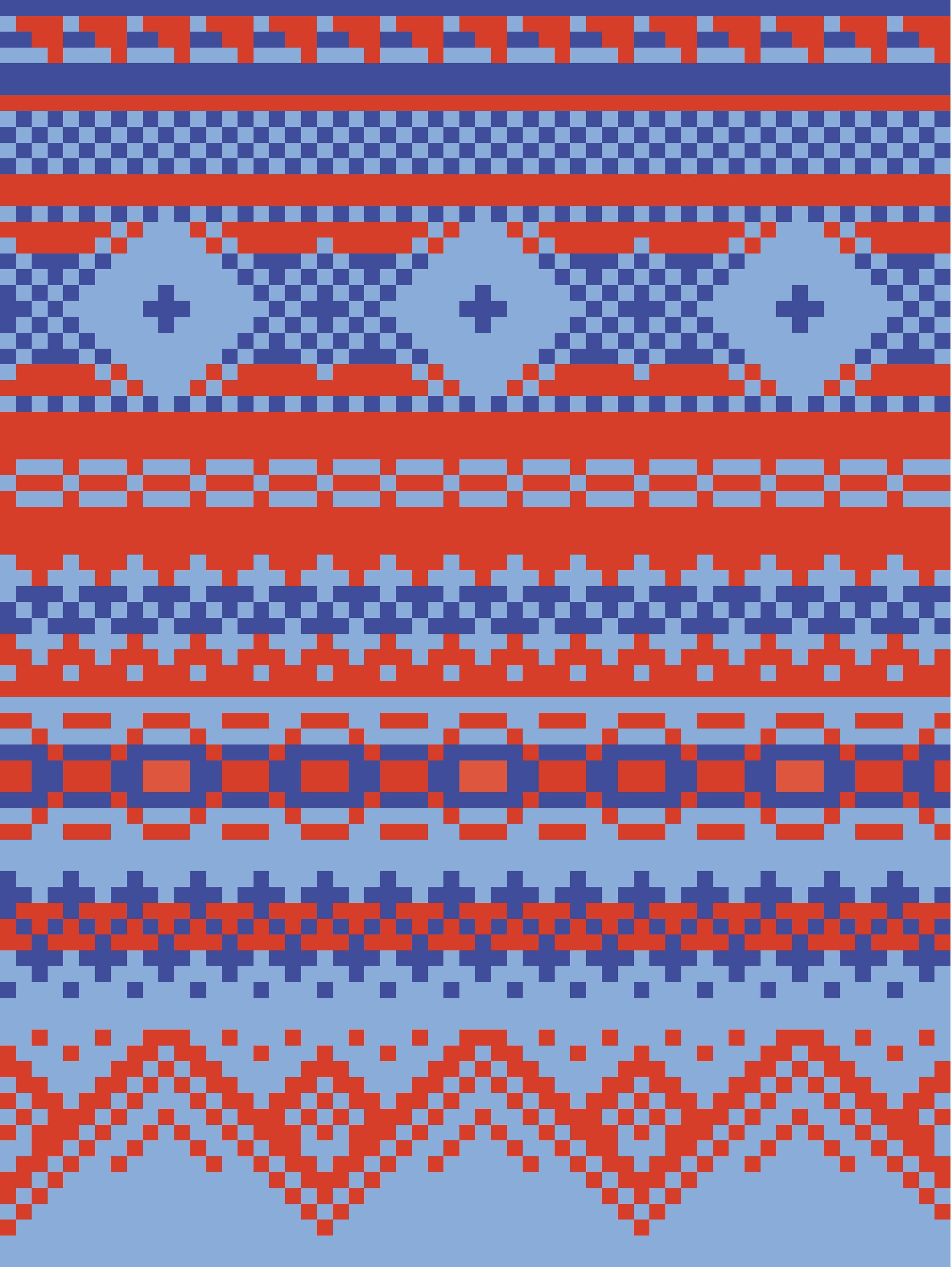 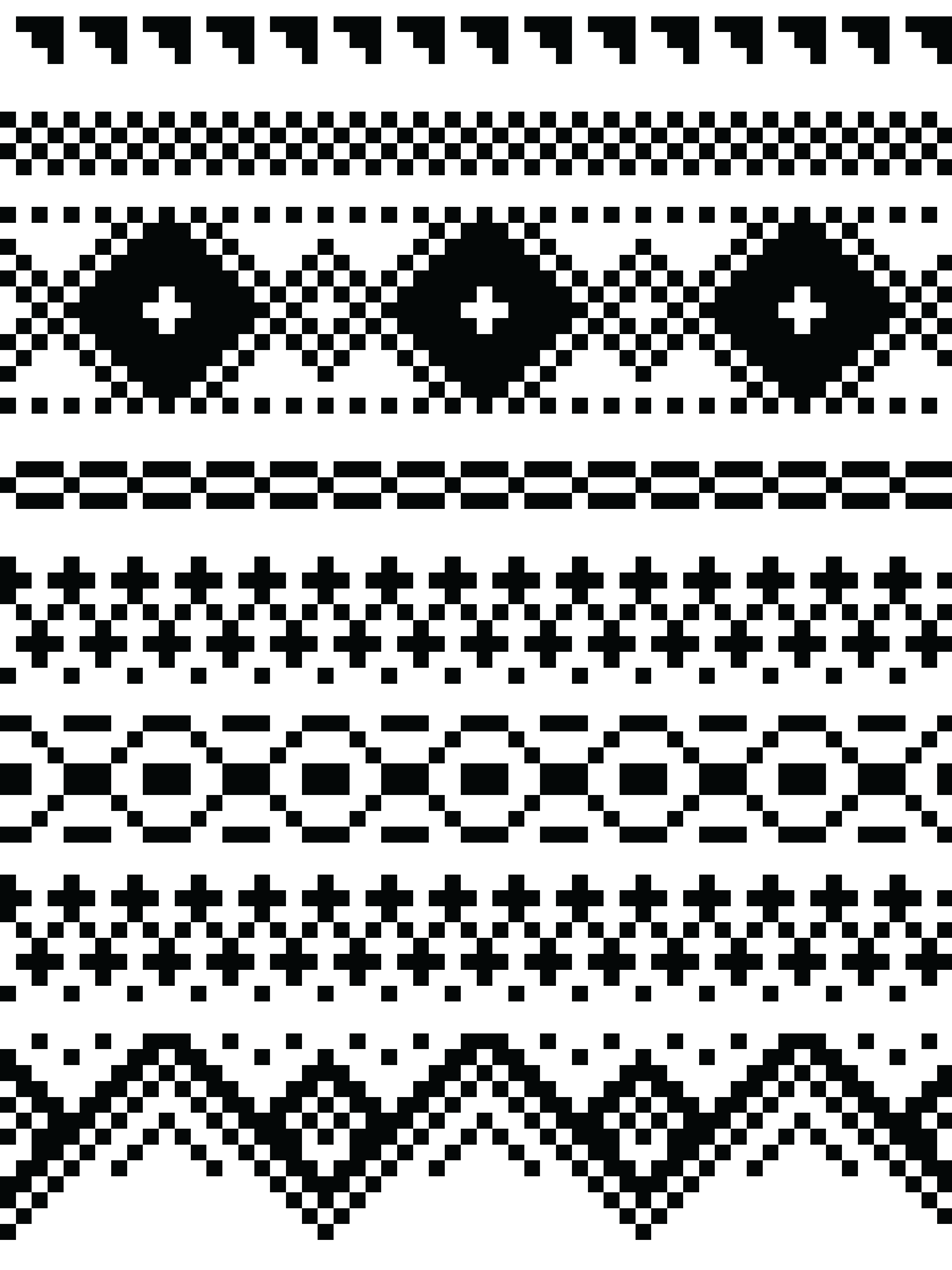 The first image shows the selected motifs as designed in black, white, and gray, and the second image incorporates the yarn colors. The third image is the one that the software uses to control the knitting machine. The machine can only knit 2 colors in a row at once, so we had to generate a simplified, 2-color version of the pattern to feed into the machine. Even though each square used 3 colors, no individual row used more than 2 colors. So, using the first two images as a reference, I fed the appropriate colors into the machine for each row. The end result was the 3-color patterned square. 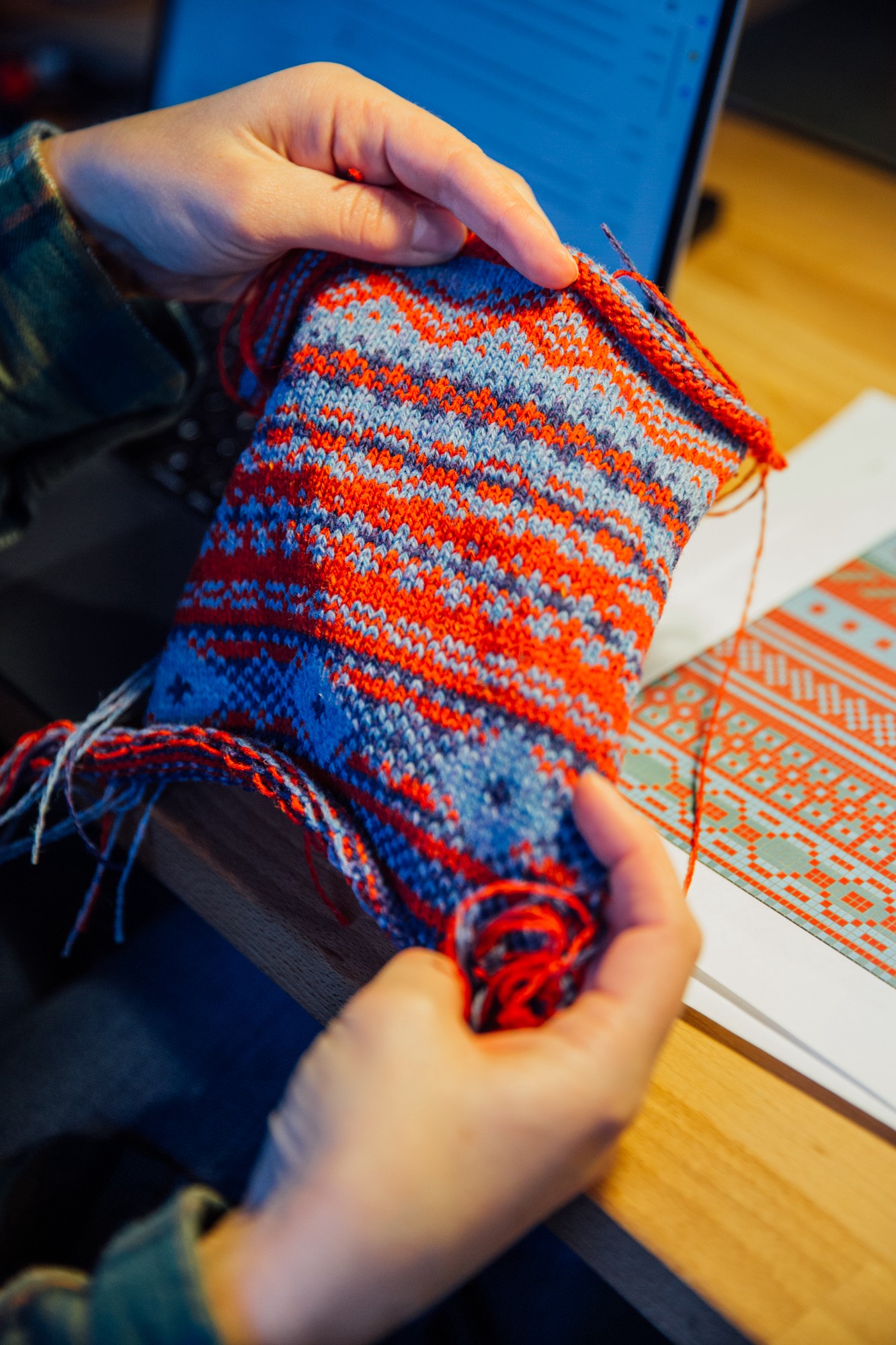 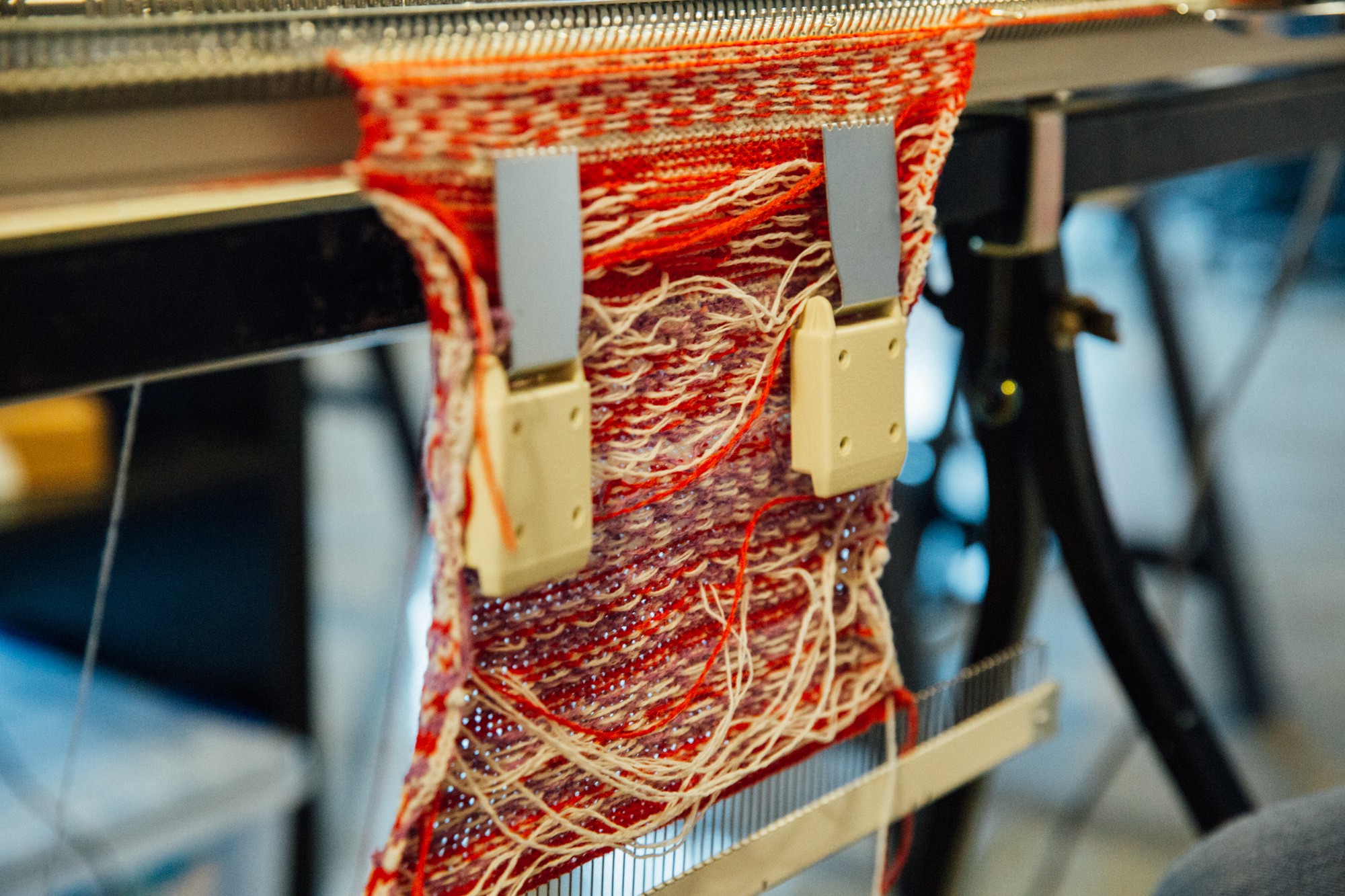 We were perhaps a little overly ambitious jumping into this project, and when the first square was finished, multiple people told me they couldn’t believe we were actually going to pull it off. However, each square got easier, and while the machine is a little more physically demanding than I expected, it isn’t too hard to tame. (We’re beginning to plan some more complex projects though, so maybe I shouldn’t jinx it.)

Once all the squares were knitted, Olivia photographed them, and Paul and I designed a card to send out to some friends of Fathom. Happy Holidays!