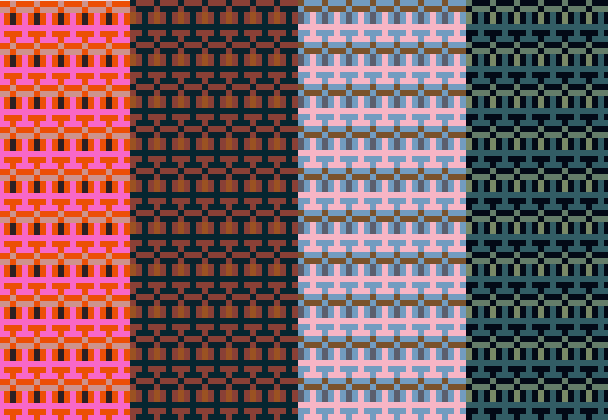 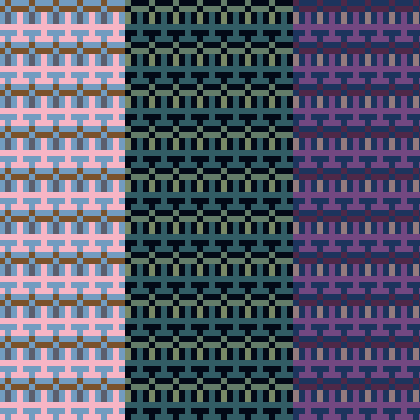 k
n
t
Olivia
Generative Knitting
I personally have long been fascinated by textile arts, and as a studio we are always looking for ways to explore data-driven designs beyond the computer screen. The 1:1 comparison of pixels to stitches has been widely explored, but it wasn’t until recently that our studio had the means to explore it ourselves. 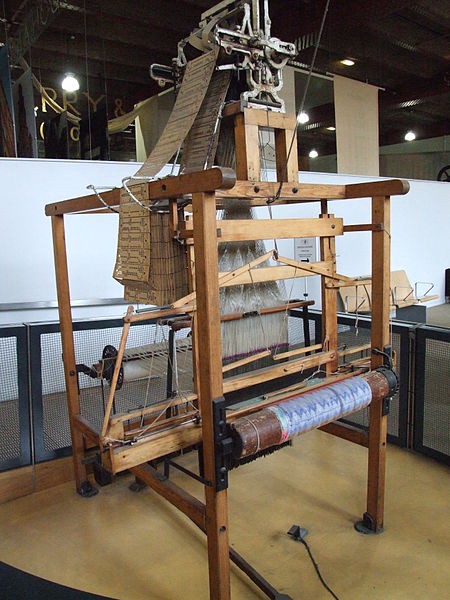 Since a full Jacquard loom was a little out of scope for a side project, we started looking into other machines. An embroidery machine was promising, but was unsuited for a project of a larger scale.

Then I stumbled upon Claire Williams‘s data knits work. I was so intrigued by the complexity of patterns she was able to knit using a hacked 90‘s electronic knitting machine that I started looking into how it was done. Turns out, she has instructions on how to get started with connecting these kinds of machines to a computer. While Anisha looked into the parts we would need for the electronics, I began my search for a knitting machine. I ended up finding a woman in western Massachusetts who works with these machines and had a nicely refurbished one that we were able to purchase. She even came to the studio and gave us a full tutorial on how to the machine works. 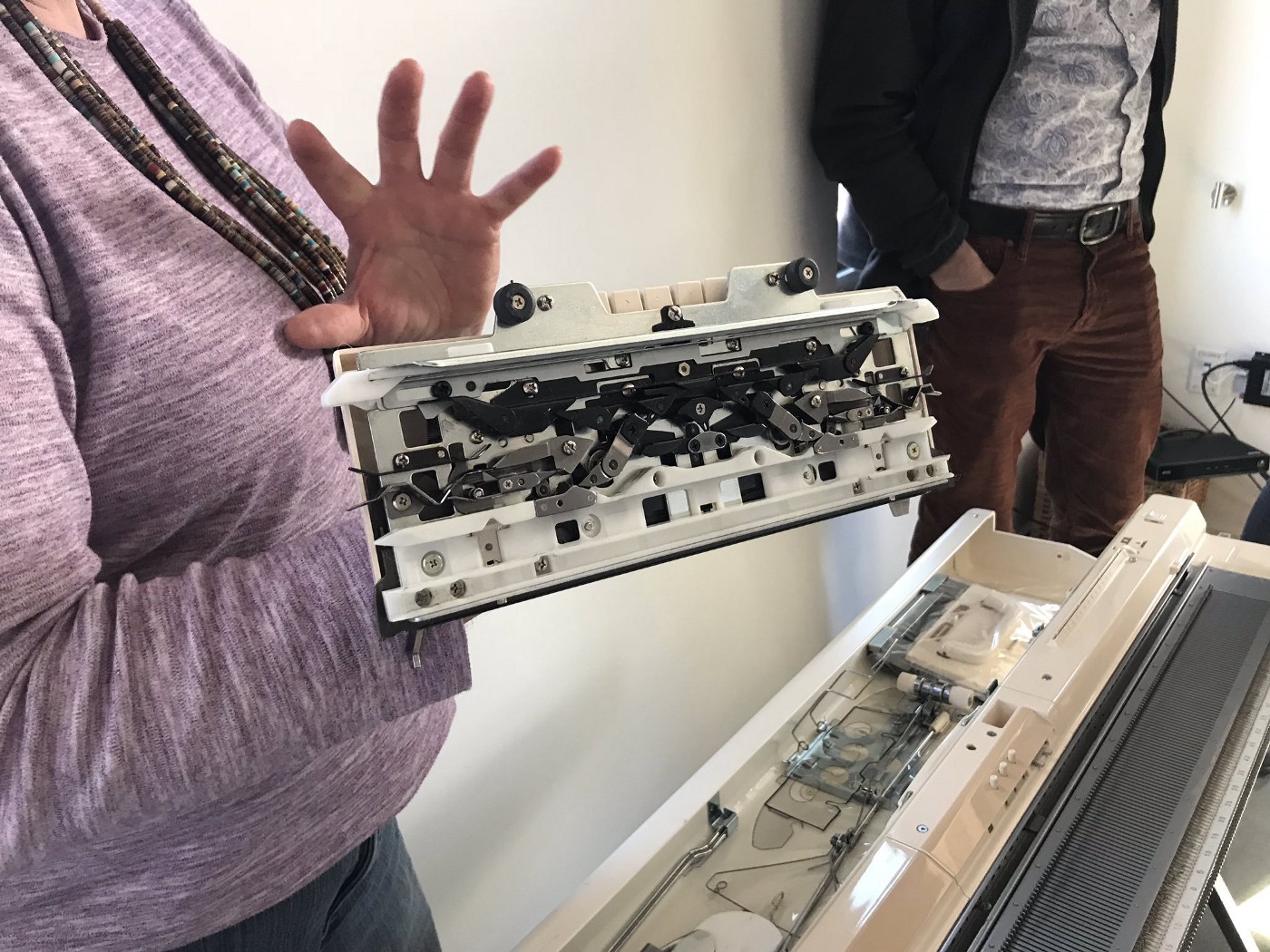 Learning about our new knitting machine

While we waited for the electronic interface to get up and running, Martha and I tested different techniques and patterns with the machine. 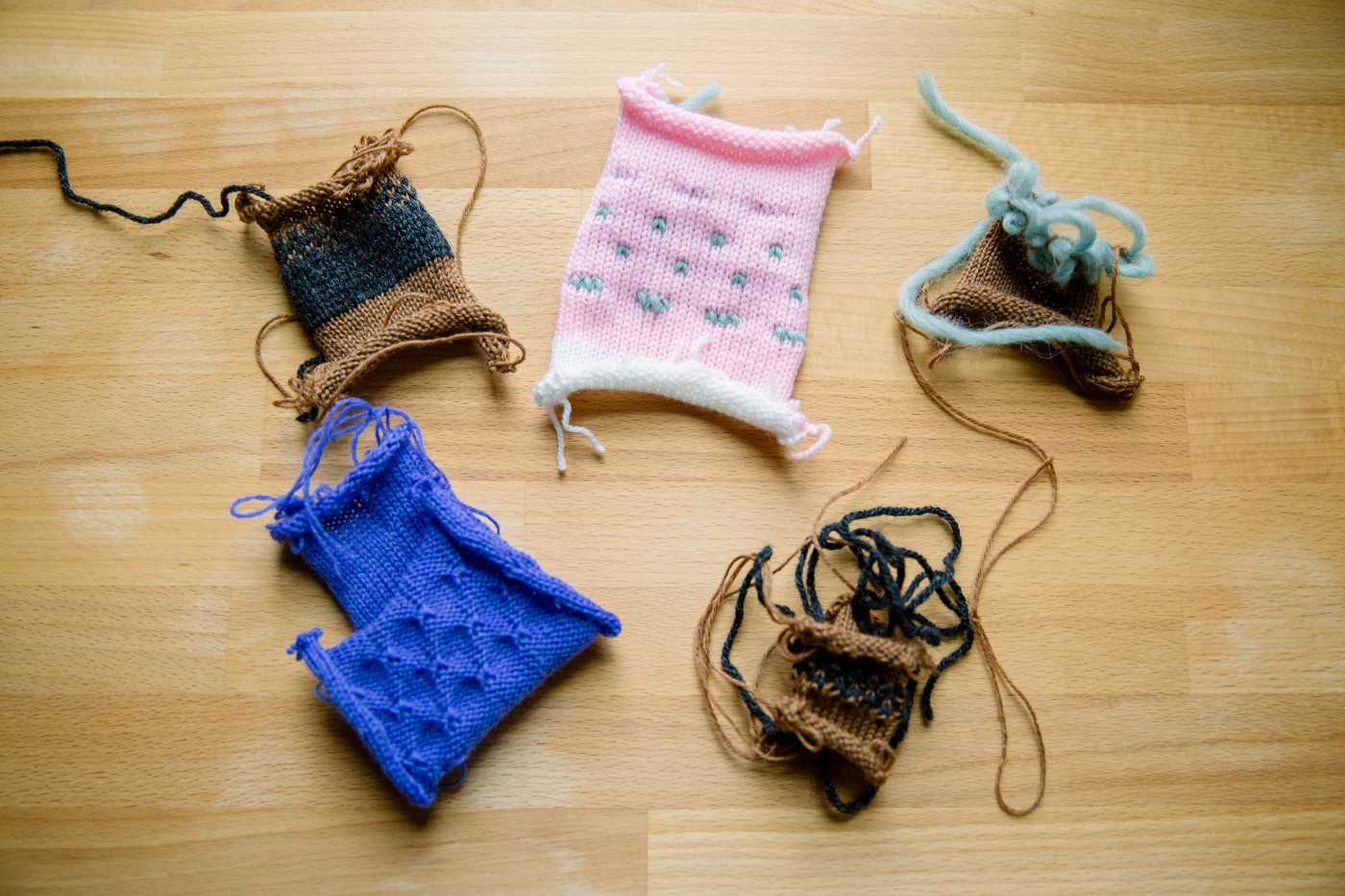 During that time, we also went to the a Bauhaus exhibit at the Harvard Art Museums, and I was completely blown away by Anni Albers’s and Gunta Stölzl’s work. That led me to pick up Albers’s book On Weaving. 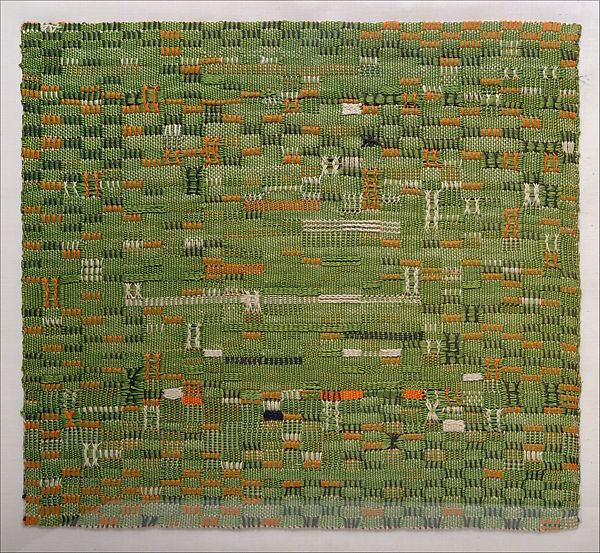 First, I was interested in seeing what you could pull from just a photo. I began with photos that had a great balance of colors, hoping that reapplying those same ratios in different orientations could create new works with a similar mood.

In making mistakes, I also got some cool results. 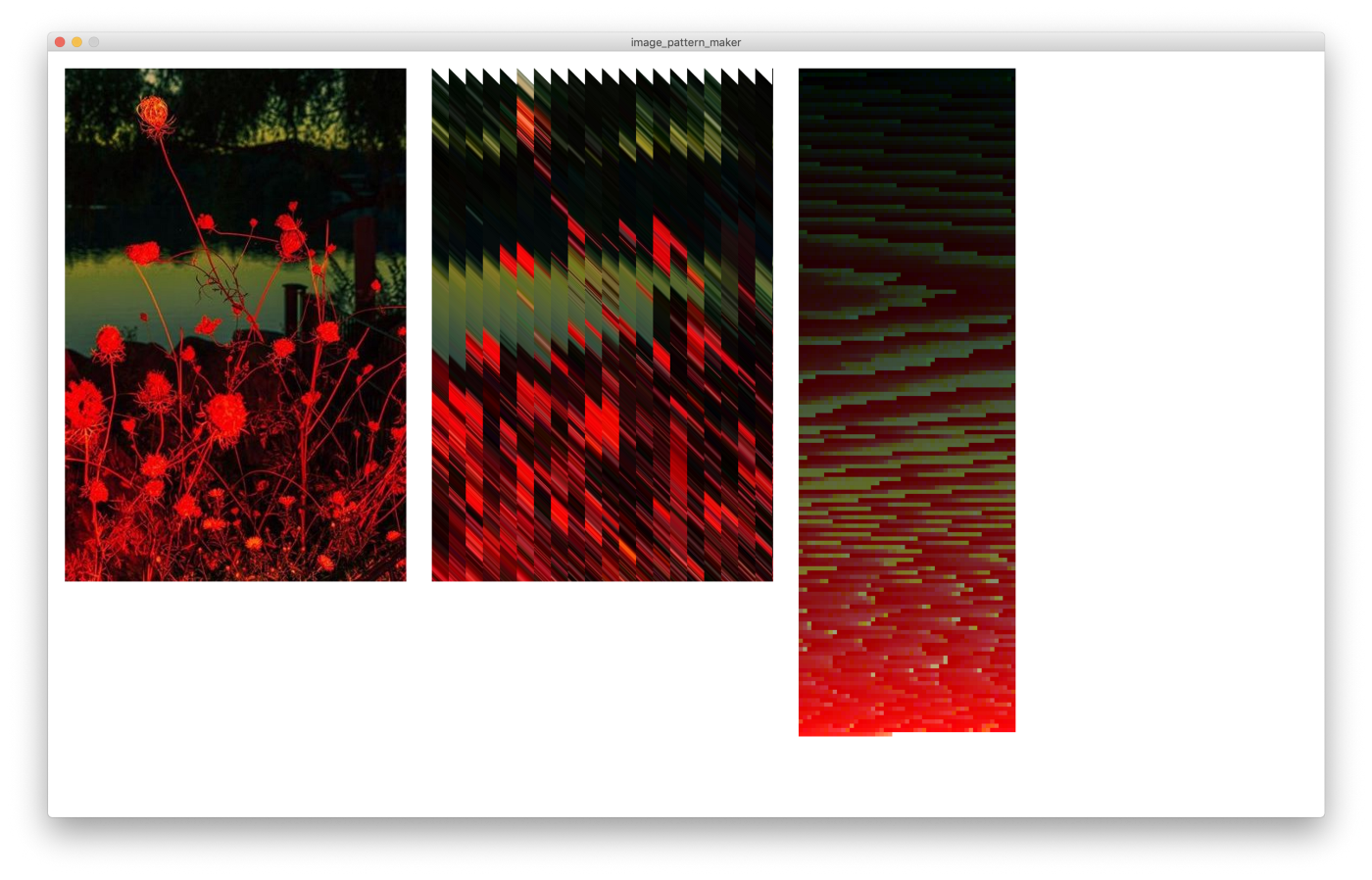 I then started to think more about the limitations of our machine (with an eye towards actually knitting something). In theory, our machine can use as many colors as you want, but only 2 can be loaded in at a time. Some accessories allow four colors at a time, so I set my sights on four-color patterns.

I didn’t have any knitting patterns handy, so I drew a few “pattern pieces” in Photoshop, and used those as the blueprints onto which I could map new colors. I wrote a few sketches in Processing to map the photo colors onto these pieces, and also generate different combinations of the pieces to create different patterns.

The program also worked by passing in a set palette, and having it randomly select four colors to apply to a pattern. 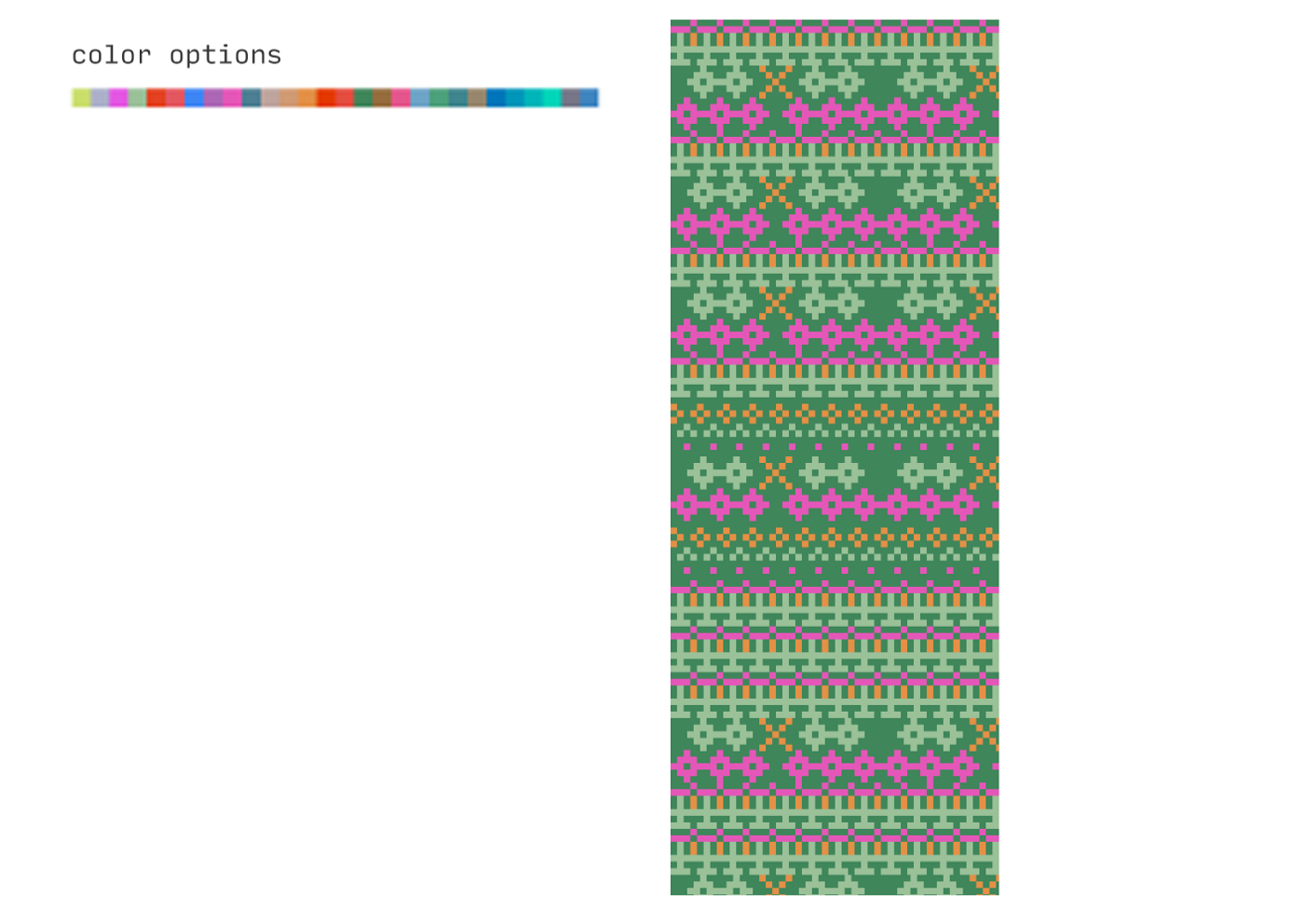 I realized later that my pattern “pieces” didn’t line up, so something like this would have to be adjusted to actually be knit-able, but it looks cool nonetheless!

With those patterns in place, it was time to see if I could actually produce them with the machine.

I printed out a small sample of all my generated palettes to bring to the store and see which colors were available. 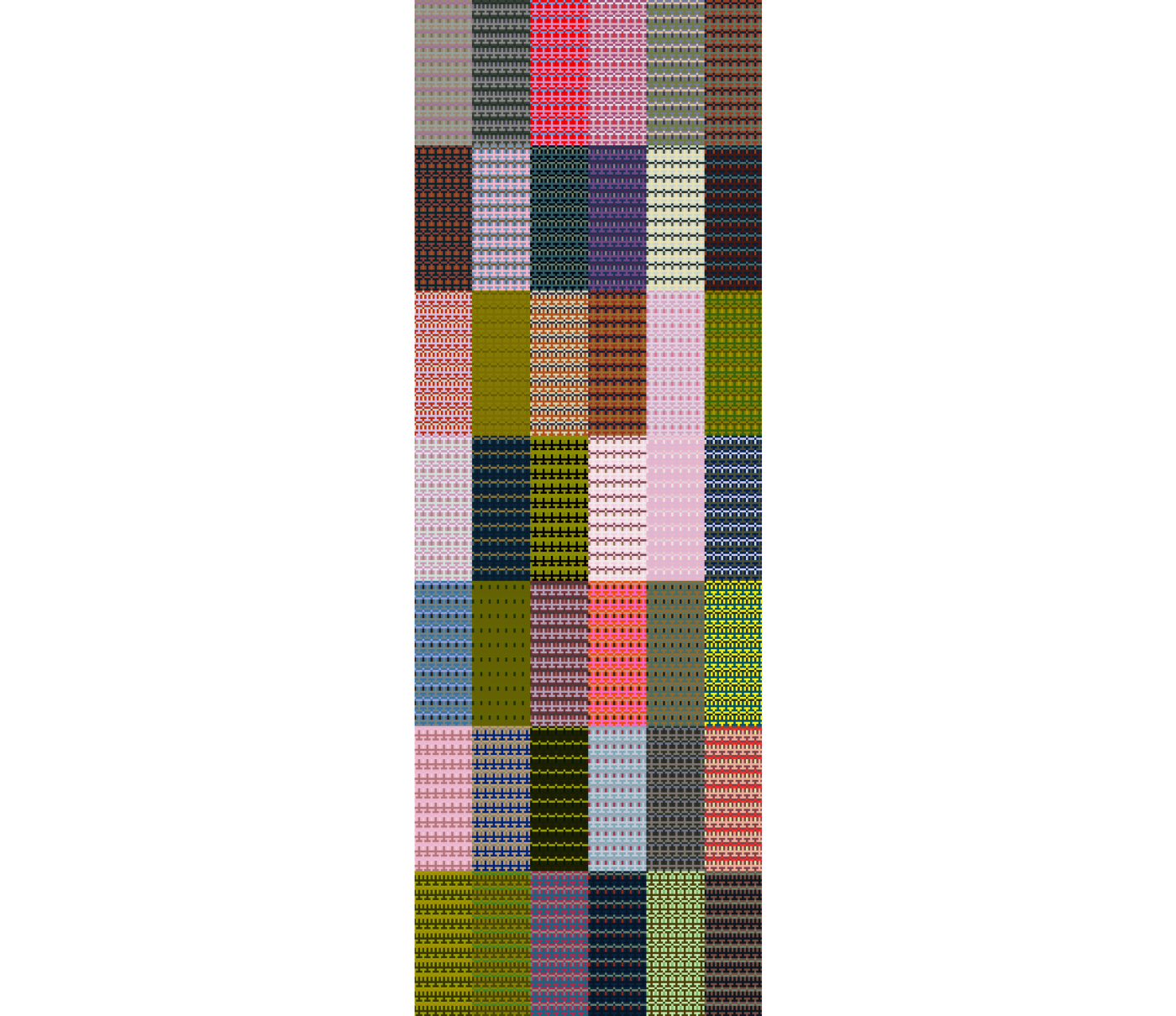 From far away, this also started to look like its own giant pattern…

It only took five hours…but I did knit one pattern I had generated, and I am really excited by the results. My knitting and finishing techniques need some work, but the colors and texture that resulted are lovely.

I struggle to keep track of where I’m at in a pattern, so I threw together a little Processing sketch to help me. One thing I didn’t realize while making this tool is that the machine knits patterns upside down! Oh well: I’ve been told there are no mistakes in knitting. 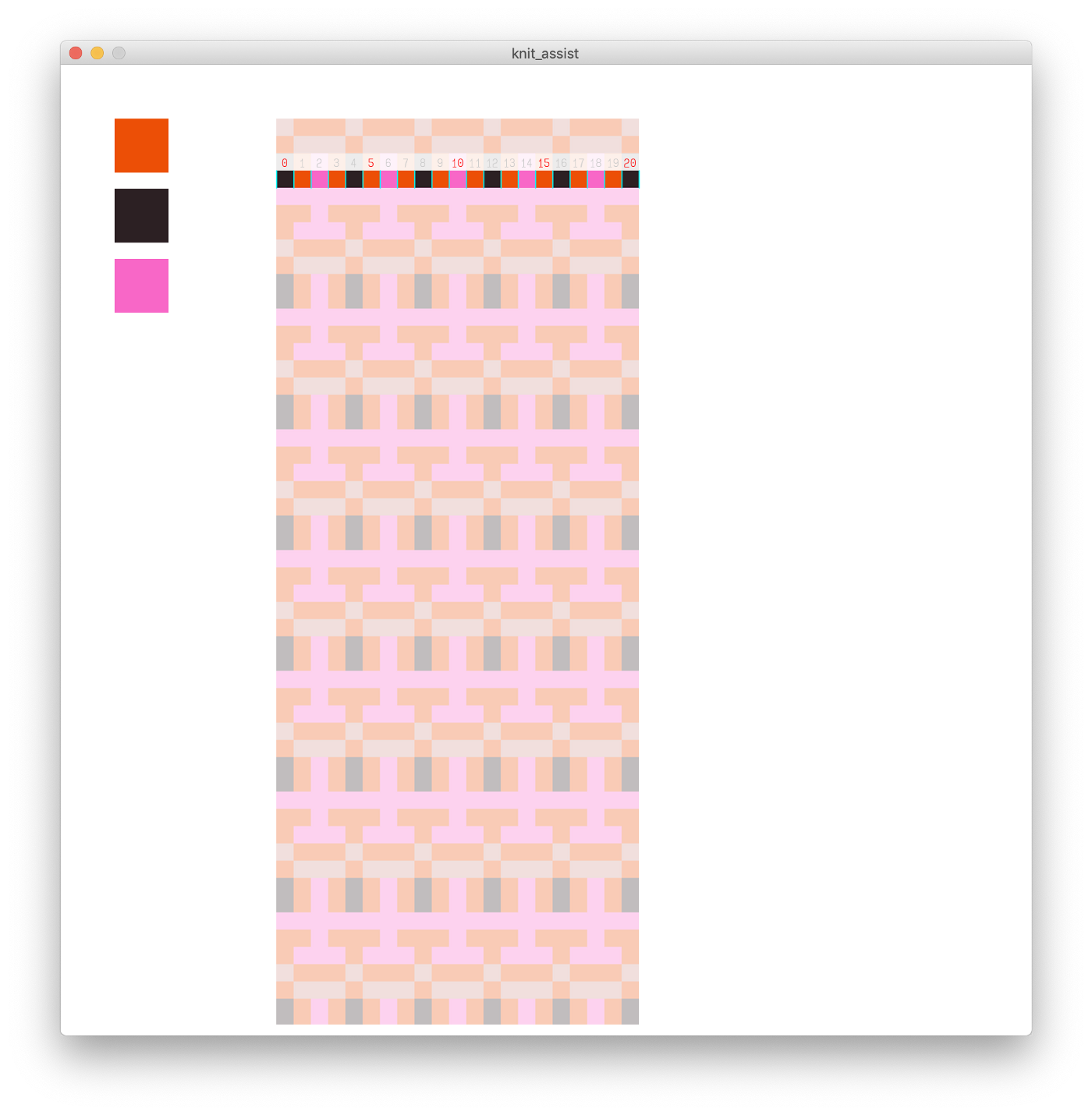 With more of the automation in place (and more practice!), we‘ll be able to explore the more irregular, glitchy, and tapestry-like patterns. 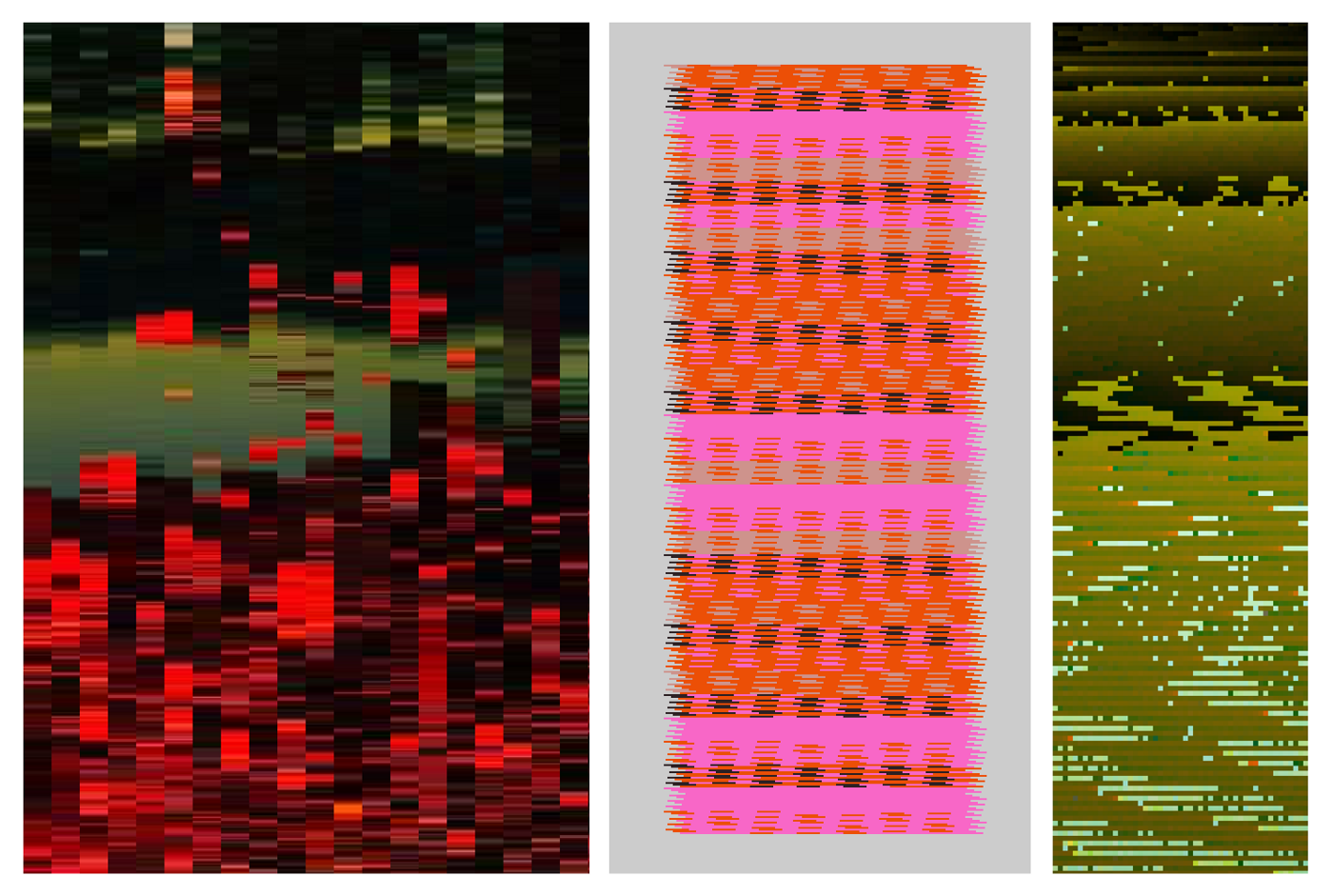 There’s also so much more to experiment with on the physical side that moves beyond color and its arrangement — like the different textures and sheen of the yarn (maybe we could use four different black yarns with different textures!), or different types of stitches. I’m also looking forward to exploring more meaningful data relationships between the data generating the colors and the patterns themselves.