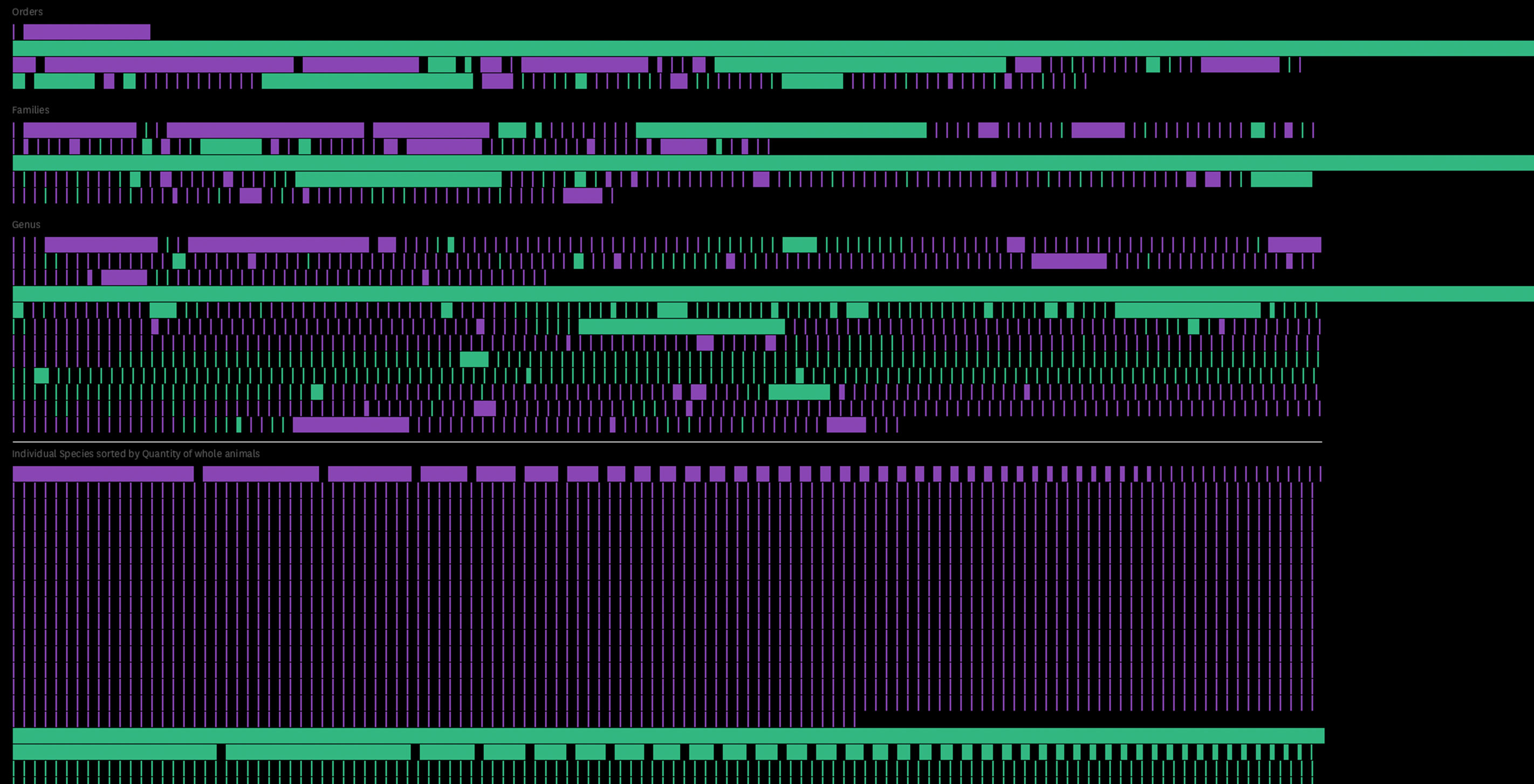 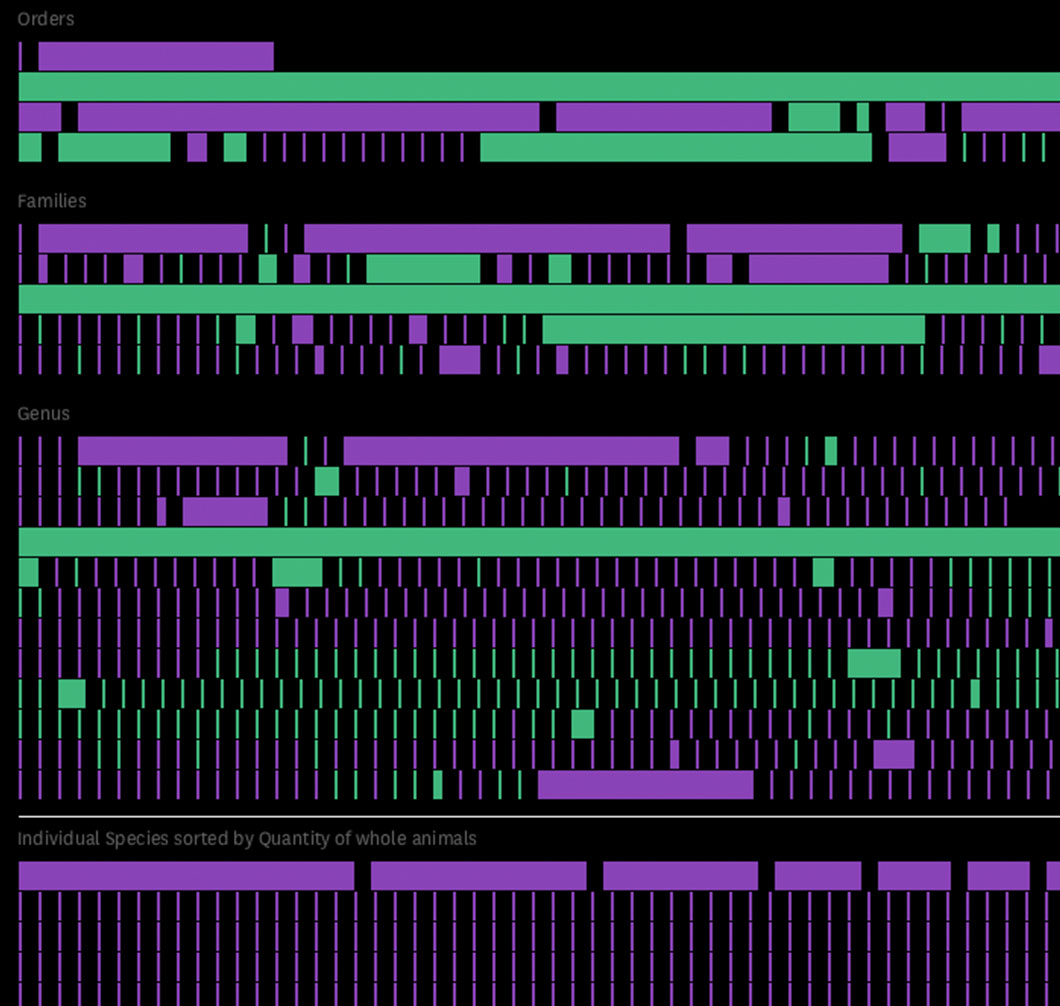 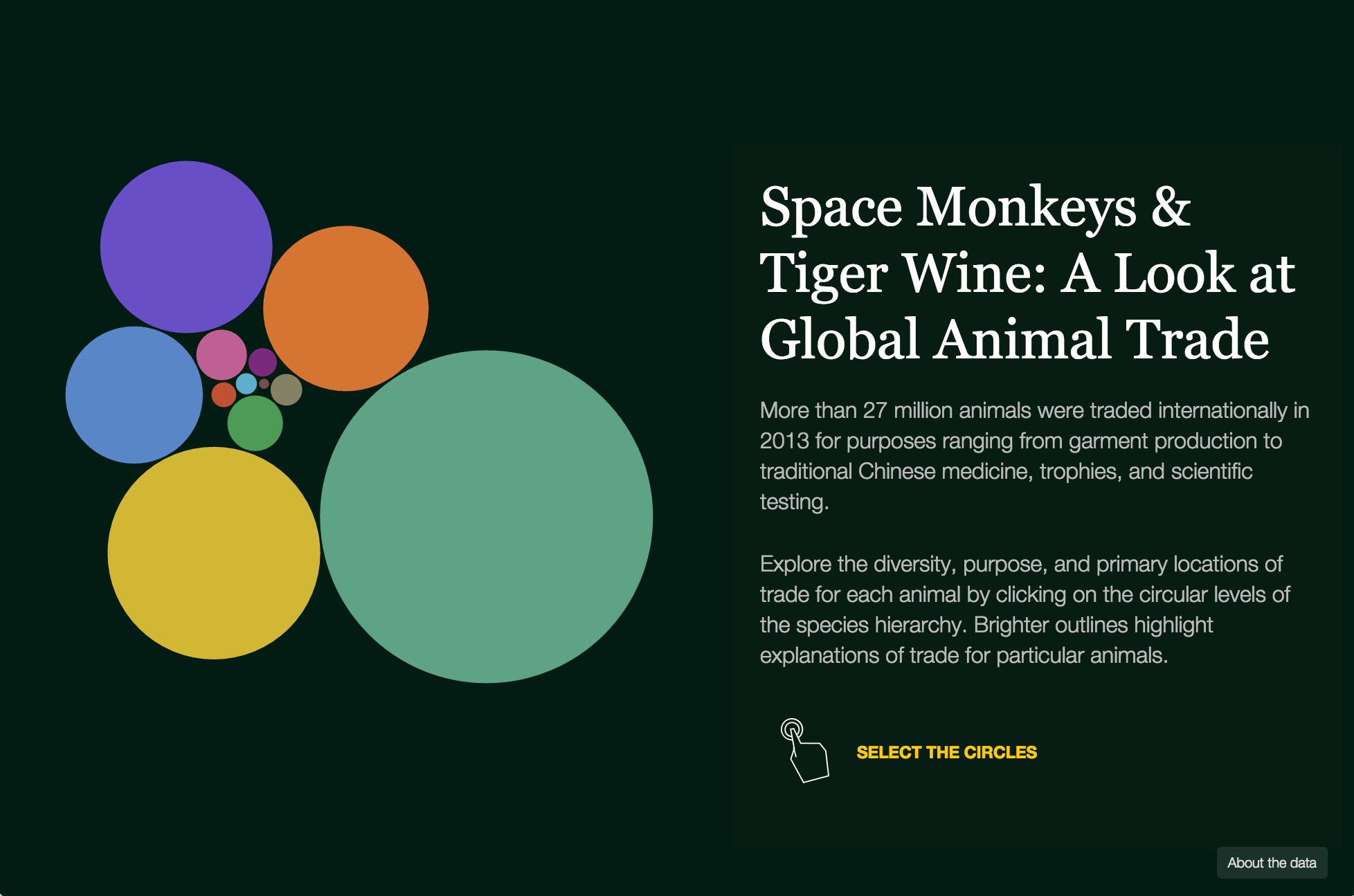 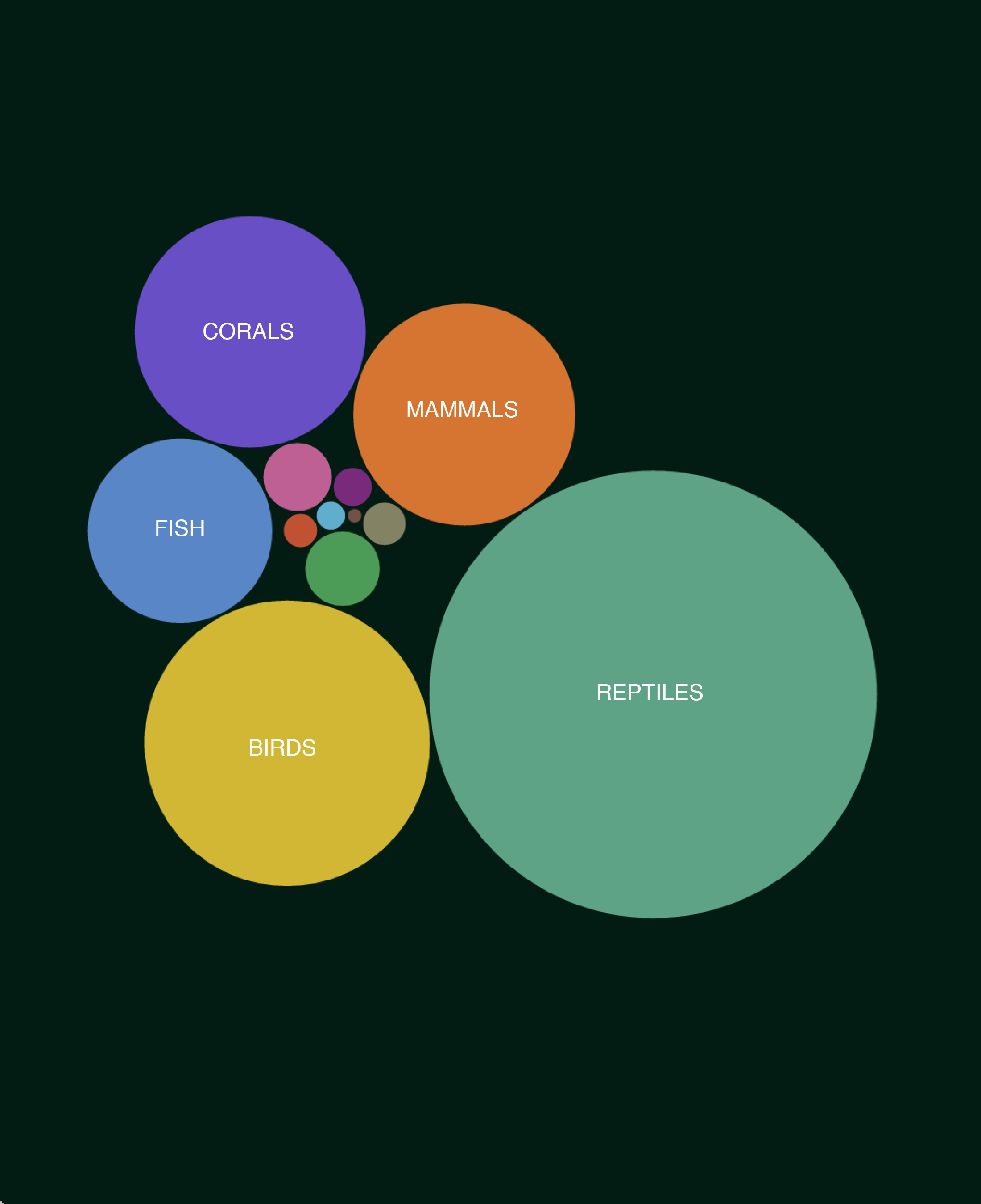 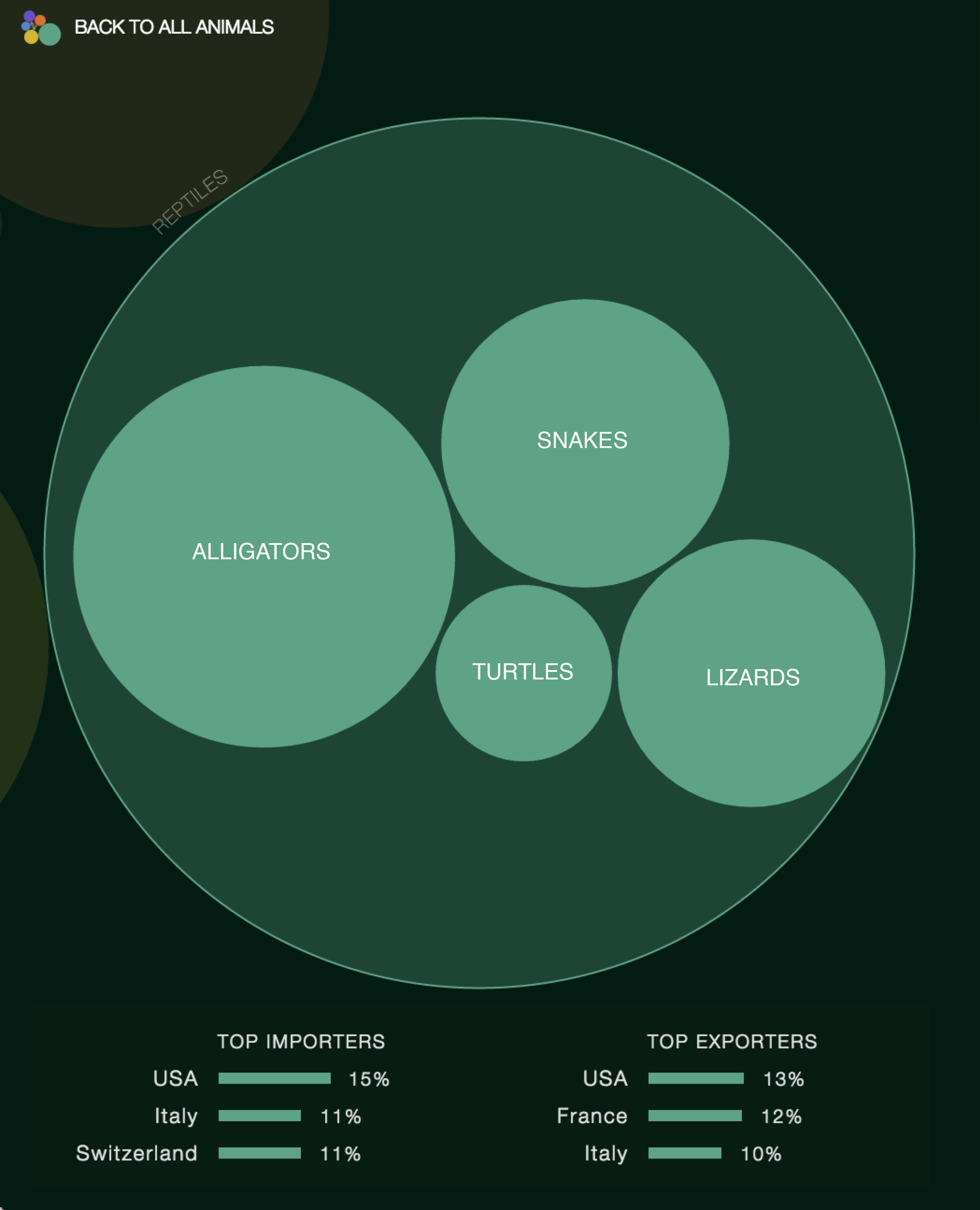 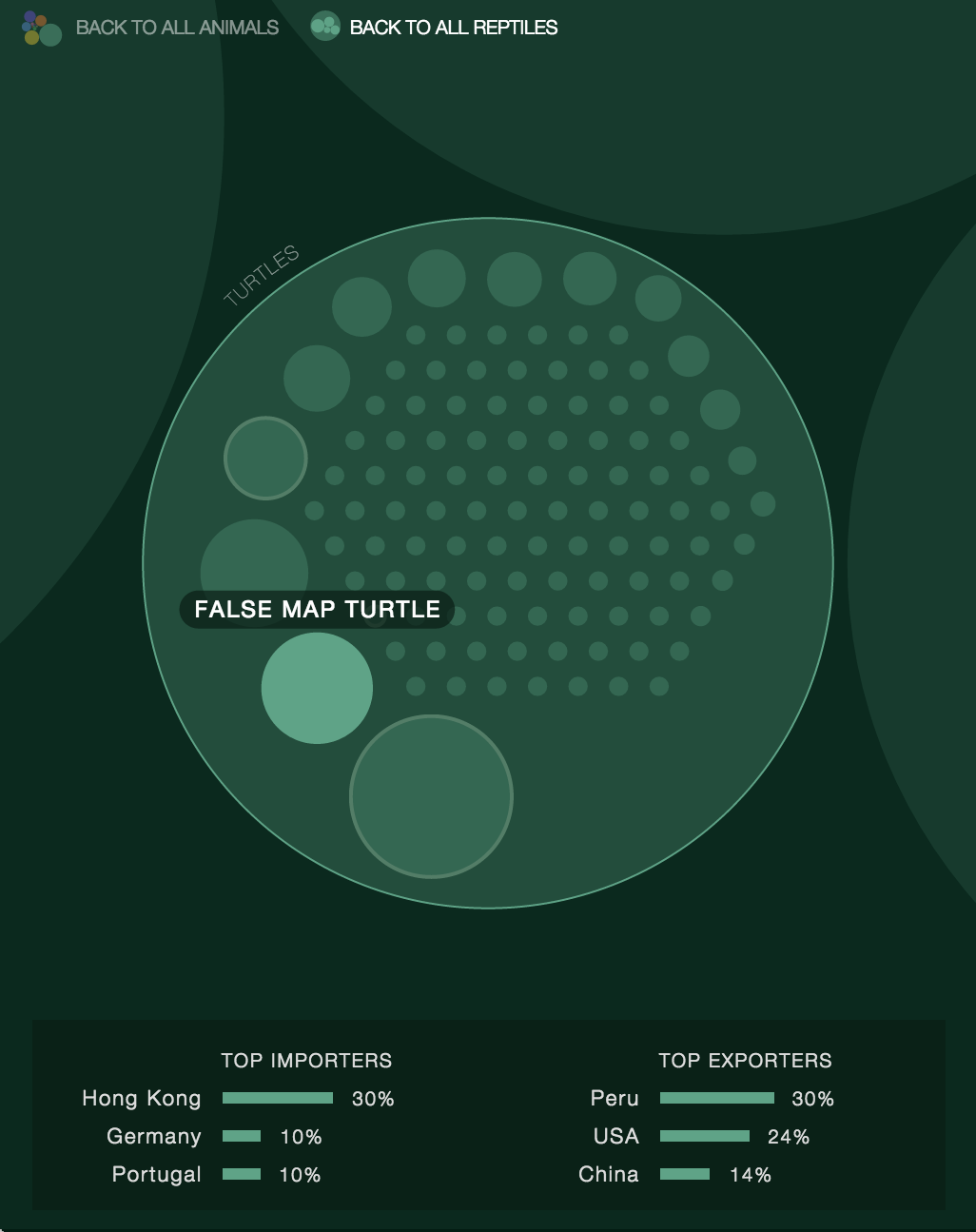 We dealt with trade at a vast range of scales, and balanced animals exchanged by the millions with those traded by the tens or hundreds. Giving the tree map a zoom feature allowed us to represent animals on the same scale without distorting the depiction of those on the highest or lowest ends of the spectrum. Plus representing 4,100 medicinal leeches for every whale shark in a single view seemed as if it would suggest a misguided comparison. 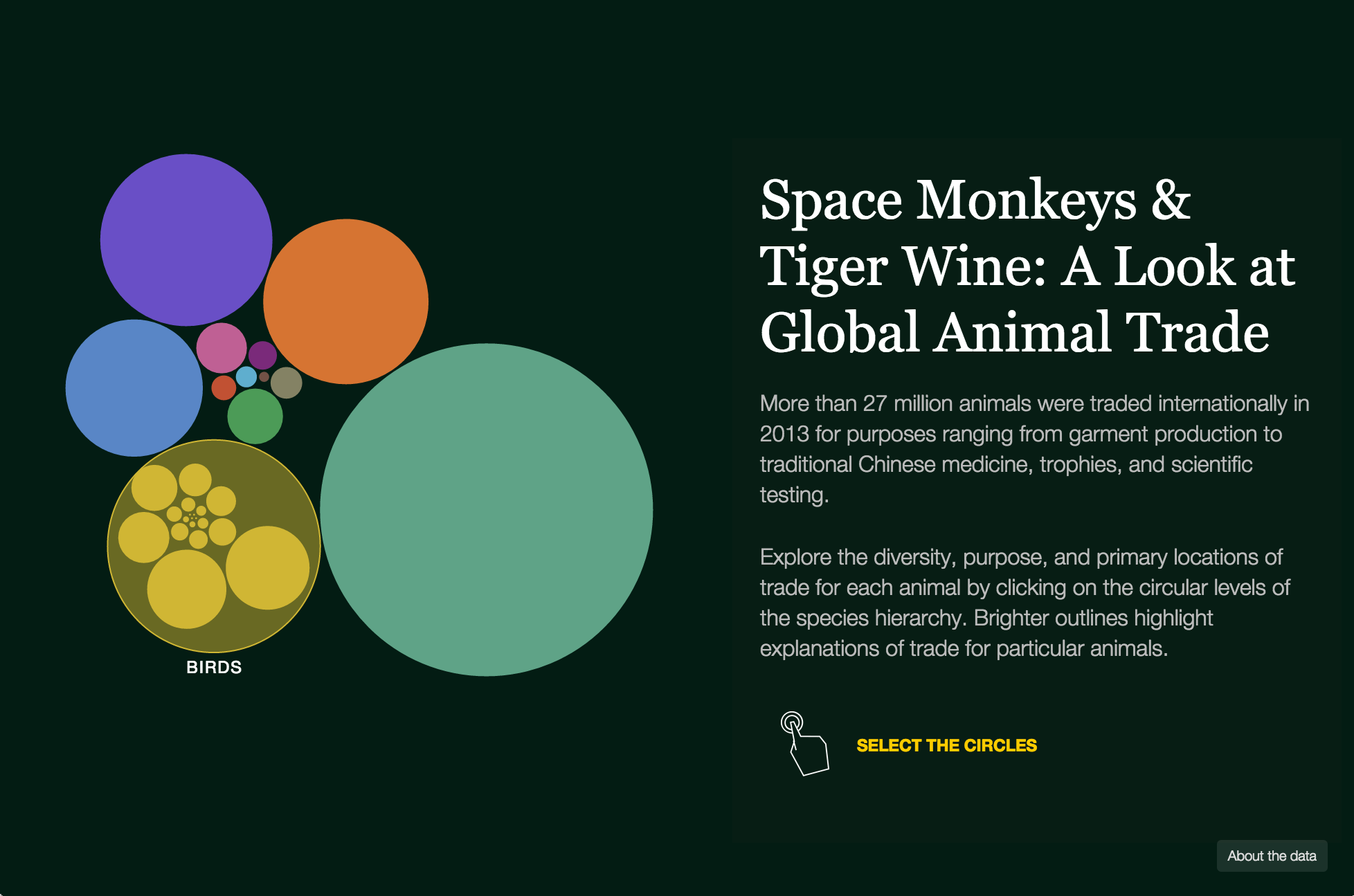 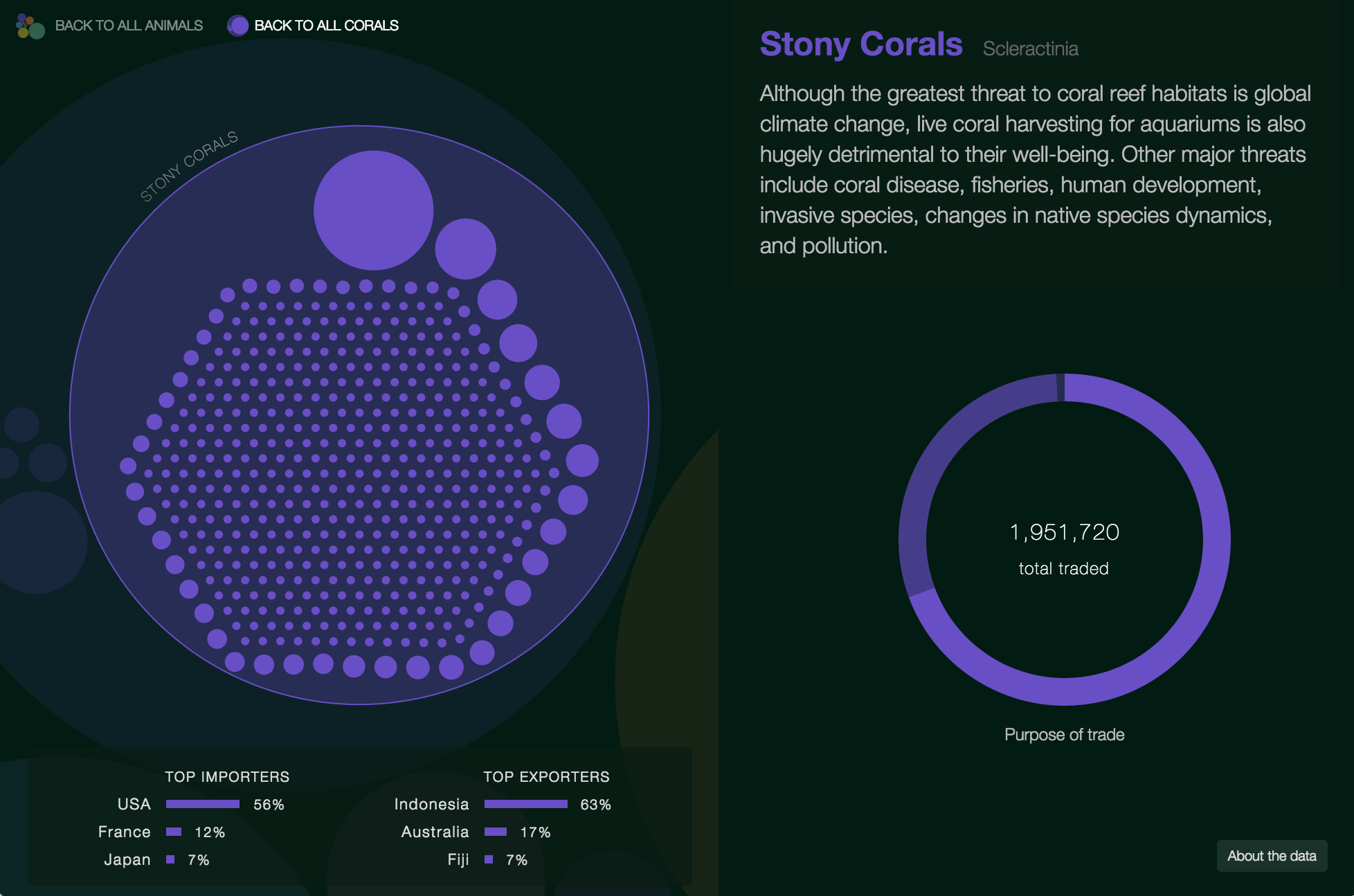 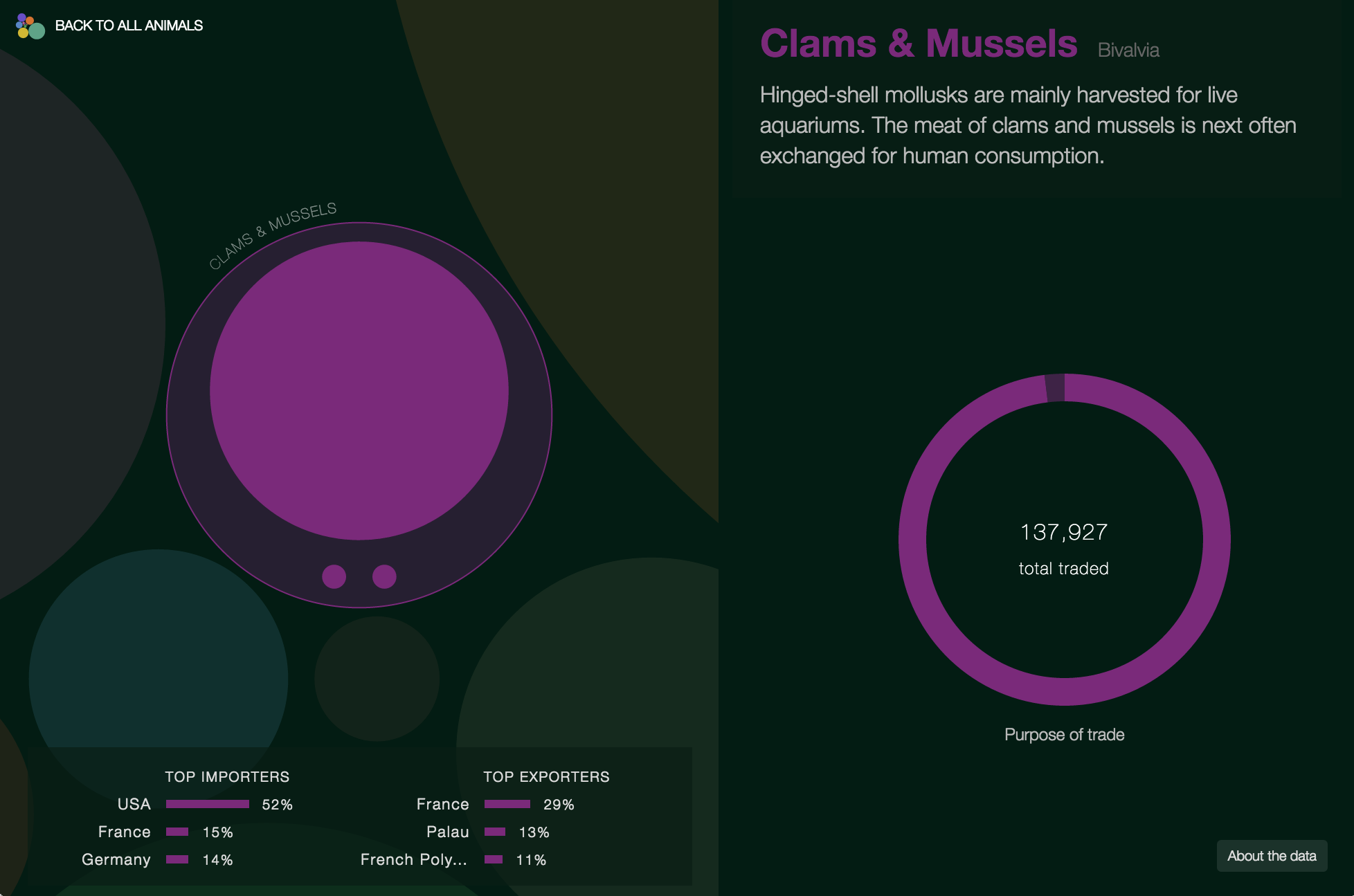 In addition to the central quantitative representation, a hollowed pie chart (some call it a donut) enables users to explore the stranger qualitative oddities surrounding animal trade. Hovering over the chart shows the variety of ways animals are used (or consumed, exhibited, studied, domesticated, skinned, woven, schmeared, etc.) in the international market. American black bears, for instance, are traded for their teeth, skulls, hair, gallbladders, as trophies, and live. 85% of tiger trade, on the other hand, is for purposes in traditional Chinese medicine. 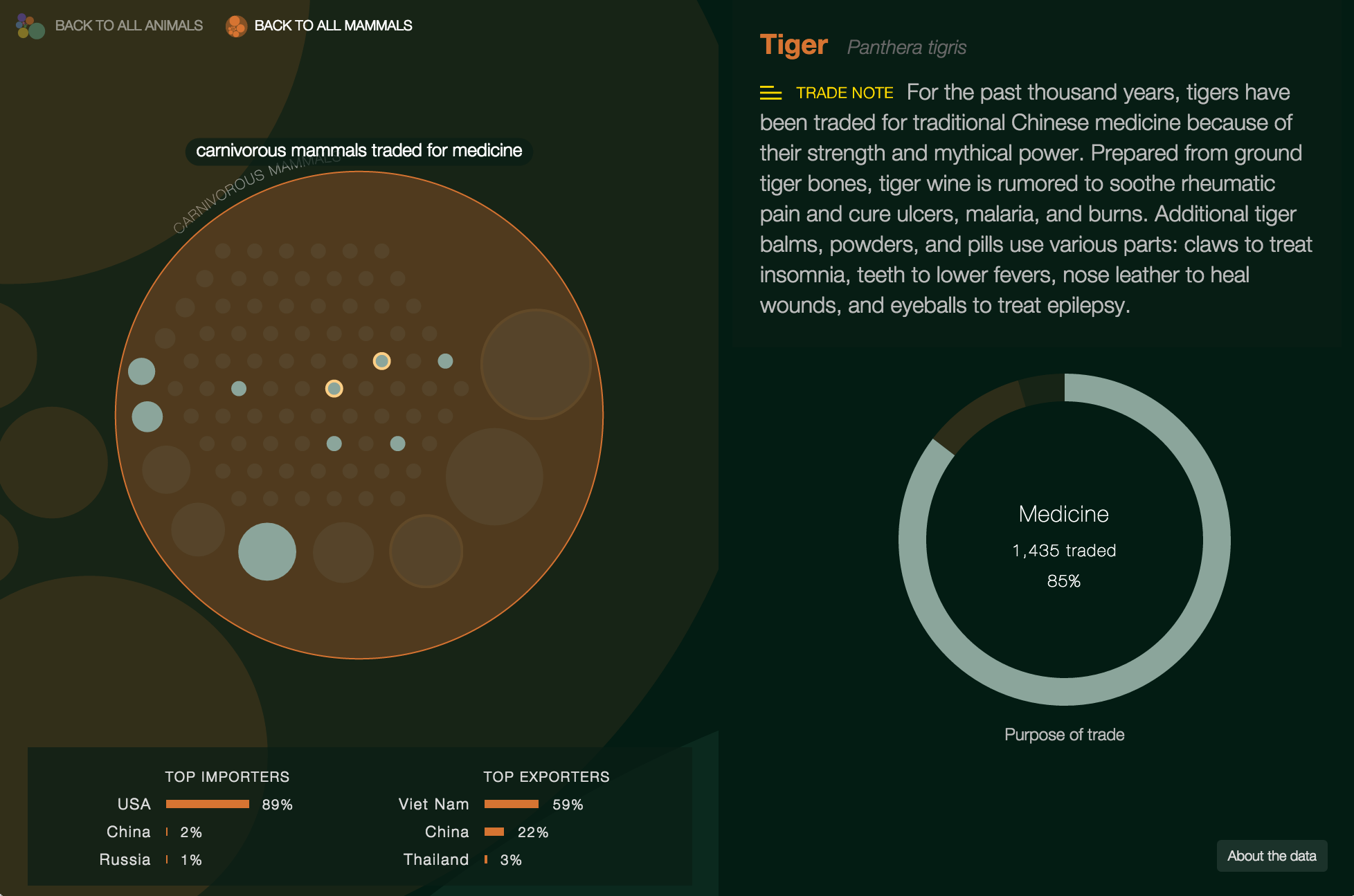 By hovering over different elements on the right-hand chart, users can see shared uses for different species. Here you can see all carnivorous mammals used for medicine.

The visualization also shows the top three importers and exporters of each animal, so users can get a geographic understanding of the main channels of trade. France is the primary exporter of the muscovy duck, the most traded bird in 2013. After digging further, we learned that a French homeopathic manufacturing company produces a drug from the duck's liver and heart, and the flu medication is widely circulated worldwide. While the geography of trade didn't turn out to be our most compelling point, it certainly made for a useful way to contextualize the data. 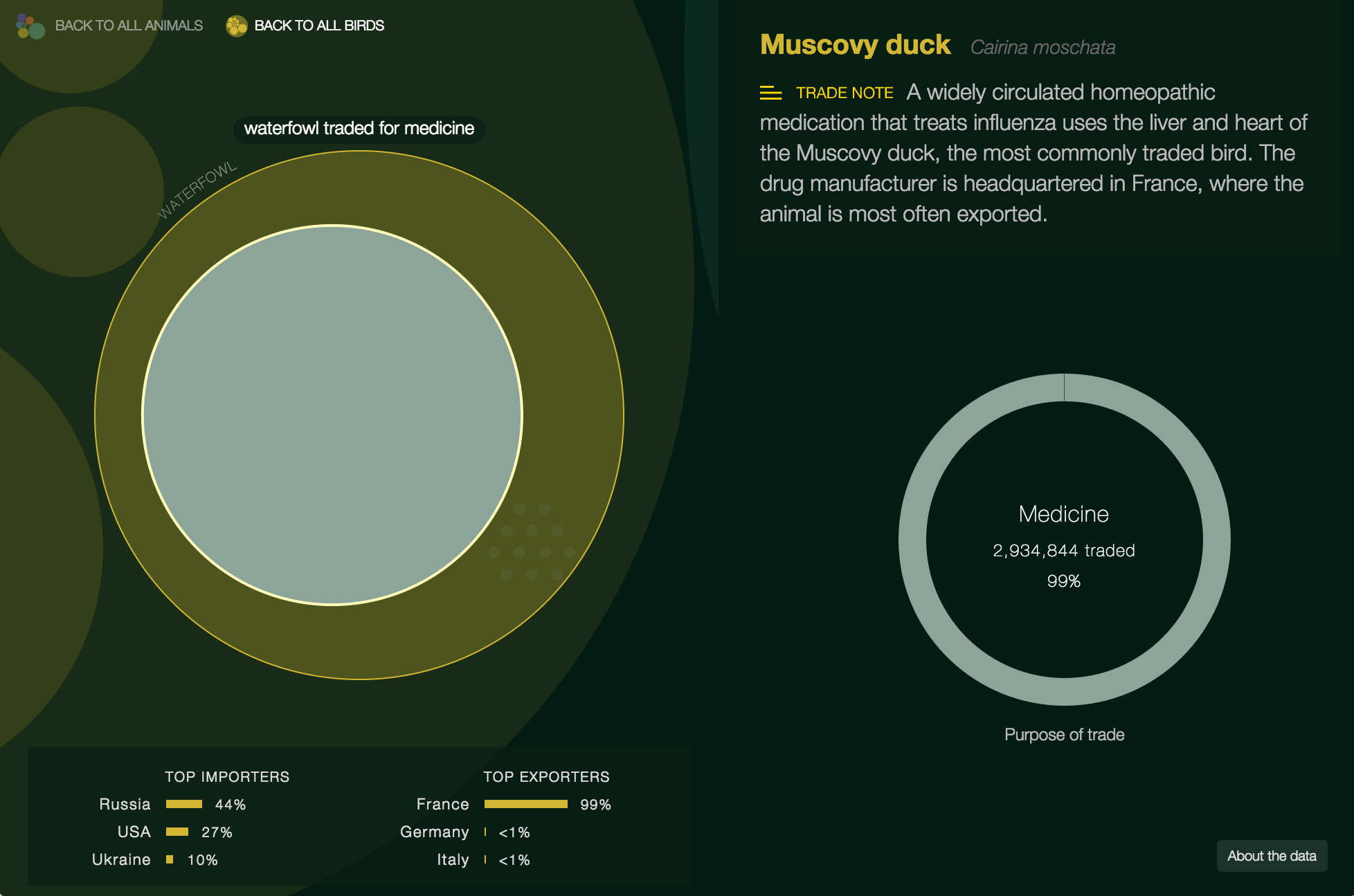 99% of muscovy duck trade is for medicinal purposes, nearly all exports are from France (likely from the homeopathic drug manufacturer, Boiron).

The project sources data from the CITES (Convention of International Trade in Endangered Species of Wild Fauna and Flora) Trade Database. The full database holds over 13 million records of more than 34,000 plant and animal species. The data we explored includes the trade of all animals listed in CITES' appendix II, which contains animals that are not necessarily threatened with extinction, but that may be if their trade goes unmonitored.

If you feel uneasy about what you've read but strangely compelled to learn more, visit the site. Share it with your friends. Talk about it later over a glass of tiger wine and some turtle jelly laden toast, if that's your thing.